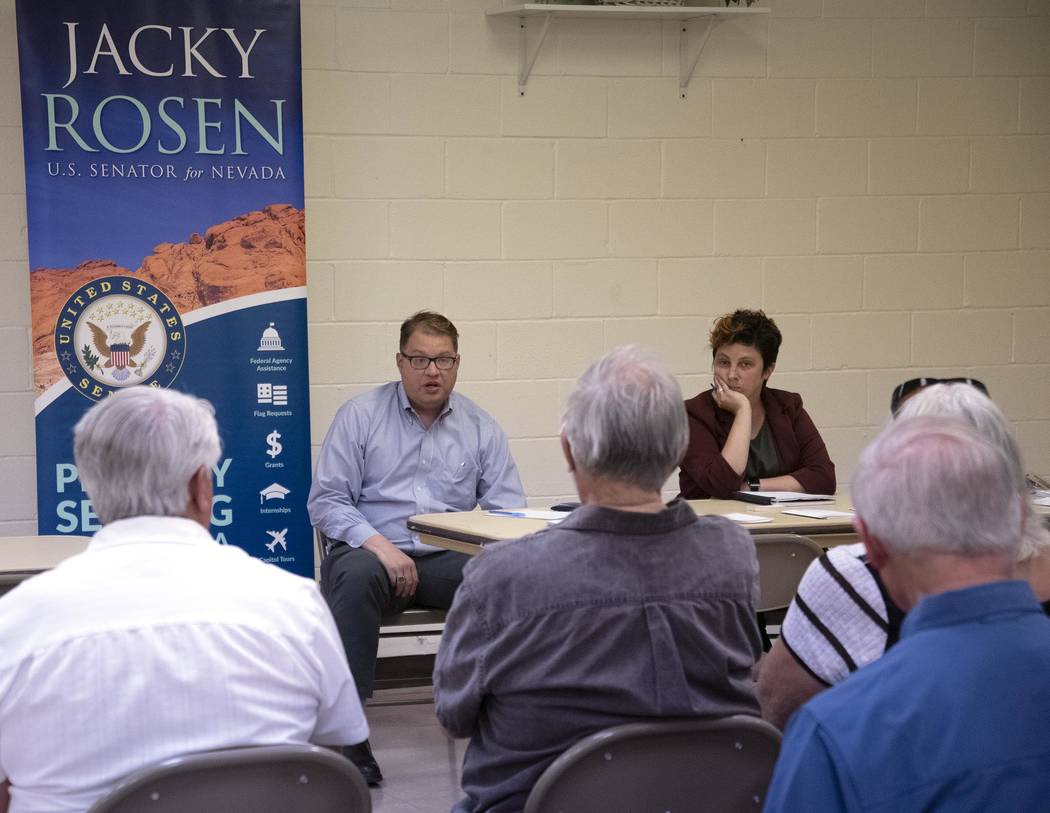 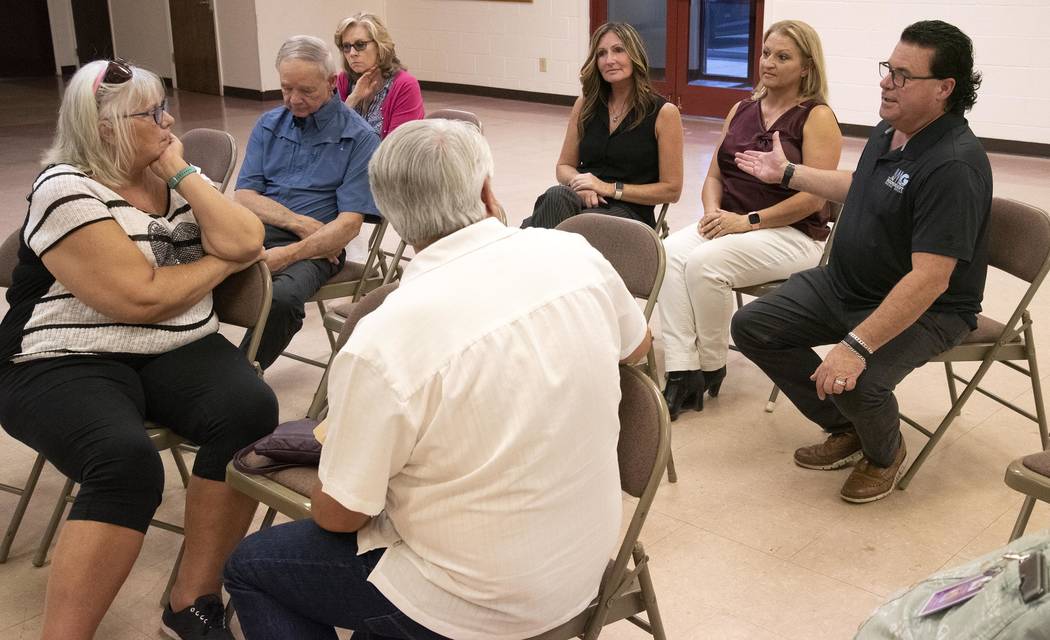 Richard Stephens / Special to the Pahrump Valley Times Dr. Michael Reiner (right) and two of his staff members spoke to representatives about the level of health care in Beatty at the meeting.

“If you don’t use what you have, you won’t get more.” Those words from Brendan Vargas encapsulated the biggest problem with Beatty’s current level of health care.

Vargas, and April LaLone, both from U.S. Sen. Jacky Rosen’s Las Vegas office, were in Beatty on Aug. 22 to gather information on health care issues facing the rural community.

Dr. Michael Reiner, who operates the Beatty Clinic, acknowledged that the current level of service at the clinic is not satisfying to the community. The clinic is open five days a week, but nurse practitioner Markeeta Araujo is at the clinic only every other Friday to see patients.

Reiner noted that the rest of the week, patients are able to arrange to receive care through telemedicine, “But that isn’t very satisfying for people used to seeing a doctor. Millennials are fine with it.”

The doctor said that the inability to have a provider at the clinic on a more regular basis is a problem with economics.

“This is not a profit center,” Reiner said. “It’s just about providing care, about serving the community.”

However, he explained that it is a business, and it is not economically possible to staff the clinic more fully when it is not being used enough to cover the cost of doing so.

He said that the clinic’s financial woes have two main causes.

First of all, he said that, for whatever reason, many patients stopped using the Beatty Clinic when his office took it over from Nevada Health Centers (NHC). This happened when the county was no longer willing to provide a hefty subsidy to NHC to keep the clinic open.

Many of the patients who stopped using the Beatty Clinic have been using the clinic in Amargosa Valley, which is still operated by NHC.

The community of Amargosa ponied up $30,000 to keep their clinic open, said the doctor, but he said that was not much of the total cost of operation.

When fewer people use the Beatty Clinic, it means less revenue to pay for the cost of staffing it.

“I have the help. Now I just need the funding to be able to have them up here,” Reiner said.

Everyone involved in the discussion agreed that getting more people to use the clinic would make it possible for it to provide more service.

Araujo said she’d love to see more patients when she is in Beatty, saying that they’ve had a lot of cancellations. “We need to get people coming so I’m not twiddling my thumbs all day.”

Vargas and several Beatty residents said that the clinic needed to do more to get the word out about their services and to encourage patronage. One suggestion was to make use of the town’s news website on Facebook and the bulletin board at the Post Office.

Another financial problem is that, according to Reiner, NHC still holds the official federal designation as provider for the area, which prevents him from applying for grants to help fund the clinic. Vargas said the senator’s office would look into that.

One complaint from residents about the Beatty Clinic, 250 S. Irving St., is the lack of pharmacy services. Patients have to travel to Pahrump or Las Vegas to get prescriptions filled. Reiner said that this is something else that he had plans to do, but has not been able to because of lack of finances.

During a discussion on the problem of getting prescriptions from a pharmacy to Beatty, Gus Sullivan pointed out that the county has a courier who travels every day between Pahrump and Tonopah. He suggested exploring that as a possible way to solve the problem.

Vargas also suggested that the clinic might look into the possibility of using interns from the new UNLV School of Medicine to help staff the clinic. He did say that the school is new, and it might not be possible initially, but that as it continued in operation there would be a continual “pipeline” of possible providers.

Vargas also said that even in Las Vegas they have a problem with not enough doctors and specialists. He said this a problem throughout the state.

Vargas asked how many veterans used the senior center for meals. He suggested that, if there was a sufficient percentage of veterans, they might be able to seek additional funds through the Nevada Department of Veterans Services.

“Sometimes you have to get creative,” he added, saying that funding to help a particular group can benefit everybody.

LaLone said, “It all comes down to it really takes a village.” She said that everyone, regardless of political leanings, needs to work together to get things done.