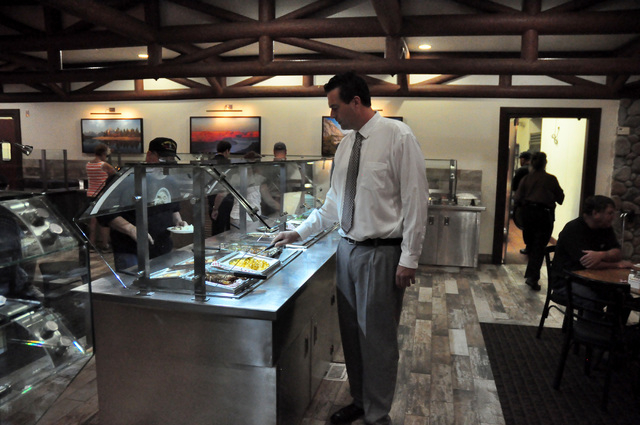 Regular patrons at the Lakeside Casino and RV Resort are enjoying the recent upgrades and renovations inside the dining room of the south end establishment.

The property, which is owned by Las Vegas-based Golden Gaming, has introduced a new buffet that the company hopes will help bring more food options to the property.

Golden Casino Group Manager Lori LeBlanc said customers can expect to see ongoing changes to the menu from now on.

“The game plan changes every month where customers have different things they can choose from,” she said. “We do try to have a special burger each month to give folks a variety.”

LeBlanc said the customer response has been “fantastic” since the renovated buffet was opened May 1.

“They like the openness and the light of the room dining area they love the way the buffet line looks and we’ve had a lot of very positive feedback.”

Food and Beverage Director William Bills said management was looking to improve the overall look of the dining room’s interior.

“The dining room was a little bit old and outdated so we wanted to brighten it up and make it a little more lively,” he said. “We added more space by taking out some rails and made the room feel real lofty.”

He added little touches such as We now have lighting under the desserts and under the hot line brightens the food up, making it more inviting.

Additional accents include the newly painted ceiling to brighten the dining area.

All of the booths were re-upholstered and new artwork brought in for a better presentation of the buffet and dining room.

Bills said management wanted to maintain the western feel of the establishment.

“We kept the integrity of the room with the wooden beams up above and the antler chandeliers,” he said. “We still wanted to keep what Lakeside was all about but we just wanted to update the room.”

Golden Gaming Pahrump General Manager Jeremy Jenson said the location has seen a boost in business shortly after the renovations were completed.

“We have noticed an uptick in business and it’s been fantastic this past month,” he said. “We’re doing about 500 people every Monday night for our pot roast where it’s 2-for-1 at just $9.99 and that’s pretty tough to beat here in town.”

Jenson also noted the restaurant wants to keep the price of meals reasonable for all customers.

“The cost of food is continually increasing and we try to absorb as much of that as possible without passing that along to the guest,” he said. “We also want to keep the price point as low as possible for the local residents.”

In addition to the interior renovations, efforts were made to spruce up the establishment’s exterior.

“The parking lot was also resurfaced and we cleaned up a lot of the exterior,” he said. “We revamped all of the lighting around the building as well as a lot of landscaping in the RV park. Part of it was general maintenance, but you can also call it a spring cleaning.”