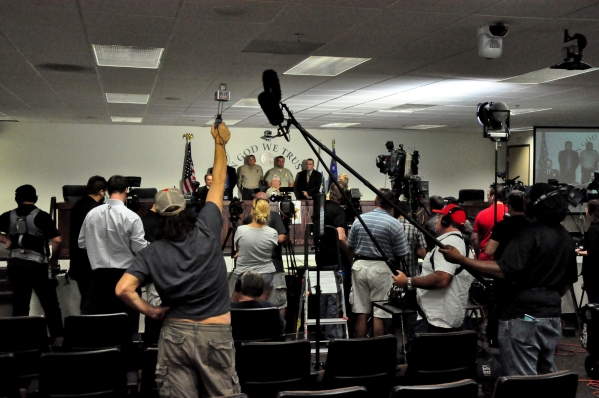 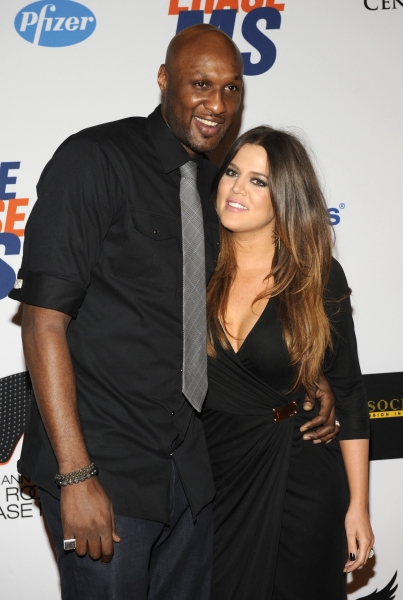 Odom is still clinging to life at Sunrise Hospital in Las Vegas.

Several dozen news outlets converged on the county commission chambers, with some arriving from as far as California to learn the facts around what happened on Tuesday.

Every Las Vegas news outlet led with the Odom story on their Wednesday evening broadcasts.

Brian Skoloff, an Associated Press writer and video journalist said he wanted to learn more about the brothel scene in Nevada.

“I know it’s illegal in Las Vegas but I understand it happens there all the time,” he said. “The only legal brothels in Nevada are in communities where the population is 700,000 or less.”

Several hours after scheduling the 4 p.m. press conference, sheriff’s department officials were forced to move the venue from the tight confines of the Nye County Sheriff’s Office, to the Nye County Government Complex where news producers and anchors were sending live reports back to their respective stations.

After establishing the basic facts, Wehrly played several 911 recordings from brothel employees requesting an ambulance to the Love Ranch.

During another 911 call, a man was heard telling dispatchers that the former Los Angeles Laker told Love Ranch employees he had used cocaine during the weekend.

“He apparently had some cocaine on him that he finished, on Saturday,” the man said in the call.”

“So as far as you know, there’s no cocaine since Saturday?” the dispatcher asked.

“That is correct,” the man replied.

Though the quality of the audio was poor, producers and reporters held microphones toward the ceiling to capture the dialog.

Representatives of national television shows such as Inside Edition and E News led their broadcast with the Odom story.

Odom won two championships with the Los Angeles Lakers and found more recent fame after marrying into the Kardashian family.

He also starred in his own Kardashian spinoff reality show with his wife, Khloe Kardashian.

Though the two are still legally married, they both signed their divorce papers in July. Their divorce is awaiting final approval from a judge. It has been widely reported that Kardashian is making medical decisions for Odom.