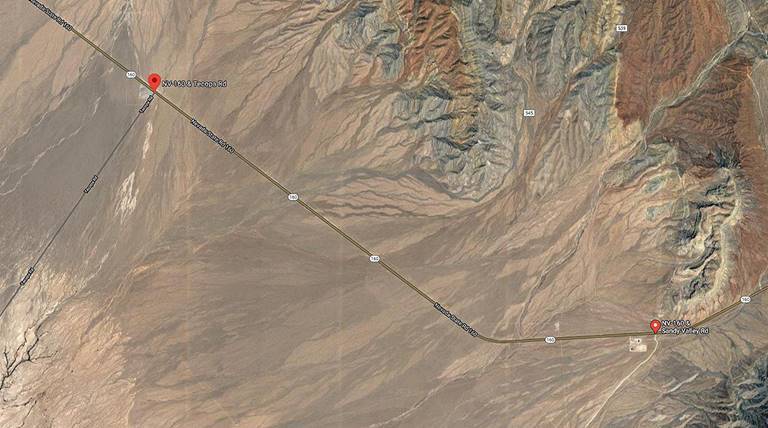 Nevada Department of Transportation Motorists should expect delays along Highway 160, between Tecopa and Sandy Valley roads, from 5 a.m. to 5 p.m. on Saturday and Sunday, according to NDOT.

The Nevada Department of Transportation announced possible delays along Highway 160, between Las Vegas and Pahrump, on Saturday and Sunday, due to a group shooting for a world land speed record attempt for a production car.

SSC North America will run its Tuatara hypercar down the Pahrump to Las Vegas route over two days in an attempt to take down the current speed record, according to NDOT.

A previous attempt was done by the Koenigsegg Agera RS, which pulled its record run on the same stretch of road in 2017 that the Tuatara will blast down. In 2017, the Agera RS hit an overall average of 277.9 mph on a two-way run at that time, breaking a 267.8 mph record set by a Bugatti Veyron Super Sports model in 2010.

Motorists should expect delays along Highway 160, between Tecopa and Sandy Valley roads, from 5 a.m. to 5 p.m. on Saturday and Sunday, according to NDOT.

“Southbound travel will be diverted into the northbound lanes with the Nevada Highway Patrol coordinating traffic during a special two-day filming event,” NDOT stated in its press release. “Motorists should be prepared for minor travel delays.”

For the latest state highway conditions, visit nvroads.com or call 511 before traveling.

NDOT also works with Waze to inform motorists about planned restrictions, though things such as unscheduled construction changes, closures and restrictions are possible because of weather, along with other factors.