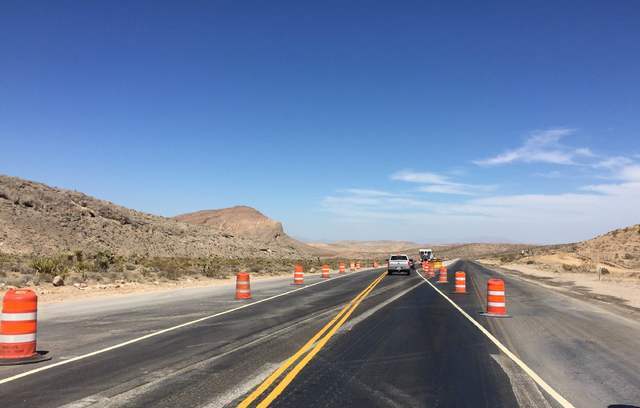 Traffic shifts onto a newly-paved portion of State Route 160 about midway through the work zone when heading south on the corridor linking Pahrump and Las Vegas. A five-mile stretch of road is being widened from two travel lanes to four. The project is expected to be complete in early 2017. Mick Akers/Pahrump Valley Times

When you drive over the hump to Las Vegas you might notice a change when you get to the construction portion where the two-lane State Route 160 is being widened to four lanes.

Traffic shifts onto a newly-paved portion of SR-160 about midway through the work zone when you’re heading south on the corridor linking Pahrump and Las Vegas.

A pilot car operation took place Tuesday night to set up the lane shift. The shift marks the last day of new paving for a while, according to Nevada Department of Transportation spokesman Tony Illia.

During the lane shift, crews repaired the shoulders for temporary striping and the contractor, Aggregate Industries-SWR Inc., set up a pilot car operation for that Tuesday night to change the striping, shift the traffic onto the new pavement, and shift over the barrier rail, among other minor work.

The barrier rail will be reset in the new configuration for the next few days.

In the coming weeks there will also be work in the late-night trailhead area, including landscaping and a new kiosk structure.

The $16.5 million highway widening project, taking place between State Route 159 and mile marker 16.63 on SR-160, is on time and should meet its scheduled early 2017 completion date.

A one-mile portion of SR-160, from SR-159, opened in June, due to houses being near the construction zone. The rest of the five-mile project will open once the rest of the four miles are complete.

Besides the widening, other work calls for flattening side slope shoulders for safer vehicle turnouts, plus installing new drainage pipe, placing guardrails and hydro-seeding 38 acres.

Bicycle lanes on each side of the highway are included in the highway widening design, but as construction continues, the bike ban on the highway is still in place.