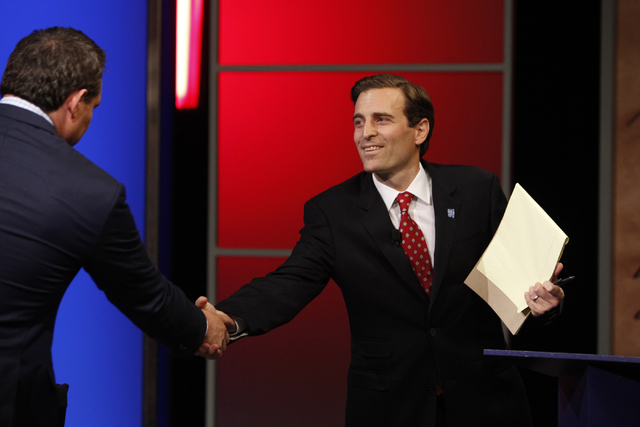 LAS VEGAS — Friday’s face-off between Nevada attorney general candidates Adam Laxalt and Ross Miller seemed more like a no-holds-barred boxing match than a debate, with contenders landing a few low blows while accusing one another of running dishonest campaigns.

As he did in their first debate, Laxalt, a Republican, pounded the Democratic Miller for accepting more than $70,000 in gifts while serving as secretary of state, including from big business and special interest groups that could result in conflicts of interest for the state’s top attorney.

He also accused Miller of playing a role in the release of an internal document from Laxalt’s law firm that called him a “train wreck” as a lawyer. Miller donated $50,000 to the Democratic Party, which is running an attack ad against Laxalt featuring the performance review notes. Laxalt’s law firm, Lewis Roca Rothgerber, later said the notes didn’t reflect the good work Laxalt had done.

Miller counterpunched, accusing Laxalt of being secretive by not revealing all of his military records and challenging Laxalt’s abilities as a lawyer, saying he’s not qualified for the job. Miller also dismissed Laxalt’s legal work in Iraq as a U.S. Navy judge advocate general handling terrorism cases, suggesting he was a mere paper pusher and doesn’t have any real prosecutorial experience.

“It’s very concerning to me that he would take this many gifts from special interests,” Laxalt said in one of the more heated exchanges between the candidates.

In response, Miller dismissed Laxalt’s legal experience, which includes working several years at a Las Vegas law firm after serving as a JAG in the U.S. Navy.

“He has not even practiced law long enough to run for judge,” Miller scoffed. “… The people who know him best say he isn’t qualified for this job.”

Laxalt objected, noting he released several military job performance reviews that gave him rave reviews as a JAG officer, including for the seven months he served in Iraq where he determined which terrorism cases should be prosecuted.

“We put out my military records,” said Laxalt, who served in the Navy for five years and in Iraq in 2006. “They said I was an outstanding attorney and I worked in the most challenging environment.”

Laxalt noted that Miller could have served in the military but decided to stay home instead and “climb the political ladder” as he eyes the attorney general job as a stepping stone to becoming governor like his father, former Gov. Bob Miller, a Democrat, who was in the debate audience.

Laxalt pointed out he has been endorsed for the AG’s job by 15 of Nevada’s 17 sheriffs and by most of the county district attorneys as well. GOP Gov. Brian Sandoval, a former attorney general, also backs Laxalt for the position.

“They said I would do the best job for Nevada,” Laxalt said.

Laxalt, who has pledged not to take any gifts, challenged Miller to stop taking freebies.

Miller accused Laxalt of mischaracterizing the issue. He said he reported more gifts than any other state official because he believes in full disclosure and has fought for stricter reporting laws.

“I’ve been a pioneer on this issue, in reporting absolutely everything,” Miller said, adding he has had no conflicts of interest in accepting the gifts, including from lobbyists.

As for Laxalt’s work in Iraq, Miller said, “It seems like you were processing paperwork.”

“So I take great offense that you’ve attacked my military record,” Laxalt added, then landed another blow. “What you’re a pioneer of is in receiving gifts. … What do these people want from you?”

Miller replied, “There’s no conflict there. This isn’t much of an issue.”

Still, asked if in hindsight he would have refused some gifts, Miller said yes.

“Given the amount of attack ads, I would have taken a different course,” Miller said.

Nonetheless, the Democratic candidate said the real issue in the race is experience. Miller said he’s been endorsed by groups representing 4,000 police and prosecutors who trust he’ll do a good job.

The debate was moderated by Review-Journal columnist Steve Sebelius and journalist Elizabeth Thompson.

In their opening remarks, both candidates pledged to protect Nevadans from fraud and abuse, particularly children and senior citizens who are vulnerable to financial scams.

Once the questioning began, however, the candidates looked to undermine voter confidence in their opponent in a close race and with early voting starting in one week on Oct. 18. It continues for two weeks before the Nov. 4 Election Day.

Asked why Nevada is a haven for con artists, Miller said it’s partly because of the growing retiree community that is “susceptible to fraud.” He said that while leading the securities division for eight years he has cracked down on scam artists, resulting in big fines and long prison sentences.

Laxalt said he thinks of his 88-year-old great aunt being taken advantage of and wants to offer senior citizens more help to combat fraud. He suggested a hotline for potential victims to call “to make sure seniors know there’s an outlet to get help.”

“Experience is a major difference in this race,” said Miller, who was a Clark County prosecutor before becoming secretary of state. “I commend Mr. Laxalt for his military service but he hasn’t looked the seniors in the eye. I have. … That’s why I’ll be ready on Day One.”

The next question went to Laxalt, asking if he had any proof to back up his contention that Miller had something to do with leaking documents from Laxalt’s law firm that included notes for a bad performance review — notes Laxalt says he never saw before.

Laxalt said Miller gave $50,000 to the Democratic Party to help pay for an attack ad using the documents.

“Using these documents was shameless,” Laxalt said. “My law firm said these are simply false misrepresentations. Nevadans are fed up with this kind of attack campaign.”

Miller fired back, “He has no evidence. … I don’t know who put these documents out in the public,” Miller said.

The debate also dealt with some hot-button issues, including same-sex marriage, which is now legal in Nevada following a 9th U.S. Circuit Court of Appeals ruling this week.

Laxalt said he believes that marriage is between one man and one women. But he said as attorney general he would uphold the law, even if he doesn’t personally agree with it. He compared it to the military where soldiers must follow orders except in rare cases.

“I am going to defend the law regardless of my personal views,” Laxalt said. “People are tired of judges and attorneys general picking and choosing laws they like or don’t like based on their personal views.”