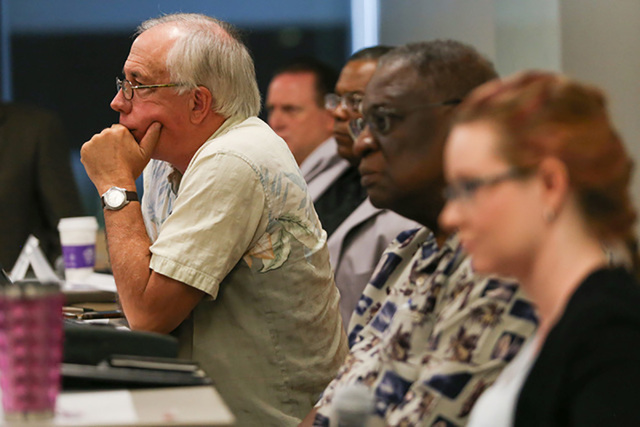 Pat Hickey, leaning forward, the Nevada coordinator for Smart Approaches to Marijuana, listens to a question during a panel discussion on the legalization of marijuana at the University of Phoenix in Las Vegas on Sept. 10. Brett Le Blanc/Special to the Pahrump Valley Times

LAS VEGAS — In November, Nevadans will vote on whether to legalize recreational marijuana — Question 2 would allow adults 21 years and older to possess up to 1 ounce of marijuana legally. On Saturday, a panel of experts mainly argued that legalization might be a bad idea.

Earl White, former director of Weed &Seed Program, a crime and drug abuse prevention group, was one of five speakers who met Saturday at the University of Phoenix Las Vegas campus, 3755 Breakthrough Way. He was adamantly against legalizing marijuana for recreational use, arguing pot use lessens someone’s motivation to study or find work.

“(Nevada is) already last in education and behind in unemployment,” White said. “There is no way that legalizing marijuana is a good thing for the community.”

Booze, he said, has turned out to be more of a money drainer than a moneymaker for society; taxing something problematic does no good.

Marijuana may be more dangerous than ever, Hickey suggested, because it’s grown in potency. Tetrahydrocannabinol or THC, the main psychoactive ingredient in marijuana is 20 percent to 30 percent more powerful in current strains than it was during his college days decades ago.

“President (Barack) Obama said studies have shown that young people who habitually smoke marijuana have a 28 percent chance of dropping out of high school, are more apt to do poorly on college entry exams, more apt to drop out of college and see a decrease in intelligence quotient,” Hickey said.

Sgt. Craig Lousignont of the Metropolitan Police Department said marijuana use might have factored in the city’s rising crime rates.

“It’s a cash crop, black market crop, crime has gone up because of it and it will negatively impact the city,” Lousignont said.

John Carter of the University of Phoenix faculty said political hype may be distorting people’s views on marijuana and making the measured discussion about the drug impossible. He said people need to learn before they argue.

“There has been so much misinformation about marijuana. It’s gonna make us kill and rape people — that turned out to be a lie,” Dr. John Carter, a University of Phoenix faculty member, said. “We need to talk about the facts. Let’s educate — take out politics and talk about people.”