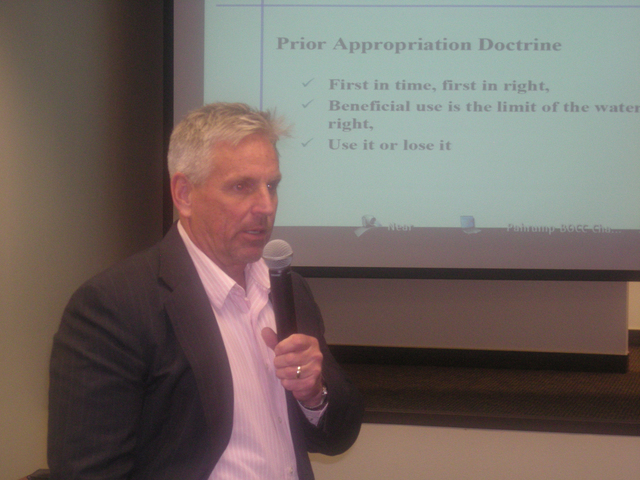 Three water bills that could have significant impact on water users in Nye County and statewide if passed are scheduled to be brought before Nevada legislative committees this week.

County officials are keeping a close eye on Senate Bills 81 and 65, which are scheduled for additional work groups today and Thursday respectively. Following the work groups, state Division of Water Resources Engineer Jason King will present modified bills to the the Government Affairs Committee for a work session vote. A vote on the those bills will likely not take place until April 3, or later, according to committee spokesperson Gena Plummer.

Nye County Water District Consultant Oz Wichman reported at a monthly meeting of the district on Monday, that the three work group sessions have previously been held on the modified bills, originally introduced in the Senate on Feb. 11.

Though Wichman said he has not heard outcry from any Nye County Water District board members, people state- and county-wide seem to be divided into two camps regarding bill language.

One group wants the state water engineer, who is tasked with enforcing Nevada Water Law, to have the “administrative flexibility” to perform the functions of the job. The other group, he said, is worried about future abuses of authority.

Nye County Commissioner Dan Schinhofen shared his view of the proposed language. “My understanding of the water issues in this state is that there is the state engineer and then there is God. So I don’t see how he (King) needs any more authority than he has.”

Those fears may be driven by the insertion of bill language which includes words such as “may,” “shall,” “at his discretion,” and “without limitation.”

Wichman said his personal view of the changes in the proposed bills is that they will still allow “plenty of administrative wiggle room” for the state water engineer to do his job.

Whether the bills are reflective of Nye County’s position with regard to the future permitted use and restrictions of water, one thing that remains clear, Wichman said is that, “It’s not a one-size-fits-all world.”

Of note in Senate Bill 81 is a proposed language that will permit “water-banking,” advocated for by the Nye County Water District. Though at odds with current Nevada water law, it would allow the state water engineer to endorse and ultimately enforce the concept if placed in an approved municipality’s groundwater management plan.

Assembly Bill 347 appeared on the agenda for Tuesday, March 24. That bill, if passed, will allow the state water engineer to require the drilling of a conservation well, rather than a domestic well, with a water consumption restriction of no more than one-half acre foot per year – as opposed to the two-acre feet per year currently allowed.

Under the same proposal, the well owner would be required to install a meter which calculates water withdrawals and file an annual report of those results with the state water engineer.

All three bills can be found at www.leg.state.nv.us/Session/78th2015.