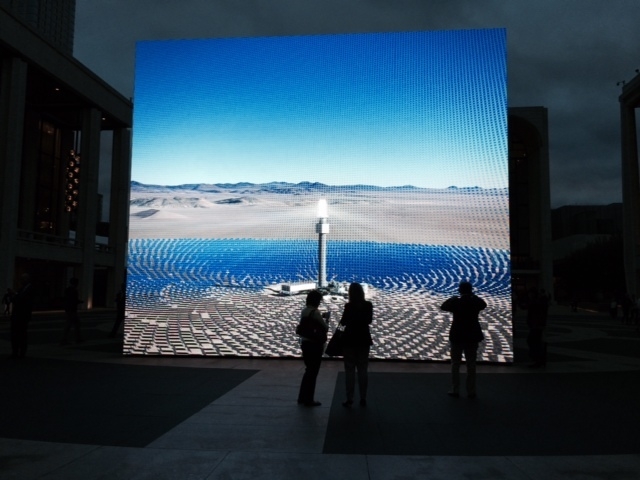 International film star Leonardo DiCaprio is donating an art piece based on the Crescent Dunes SolarReserve site near Tonopah to a famed California museum to raise awareness to climate change.

DiCaprio plans to present the Los Angeles County Museum of Art the installation, according to the Los Angeles Times. The project is based on the solar site and its thousands of mirrors which create energy from the sun. The image changes throughout the day beginning with a view from the ground looking up, through the array of pivotal mirrors and ending with the project from an aerial view.

Being an outspoken environmentalist, DiCaprio is excited about sharing the art piece with the museum to spread the word about alternative energy techniques.

“Whether it is through art or other venues, we must work to promote a healthy and sustainable future for our planet and I hope to continue to bring additional exhibits to Los Angeles and beyond that promote this message,” DiCaprio said in a statement.

SolarReserve is excited about the donation featuring one of their solar projects, and having such a high-profile figure pushing the environmental agenda.

“We are thrilled that Leonardo DiCaprio, a passionate environmental advocate and influential figure who is recognized around the world, is helping raise public awareness of the need to combat climate change,” SolarReserve said in a released statement. “His generous donation of the large digital art installation by artist John Gerrard to the Los Angeles County Museum of Art reinforces his position that industries and governments around the world need to take immediate, decisive, and large-scale action on environmental protection issues.”

John Gerrard created five editions of “Solar Reserve,” in addition to two artists’ proofs. The other pieces are shown throughout the world, including London, Istanbul and New York.

According to Gerrard’s website, the installation is a limited edition and it mimics the progression of the sun, moon, and stars across the sky, as they would be in at the solar site. The mirrors adjust in real time along with the position of the sun.

The project entered commissioning phase in February 2014 following completion of construction and commercial operation is expected to begin later on this year.

SolarReserve said they are developing similar projects worldwide, based on the technology being proven in the Nevada desert, and hope that DiCaprio’s involvement could also help draw visitors to Tonopah to check out the real solar project site.