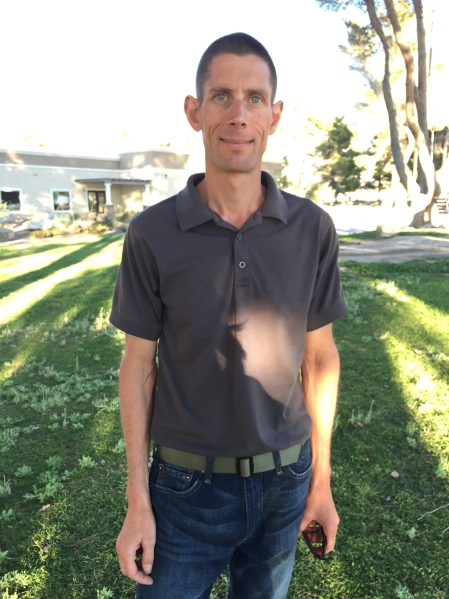 During his seven years as a Nye County geoscience manager and acting natural resources manager, Levi Kryder said he was able to learn a lot and work on some of the county’s most pivotal issues.

Kryder’s resignation will be effective Aug. 25 as he plans to relocate to Carson City where his wife got a job.

“While facing the unknown is always difficult, this is a wonderful opportunity, and I believe one that will ultimately be best for my family,” Kryder said in an email.

A Tonopah native, Kryder started working for Nye County in September 2002 as a geoscience technician after completing his bachelor’s in geophysical engineering from Montana Tech at the University of Montana. He has worked as a geoscientist, geoscience manager and acting natural resources manager for Nye County. During those years, he also obtained a master’s in water resources management from University of Nevada Las Vegas.

Nye County Department of Planning Director Darrell Lacy, who was overseeing Kryder at work, said it will be difficult to replace Kryder’s knowledge of the local hydrology and geology.

The results of the investigations were later used by the Department of Education and the national labs in support of the Yucca Mountain license application and as the basis for Nye County’s evaluation of Yucca Mountain’s safety, Lacy said.

“I have always worked hard to represent Nye County’s best interest in whatever area I happened to be working,” Kryder said. “This includes everything from making sure the data we collect as part of our science programs is valid and defensible to making sure the county’s needs are adequately considered in federal land management plans.”

“He was our technical lead for the water district, helped apply for and managed grants,” Lacy said. “This was for additional well drilling, water sampling and level monitoring in Pahrump, Amargosa and Beatty. (He) coordinated the nitrate study with United States Geological Survey, and the Pahrump groundwater models with United States Geological Survey, Desert Research Institute and Nevada Division of Water Resources and all of our other technical programs.

Additionally, Kryder took on the role of a manager of natural resources and helped to lead the county’s role in endangered species issues and managed several grants and revolving loan funds from the EPA.

It’s not yet clear who will fill the soon-to-be-vacant position, and Lacy said the county currently has a hiring freeze.

“I cannot start until approved by the board of county commissioners,” he said.

Kryder said that despite his resignation, several joint efforts such as the groundwater management plan and water resources plan update will have to be continued by the county staff.

Among some of the issues that need to be addressed are federal land use planning, water resource issues, roads, adequate health care and funding for schools, Kryder said.

“Every year, we are asked to do more with less money and fewer staff, which makes each of these challenges even tougher,” Kryder said. “That being said, Nye County has progressed tremendously in the time I’ve been around, and I’m sure, it will continue to progress after I’m gone.”