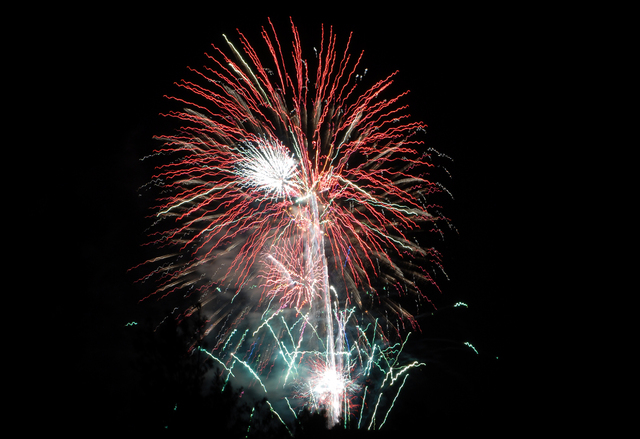 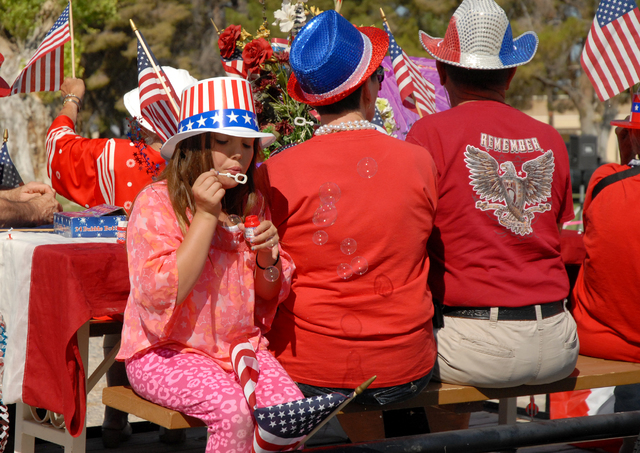 Unlike past celebrations, this year’s annual Liberty Festival is a three-day event, a first for the community, according to Pahrump Chamber of Commerce Chief Executive Officer Salli Kerr.

The festival will begin at noon Friday July 3, at Petrack Park. Kerr said it was actually the 2015 calendar that determined the extra days.

“Because the Fourth of July is on a Saturday, it just screams for three days,” she said with a laugh. “Friday we will have vendors at the park from noon to 8 p.m., where there will be water slides and bounce houses for the kids plus we have paid for the swimming pool so everybody can jump in and cool down at no cost.”

Another first Kerr mentioned was a special contest for local businesses, dubbed, “Most Patriotic Business,” where participants decorate their respective businesses with great patriotic flair, where the winner earns a trophy to display at their shop.

During the festival the names of each participating business will be announced at the park, while the trophy presentation will take place prior to the fireworks show. Businesses need not be chamber members.

“We will have judges stop by and check out the decorations and we are having a traveling trophy made out to the business who wins,” she said. “They will get bragging rights for one year. Businesses that want to join in can just call the chamber and we will put them on our list.”

Kerr also said the chamber is partnering with the VFW for Saturday morning’s pancake breakfast at the Calvada Eye, beginning at 6:30 a.m., with a special veteran’s parade at the location to follow, courtesy of County Commissioner Dan Schinhofen and Butch Borasky.

“We don’t do a veterans parade on Veterans Day so this is really important because the veterans love to see this and this is a way we can really show them how much we appreciate everything they do,” she said.

Roughly 50 vendors have signed on for the festival this year.

Kerr said there’s still room for additional vendors at the park as the deadline is next Wednesday.

“We have many food vendors and we are looking for a little more variety,” she said. “It will be a very nice selection of items for people to browse and purchase, so it’s all coming together.”

Just after sunset, attendees will witness what promises to be one of the best fireworks shows in Southern Nevada, as pyrotechnic expert John O’Brien and son Eddie will light up the sky to the delight of the crowd.

Both have decades of experience in putting on the shows.

The main body of the show will be shot by John O’Brien, while Eddie O’Brien will perform the grand finale.

Eddie O’Brien said the show, once again, will be choreographed to music on KNYE 95.1 FM that was specifically selected by he and his father.

“Every year we make it our mission to put on shows that will give you goose-bumps,” Eddie O’Brien said. “These shows are not easy to set up; they take days of preparation, being that they are electronically fired. We’re able to put on what a lot of citizens said ‘is one of the best firework shows they had ever seen.’”

The O’Briens have performed many fireworks shows at various venues over the years, through their association with Zambelli Internationale, known throughout the world as the “the first family of fireworks.”

A few years back the O’Briens were sidelined after the town chose a different company for the show.

Both were able to resume their pyrotechnic duties after town officials decided to invite them back following lackluster shows from the other company.

“Those were our sit back and watch years,” O’Brien said. “After their two years had passed, we were finally able to re-bid our contract, and won. It was also time for new shooters to get licensed, which prepared me for this show. Before I could barely walk, my dad was hired through Zambelli international and put on amazing firework shows year after year.”

Kerr, meanwhile, said this year the chamber incurred a few extra expenses due to the extra two days of the 2015 Liberty Festival.

She also said families can view a bonus fireworks show just one day prior to July 4.

On Sunday, Kerr said the weekend will wrap up with another free public swim courtesy of the Valley Cruisers of Pahrump.

“Sunday does not include vendors,” she said. “It will be simply a community worship service at 8 a.m., and we’ll have coffee and donuts for those who attend. There will also be free swimming that day.

“We added a lot of features this year, but we could not have done all that without the sponsors,” Kerr said.

As a side note, the designated aerial fireworks launch sight at the Pahrump Fairgrounds is scheduled to open this weekend, just prior to official Independence Day celebrations next weekend.

Anyone who purchases fireworks locally must obtain a $5 safety permit to legally use the variety that shoots upward.

Any type of ground-effect fireworks can be legally used at home.