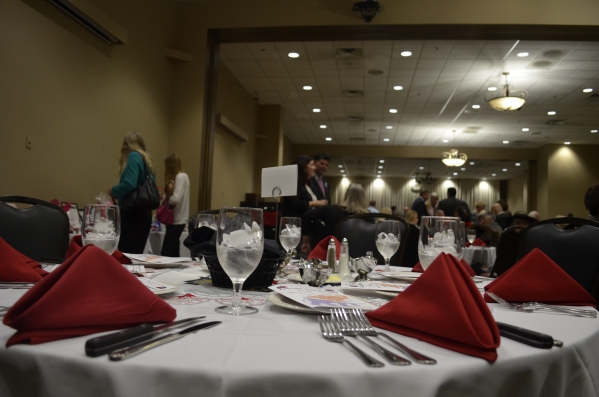 The closeness of Nevada was demonstrated at Saturday’s Lincoln Day Dinner that brought local and state dignitaries to Pahrump ahead of the Nevada Republican caucus.

The annual Lincoln Day Dinner is typically held in February or March, but this year Pahrump Valley Republican Women put on the event earlier in an effort to get across the message about the upcoming caucus that will take place on Feb. 23.

“We’ve always been really fortunate,” said Pahrump Valley Republican Women President Renae Goedhart. “The state of Nevada for being very large land-wise is a very close state. I’ve never lived in a state where you had a dinner and you got so many state officials to come to your dinner and interact with people and just talk and chat and be able to ask questions.”

A score of local and state dignitaries took to the stage to encourage those in the audience to vote in the state and general elections. Several presidential campaigns were also represented at the dinner.

“It’s really important because that’s our primary here in the state of Nevada,” Goedhart said. “If you want to vote in the primary for the president, you have to be at this caucus and put in a ballot,” she said.

Many at the event wore light purple ribbons in memory of the Pahrump Valley Republican Women’s second vice president Dorothy Oriondo, who passed away in November 2015.

The event was kicked off by a short welcome followed by an invocation that was done by Fifth Judicial District Court Judge Robert Lane, presentation of colors by the JROTC from Pahrump Valley High School, pledge of allegiance and the national anthem.

Ryan Hamilton, staffer for Ted Cruz, said their statewide campaign will go to all of the Lincoln Day dinners in the state.

“We came out to Pahrump because there are a lot of folks out here who really agree with Senator Cruz’s vision, they have a lot in common with him ideologically. And we think folks out here are more likely to vote than they are in other places, so we want to make sure they have a clear picture of his vision going into the Feb. 23 caucuses,” Hamilton said.

Goedhart, who hosted the event, said it had grown over the years.

“It got a lot bigger, it started off just as a small potluck for everybody to kind of get together and do a fundraiser and kind of have the county people get together, invite state officials and things to Pahrump. And it’s kind of grown over the years to mostly sellout crowds and lots, lots of attendees,” she said.

State Sen. Dean Heller briefed the audience on the situation in Washington, D.C. lauding the $165 billion in taxes that were cut by the Republican majority, passing the five-year highway bill and education bill.

“These are Republican principles and things that we stand on back in Washington, D.C. as well as we stand on those issues here in Pahrump,” he said.

Heller endorsed State Rep. Joe Heck, who will run for U.S. Senate in hopes of taking the outgoing Harry Reid’s seat. Heck addressed the crowd in a video message.

State Representative Cresent Hardy said he enjoys visiting Pahrump, one of the largest towns in his predominantly rural district. In November, Hardy will face off against four democratic candidates who had announced their bids last year.

“This is in my district. This is one of my biggest rural communities in District No.4. It’s also one of the places I enjoy. I think there are a lot of like-minded people around here in these areas,” he said.

Assembly candidates for District 36 Tina Trenner and Rusty Stanberry also spoke to the crowd, each talking about their agendas in the upcoming Assembly election.

The proceeds from the fundraiser will go toward campaigns and political functions.