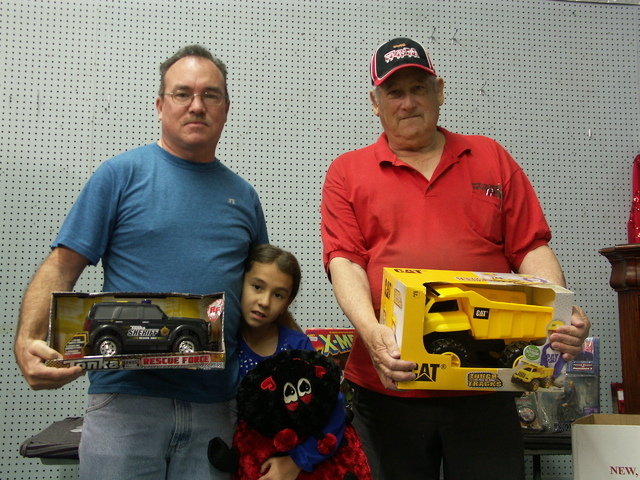 The event invited attendees to bring an unwrapped toy for Toys For Tots.

Nevada Public Auction owner Ron Chase said the party allowed the auction house to thank the community for its continued support over the years.

“It was a nice customer appreciation party for all of our auction customers,” he said “The owner, Wendy Black, gave us a very nice spread with food and we also did a couple of different drawings.”

During the party, Chase said auction customers donated items to the local Toys For Tots program as well as regular bar patrons.

Additionally, Chase presented a monetary donation to the organization.

“We had a 50-50 drawing, so we’re also going to give the Marine Corps League a check for $200 for the program in addition to the toys that the customers brought in,” Chase said. “Spring Mountain Motor Sports Ranch brought us a gift certificate for laps around the track and we gave that away to one customer. Today we are giving away 67 toys for the local Toys For Tots organization.”

Though it’s the first time Chase held a customer appreciation party, he said the auction regularly supports the program.

“We plan to continue doing this,” he said. “It was a fantastic response and I can tell you that next year will be twice as big with twice as many toys and money.”

“Locally, we’ve been doing this for about ten years,” said Ed Cima, assistant coordinator for the Pahrump Marine Corps League, who sponsors the Toys For Tots program. “People have been very generous this holiday season because we have the boxes set up all over town.”

“We have about 93 members in my detachment, but they don’t all live here,” he said. “Some of them have since moved because we have two in Oregon, one in Washington, Minnesota and Virginia Beach. They are all over.”

The party brought out more than 60 customers, Chase said.

“It was good participation and we all had a lot of fun,” he said. “We had some return customers who are just like family and we appreciate all of their support.”