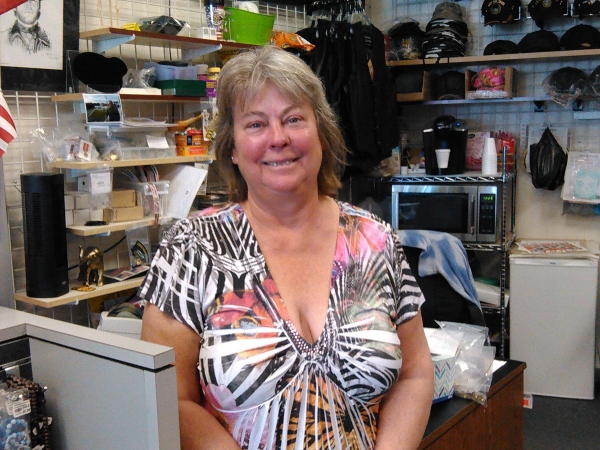 New York transplant Cindi Vroenen was a 10-year-old girl when the World Trade Center Towers were completed back in 1969, but she never got the chance to visit the skyscrapers until 1980, when she went back to visit friends.

During that time she took the elevator to the top floor observation deck and was both amazed and terrified as the building began swaying.

“I was on the 110th floor just shaking because obviously they’re so tall and it’s very windy up there,” she said.

This week Vroenen lamented she’ll never have the opportunity to visit the very symbol of American capitalism and New York City’s most famous landmark.

As a tribute to the towers, Vroenen and her husband George plan a special September 11 ceremony at their business, G.I. USA, located in the Albertson’s Plaza.

On hand will be two 9/11 first responders, who will be recognized for their bravery, tonight at 6 p.m.

“One of the first responders here in town was there on that day and he is still suffering the effects of all the dust and ash,” she said. “You have to keep in mind that a lot of that stuff had very dangerous and toxic chemicals in it.”

Though it’s been 14 years since the tragedy, Vroenen said she expects the ceremony will evoke a lot of feelings from local residents.

“This town is full of easterners and veterans,” she said. “Something like that should never have happened and this ceremony is basically designed so people will never forget what happened and how many lives were lost. It’s important that we all remember that and pass it down to our children.”

Other attendees include members from the Pahrump Valley High School’s JROTC program.

“We will also have Retired U.S. Army LTC Patrick Nary from the high school’s ROTC program who will be holding the sermon and he will also commemorate the two first responders,” she said. “We are making some personalized gifts for those first responders to thank them and all of our emergency services personnel for what they do on a daily basis.”

More than a decade after the towers fell, Vroenen said she still gets emotional when the month of September returns each year.

She was living in California when the tragedy occurred and learned about it after receiving a call from her son, who was a student at Illinois Tech University, who told her to turn on the television.

“It’s been 14 years and it still affects me because it was my hometown and even if it wasn’t my hometown I would still feel the same way because I’m an American,” she said. “It’s something that needs to be remembered because our country should never be so unprepared. I think about the Pentagon, which is the nerve center of our military and that was attacked. It’s appalling that something like this could happen.”

After posting flyers around town and at her business, Vroenen said she’s received a big response from community members who plan to attend.

“Even on Facebook people are responding to our flyer saying they want to attend and they thanked us for holding the ceremony in the evening,” she said. “On our July 4th celebration when we fed all of the veterans there must have been 2,000 people who showed up here and it was amazing, so we are expecting a very big turnout tonight.”

The first responders will receive special commemorative coins for their respective service.

Cake and refreshments will also be provided.

Sept. 11 is now known as Patriot Day in remembrance of the tragedy.