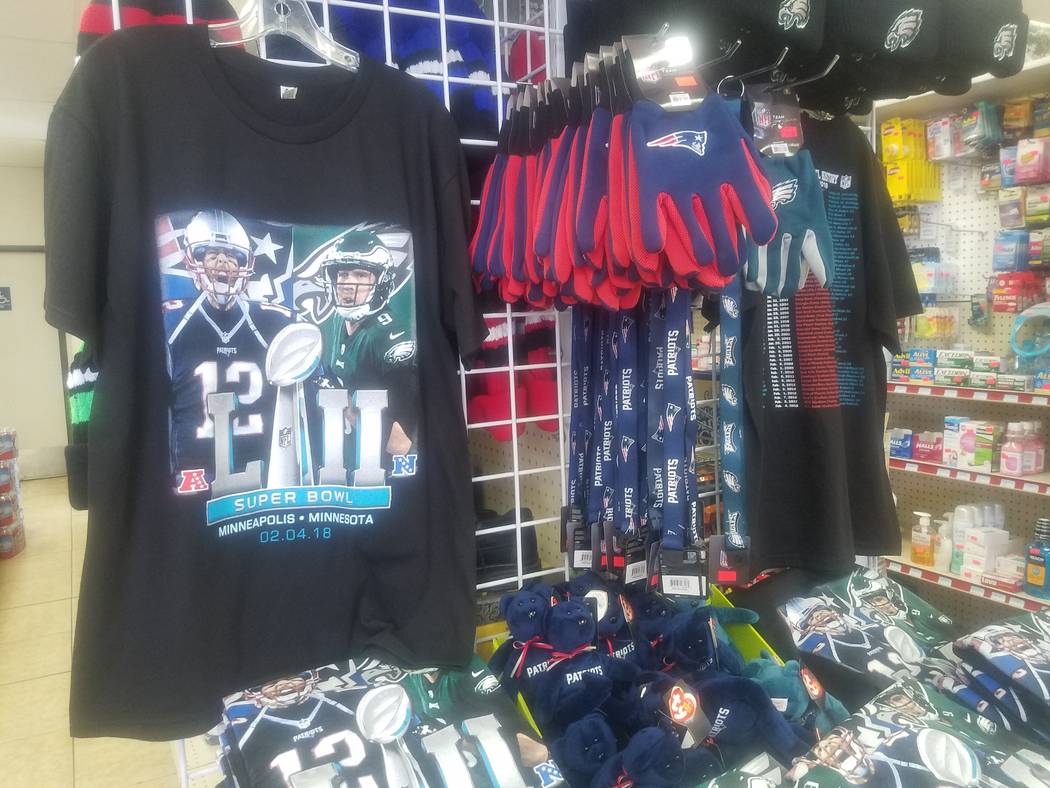 David Jacobs/Pahrump Valley Times The Mobil gas station at the northeast corner of Winery Road and Highway 160 is sporting its game-day apparel. The "big game" is set to start at 3:30 p.m. PST on NBC. 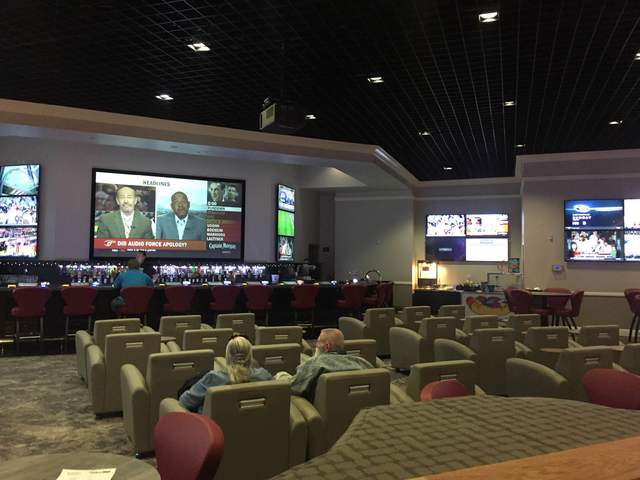 Pahrump Valley Times The Pahrump Nugget sports book will have drink and food specials on Sunday. Super Bowl LII has a kickoff time of 3:30 p.m. PST, and guests can watch at the sports book's 165-inch high definition projector screen or one of several HD televisions.

The Pahrump area is set to liven up on Sunday as Super Bowl LII watch parties bring raffles, drinks, food and fun to the valley. Several local taverns, casino-hotels and restaurants are ready for fans and the rough and tumble professional football players as they tangle for victory on the TV screen.

Ashley Anderson, marketing director at Nevada Treasure RV Resort, said the resort will be offering a buffet, snacks and the game will be on. This year, the Philadelphia Eagles take on the New England Patriots.

The cost to get into Nevada Treasure RV at 301 W. Leslie St. is $15 up until today and $20 at the door. The party will take place at Mark’s Grill at the clubhouse and in the convention center, where guests will be able to view the game from multiple screens.

Anderson said she wasn’t sure how the party impacted the resort financially. But “depending on how many people come, it’s just a whole lot of fun.”

For those closer to the south end of town, Draft Picks will also be offering festivities, with drawings and giveaways.

Pam Tobias, restaurant manager at Draft Picks, said there’s going to be giveaways such as jerseys, hats and a bunch of Budweiser T-shirts and other items on game night. Food specials and happy hour specials on draft beer will also be available, with multiple screens available to watch the game.

If you want to pick up some special Super Bowl gear, you can stop at the Mobil gas station at Winery Road and Highway 160. The store has specialized products for the 2018 game.

For those watching the game at home, this year’s program will broadcast on your local NBC station, with kickoff at 3:30 p.m. PST on Sunday. Viewers can also see the game stream live at NBCSports.com or from the NBC Sports app on game day.

Pregame shows start at 9 a.m. PST on NBC’s portals, with post-game coverage planned to begin at 7 p.m. PST on Sunday.

The game will be played at the U.S. Bank Stadium in Minneapolis, home of the Minnesota Vikings.

More places to view the game

The Pahrump Nugget is offering prizes and drink specials at its sportsbook bar on Sunday. The Nugget will also have $10 all-you-can-eat stadium food for patrons.

Guests can check out the game on a 165-inch, high-definition projection screen or one of several high-definition plasma TVs. A fully-stocked bar and bar-top slot machines are also available in the 3,500-square-foot space.

Sullivan’s Pub at 2450 W. Mesquite Ave. will host a potluck, and there is no cover. Bring your own dish.

Vince Neil’s Tatuado Wildside Tavern at 2101 E. Gamebird Road is offering free food and lots of giveaways, with accommodations that include nine HD TVs and a state-of-the-art sound system, according to a post on the establishment’s Facebook page.

Also, guests will enjoy specials on pints of domestic beer, with buckets of beer for $10 and other deals. There’s no cover to get in.

The Hubb will also have a place for patrons to check out the big game on Sunday. Check it out at 3720 W. Bell Vista Ave.

Big Dick’s Pizzeria at 3971 E. Kellogg Road will have games, drink specials and a buffet, along with raffling off a jersey.

The Bounty Hunter Saloon at 680 East Street is hosting an all-you-can-eat potluck with drink specials, along with raffles and giveaways. The saloon’s party starts at noon on Sunday.

The Hideaway Bar at 4760 S. Pahrump Valley Blvd. will have giveaways, food and Super Bowl fun.

A Super Bowl party at the Mountain Falls Grill Room is sold out Sunday. Tickets were $30 each. For more information on next year’s game or other issues, call 775-537-6553.

This may not be an exhaustive list of events and parties.