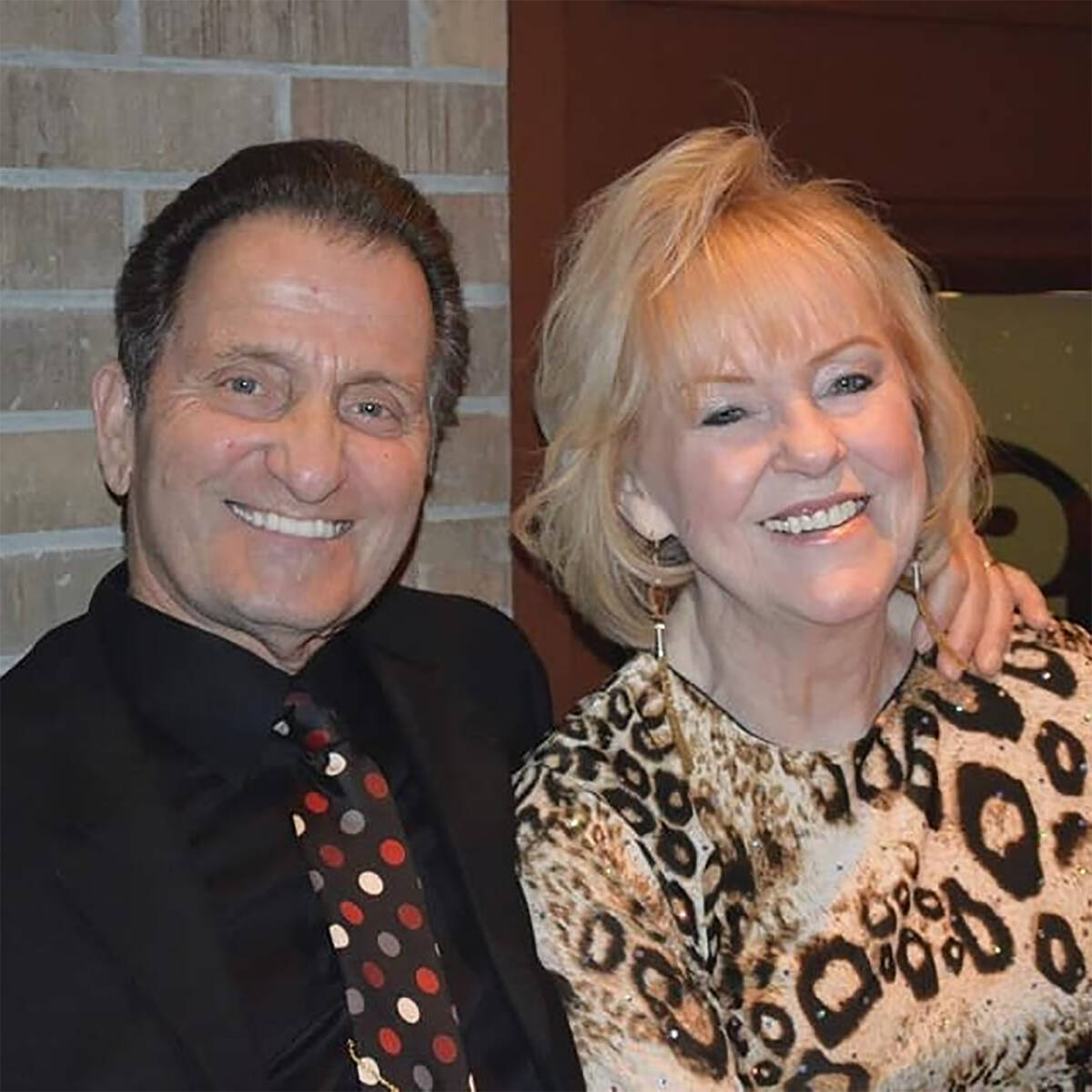 Special to the Pahrump Valley Times Tom Saitta and his wife Alice enjoy a tender moment during an evening outing together. Saitta passed away in the early morning hours of Friday, Sept. 3. 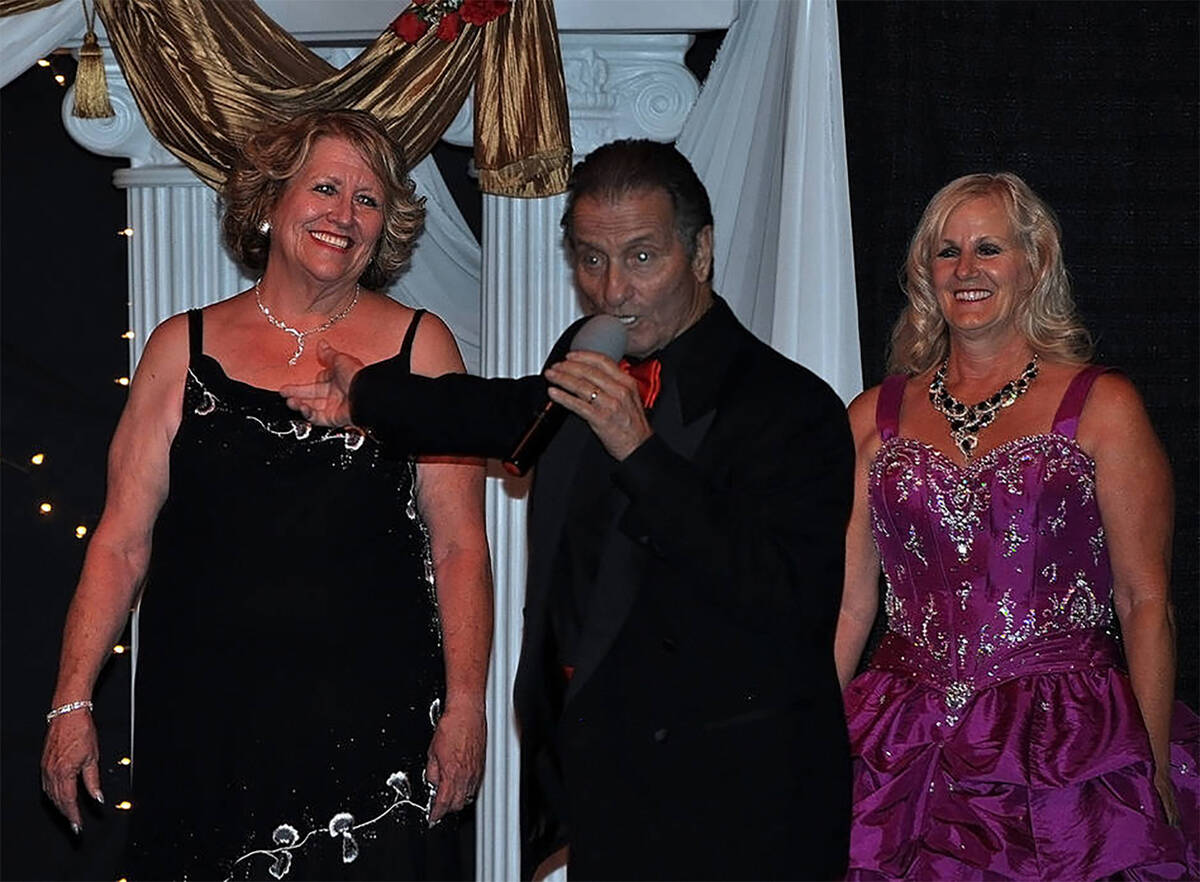 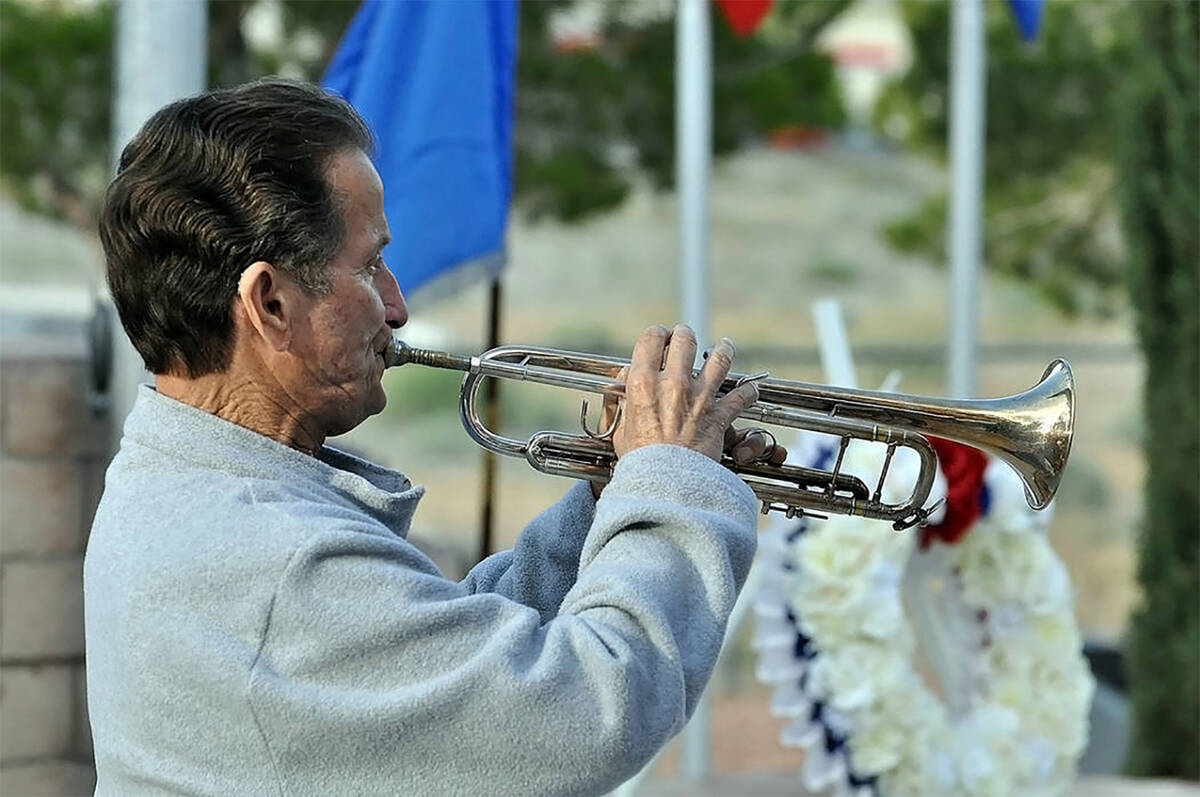 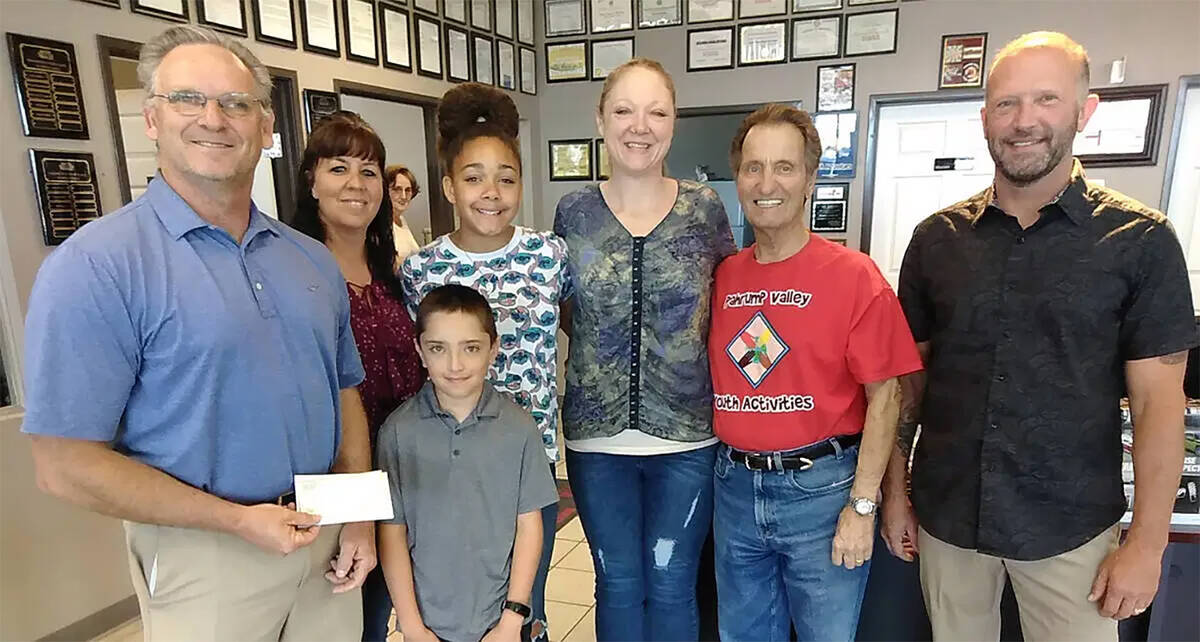 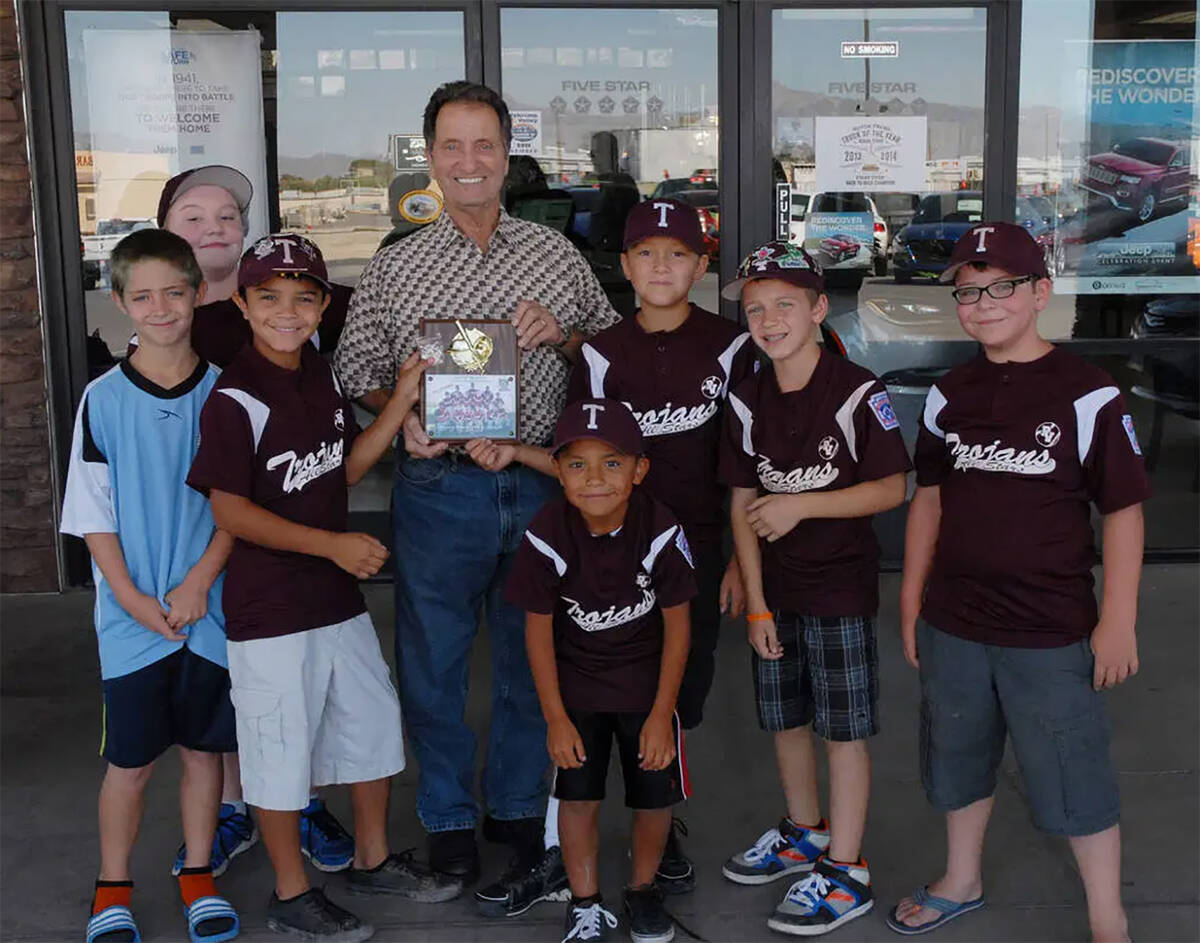 Horace Langford Jr./Pahrump Valley Times In appreciation for his philanthropic deeds in the community, a plaque of appreciation and pin was presented to Tom Saitta several years back.

A longtime Pahrump resident and charitable businessman has died.

Business partner Don Trudeau spoke about his time working alongside Saitta in the car dealership business for more than three decades.

“It’s almost unimaginable not to have him around because we’ve worked together for over 30 years,” Trudeau said. “We all knew he was sick, but we thought we had more years with him. I met Tom in 1990 when I applied for a job at what was his first dealership, which was Chrysler Plymouth on South Decatur in Las Vegas, which he was the owner of. Other than his wife Alice, I don’t think there’s a lot of people who knew Tom as well as I did.”

Trudeau also said that Saitta’s first experience in the car business began when he was 21 years old.

“After he got out of the Air Force, he got a job washing cars at a dealership in Clearwater, Florida because he wanted to be a salesman,” Trudeau said. “He was so persistent that he got the job, and his boss told him to wear a suit and tie. Tom told him that he didn’t have a suit and tie, so the guy gave him $100, and said go get some clothes, so that was Tom’s beginning in the car business.”

After becoming a bonafide car salesman for several years, Trudeau said Saitta eventually decided to pursue other interests in the area of music, as Saitta was an accomplished musician.

“At some point, he went on the road as an entertainer where he had a 12-piece band and he did that for a few years,” Trudeau recalled. “He eventually ended up back in the car business in Las Vegas, where he sold cars for Fletcher Jones Chevrolet and learned the Fletcher Jones method of selling cars back in the late 1970’s.”

Throughout the years, Saitta moved on to other dealerships but Trudeau said it was at the Fletcher Jones dealership where he made a huge name for himself.

“It was the most successful store in Las Vegas and a lot of really successful car guys came out of that, but Tom was the No. 1 salesman every year he was there and when you were the top salesman, they would put a pennant on the wall with your name on it,” Trudeau said. “The years Tom was there, his name remained on the wall as long as the store was there, and every year, he was the top salesman.”

In the late 1980’s, Saitta sought to purchase his own dealership, but could not come up with the cash, thus he decided to try and become a partner at the Las Vegas Chrysler Plymouth dealership, but the group could not agree on a dollar figure.

Moving the goalposts on Tom

“It was Tom and two other guys, and they told him that he could just buy them out and they gave him a number,” Trudeau said. “Tom told them that he would try to get a loan, and a year later he went back to them but then they told him that the store was doing so good, the price had gone higher, so he just went back to work. In 1989, Tom was ready to make the deal, but they told him again that the price had gone higher. The success of the store was all because of Tom. He would work 16 to 17 hours a day and he was the most positive and driven guy you’ll ever meet. I don’t know anybody who had his energy.”

As a person who Trudeau described as tough, persistent, and unshakeable, Saitta made another effort to secure a loan by flying to Detroit without an appointment to meet with an official from Chrysler Capital, a company that finances car dealerships.

The trip came about due to the fact that Saitta didn’t have collateral to secure a loan to purchase his own dealership after making several unsuccessful attempts to get a loan from banks in Las Vegas.

By 1990, Trudeau had known Saitta for a few years and spoke about the meeting Saitta eventually landed with the Chrysler Capital finance official where he was again told he could not get a loan due to lack of collateral.

“Tom then jumped on his desk and pointed at the guy and said, I’m your f**ing collateral,” Trudeau recalled. “The guy ended up giving Tom the loan, so that’s how Tom got to own his first dealership.”

The jubilation of Saitta purchasing his first dealership, however, was short-lived, Trudeau noted.

“A few months later, the first Gulf War started and people stopped buying cars,” he said. “So all of a sudden, Tom’s got this multi-million dollar loan and nobody’s buying cars. Unfortunately, that doesn’t change the fact that he’s got loan payments to make. Tom busted his butt and a few months later when things got better, he worked his way through all of that. He actually ended up paying off that loan in less than half the time of the term that he agreed to because he did such a good job of running that store.”

After several years of other very successful business ventures, all the while, helping various charitable organizations in Las Vegas, Saitta ended up opening the Saitta Trudeau Chrysler, Jeep, Dodge Ram dealership with Trudeau in Pahrump, where his community charitable contributions continued as the business thrived.

One of the many agencies Saitta supported was the Pahrump Valley Youth Activities summer program, not long after the Pahrump Boys and Girls Club ceased operations in 2010.

“There were a lot of people involved in that, but when Tom got involved, he made a commitment of $10,000 a year to that organization and did other things for them as well, and that’s just one of the organizations Tom helped that nobody knows about.”

Aside from organizations, Trudeau said Saitta also had a soft spot for people in need.

Trudeau spoke about a former bandmate of Saitta’s named Larry Haywood, who was suffering from health issues and needed expensive medical treatments.

Both had not spoken to each other for many years until Haywood’s wife called Saitta out of the blue and told him her husband had throat cancer and she didn’t know how long he had to live.

The fact that Haywood did not have health insurance at the time meant the $100,000 medical procedures could not be paid.

“Tom didn’t have the money just sitting around, but he got the money together and paid for the operation, which saved Larry’s life,” Trudeau said. “That’s the Tom Saitta that not a lot of people know about. There was no GoFundMe back then. Tom was the GoFundMe because he did the whole thing on his own shoulders.”

Trudeau also spoke of another instance where Saitta befriended a young admirer who came to know him by seeing his dealership ads on television.

“One day Tom gets a call from a black young man who told him that he wanted to sell cars for Tom one day,” Trudeau recalled. “He just took this kid under his wing like he was his own son and when he turned 16, Tom gave him a job. When he graduated from high school, he wanted to go to college because he was a smart kid, but he didn’t have the tuition. Tom actually paid for his tuition and put him through UNLV. I saw him last Friday when he came to visit with Alice and he is part of that family to this day. Tom considered him like a son and he called Tom “Pops.” Whenever Tom introduced him to someone, he would say, “this is my son.”

“Tom was with me at the time I met my wife when I was a young salesman,” he said. “He treated my children like his children and he was like a grandfather to them. If there was a time that I needed anything, I promise you that Tom would have been there for me or any member of my family. He knew my mom and dad and my siblings. Every family has tragedies and if my family had a tragedy, I’m telling you, Tom would feel it as much as me. He was a great man and his passing is a great loss for this community.”

As of Thursday, Sept. 9, there have been no announcements regarding a public memorial service for Saitta.