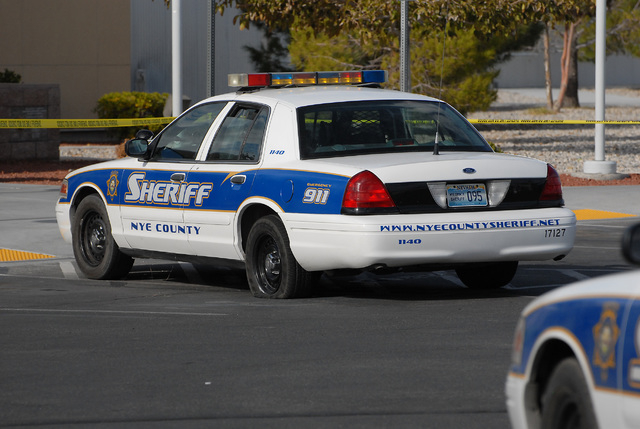 Local police officers are being commended for showing restraint in a recent confrontation with a local man that could have ended with very different results.

Pahrump resident Charles David Plinske was arrested in front of the Nye County courthouse on Saturday after wrestling with a police officer, stealing a sheriff’s car and taunting officers to shoot him.

Nye County Sheriff Tony DeMeo commended his deputies for showing “great restraint” while attempting to get the suspect to comply with their commands.

“All of the deputies are trained to recognize what kind of force is appropriate for the situation,” he said. “When the deputy noticed the suspect didn’t have a weapon in his hand, the deputy transitioned from using her service firearm to pepper spray. I am very proud of the men and women of the Nye County Sheriff’s Office.”

The incident started around 1 p.m. when Plinske was caught on radar traveling 92 mph in front of the Saddle West Hotel and Casino on Highway 160, a 35 mph posted zone.

According to the arrest report, Plinske waved at the police officer as the two passed traveling in opposite directions. After making a u-turn, the police officer witnessed the suspect drive through the red light at State Route 372. Eventually yielding to police lights while driving the center turn lane, Plinske pulled over on Highway 160 near Basin Avenue.

According to the arrest report, Plinske emerged from his black SUV and started moving towards two sheriff’s deputies refusing their commands.

“The suspect told both deputies several times to shoot him…” the report said. After being tased to no apparent affect, Plinske jumped into one of the deputy’s vehicles and drove away.

DeMeo said Plinske was combative with the officers before commandeering the deputy’s marked vehicle and sped to the courthouse.

DeMeo said his office will conduct a full investigation to determine how Plinske was able to jump into a sheriff’s deputy vehicle and drive off. He noted that every car in the fleet should have a mechanism to prevent such an action.

“Every one of our vehicles has an anti-theft device,” DeMeo said. “We are going to determine why the device did not activate. I need to look at this vehicle to see if in fact it does have the anti-theft device or if it was somehow overlooked.”

The deputy who initiated the traffic stop used the suspect’s vehicle to chase down Plinske driving the deputy’s vehicle, according to DeMeo.

“The individual then got into a marked unit where a brief pursuit ensued,” DeMeo said. “The pursuit terminated at the courthouse and the individual was placed under arrest after a struggle. The officer made the right decision to jump in the suspect’s vehicle and follow him to the courthouse.”

Plinske led police to the Ian Deutch Justice Complex, 1520 E. Basin Ave., where several people were in the parking lot due to the first day of early voting.

Plinske immediately exited the police car, and began “coming toward” a deputy and “again refused commands,” according to the report. Plinske was pepper-sprayed, then wrestled to the ground by where the officer and “concerned citizens” were able to subdue the suspect.

It remains unclear why the suspect chose to lead deputies to the courthouse on Saturday, which, by chance happened to be the first day of early voting.

Several booths of area candidates were staffed by volunteers who were eyewitnesses to the conclusion of the chase.

Local resident Marjory Hanson watched the situation unfold just a few steps away from her booth.

Hanson said she was shocked to see what occurred after knowing Plinske for roughly 15 years.

She also said her friend is no stranger to Nye County’s criminal justice system, as evidenced by his behavior at a recent candidates’ night.

Plinske was asked to leave the proceedings following more than one outburst about the sheriff’s office.

“He a very sweet, very intelligent, gentle, kind, humorous man,” Hanson said. “What I saw, was not the David that I know. At the candidate’s night event, he was very upset about his past treatment from the sheriff’s office.”

A far as what may have motivated Plinske’s actions, Hanson said she did not know what set him off.

“I was telling him to stop. He saw me, and everyone, but his focus was on the deputy with the gun drawn,” she said. “It made me sad and it scared me because I’ve never seen this side of him.”

Cles Saunders, who was manning a booth for a candidate he’s supporting, also witnessed the conclusion of Saturday’s brief pursuit.

He said the actions of deputies at the scene were commendable.

“To tell you the truth, I really thought they were going to shoot this man,” Saunders said. “He charged at them after getting out of the deputy’s car, but they really showed their professionalism and restraint. That guy is very lucky to be alive.”

DeMeo said deputies are familiar with Plinske, from recent past encounters.

“We’ve had contact with this individual during traffic stops multiple times where he showed a level of threat against deputies,” DeMeo said. “He’s been known to act in a state that would be called irrational, and that was the state he displayed during this incident, which led to his arrest.”

Plinske was released Monday after posting a $20,000 bond. He faces numerous felony charges including grand larceny auto, possession of a stolen vehicle, intimidating a police officer and battery on a police officer.

His next court appearance is scheduled for Dec. 23.