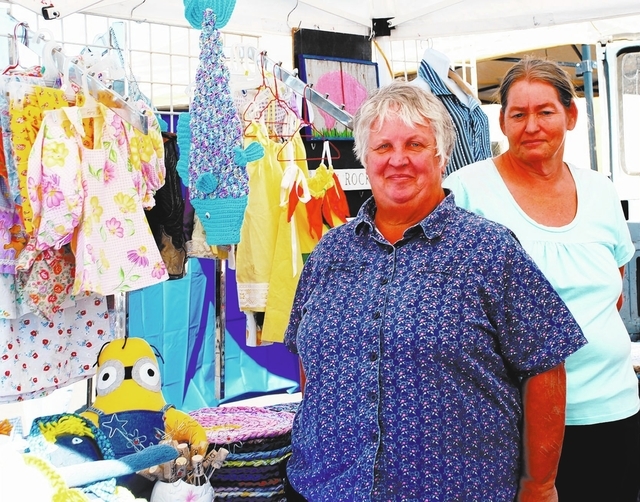 Even in a down economy, two local women have found hard work and a love for what they do means they can still build a small but successful business in rural America.

Bobbi Glover and Candice “Candy” Carlson have been making “something out of nothing” for as long as they can remember. The two women make crafts from recycled materials.

“Both of us have been crafting for decades starting with gifts for family and friends, then moving into hobby businesses,” said Glover who owned and operated an art gallery in Idyllwild, Calif.

After seeing each other at local craft fairs and events, they began talking about their work and it became clear that if they pooled resources, they could save on gas, advertising, event fees and other peripherals associated with making it in the small business world.

The two joined forces in September 2012. They started “Re-Used, Recycled and Re-Loved” this year. “We’re on the same wave length,” said Carlson. “We are sometimes thinking of the same kinds of projects. We talk through the processes, then go out and find materials (from yard sales to remnants), then cooperate to make it happen.”

“This kind of work used to be easier when a person could pick from the city dump or dumpsters but, it’s not legal to do that anymore in most places,” said Carlson. “It used to be anyone could find a door, or a cabinet or yards of material that could be laundered and cut and sewn into something wonderful, but a person has to work a lot harder now to find those things.”

Both moved from other places to Pahrump in the last few years and make their home here. It is a traveling business but Glover and Carlson are usually set up at the Saturday Farmer’s Market. They also show at the Nugget, fairs and events in the county and are often found at “First Friday, on Green Street in Las Vegas once a month.

“Starting a new business is a lot easier when you love what you’re doing,” said Glover. Carlson, readily agrees, adding, “… and finding people to work with who are good at and also love what they’re doing, can mean a lot more fun and a lot more success.”

She smiles as she muses over not having to buy materials other than thread and needles anymore. “Everything is recycled,” she said.

She bought a commercial embroidery machine and now makes T-shirts and regular shirts for horse people, a special piece of clothing on request for people who can’t find a “house dress’” or “favorite pair of slacks.”

“People tell me what they want and I find a pattern and make it for them,” she said.

Carlson has another part-time job driving a school bus for the Nye County School District. She loves it but said, “You have to wait for someone to retire to get on full-time.”

Her specialty is crocheted rugs which she said “do very well in this area.” She also makes purses, stuffed animals for kids and builds furniture pieces including coffee and end tables, and is working on colored glass tables. She, too sells her wares at the fall shows and events.