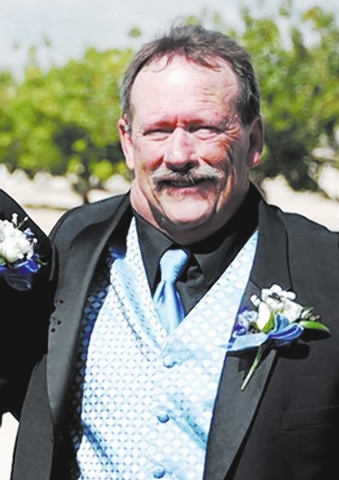 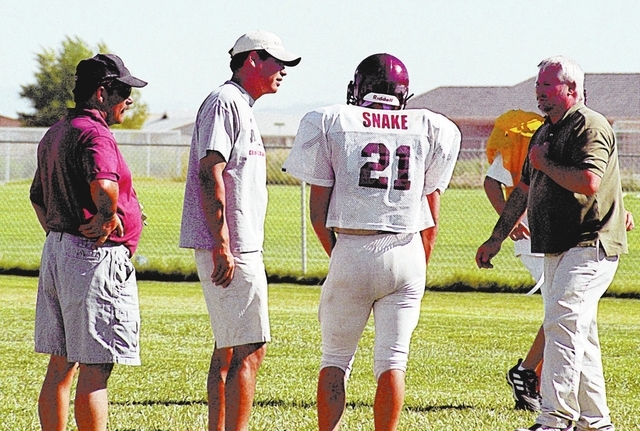 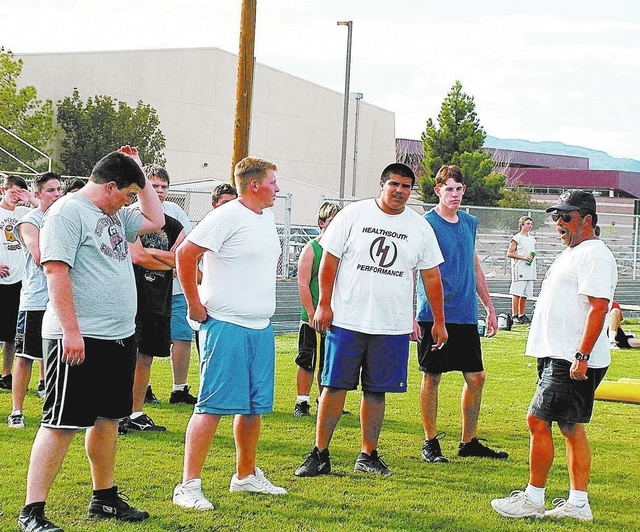 Pahrump Valley High School students and staff are mourning the loss of one of their own. Math teacher Steve Craighead passed away last Wednesday evening at home from a heart attack.

Craighead has taught at the high school since 1997. He is survived by his wife Diane and son AJ.

In addition to being a teacher, Craighead was also an army veteran, who served during the Vietnam War. He was 59 years old.

Room 7 was his classroom and it served as a temporary memorial for those grieving their teacher and colleague. Students and teachers left pictures, flowers and notes to the beloved educator. All the flowers were given to the family and the notes will be at a memorial service planned for 3 p.m. on Friday in the school gym.

According to retired teacher Rod Poteete, Craighead was a sports lover, specifically a die-hard St. Louis Rams and Notre Dame fan, who loved all sports. He also loved coaching. Poteete said his friend had a good head for football and baseball.

“He was the head baseball coach a couple of years. He was a really good baseball man. He was very personable. We loved to talk sports and he was very friendly with people. He was just a really good guy and this is really shocking to me,” Poteete said.

The retired teacher also liked the way Craighead handled the tougher kids in class. “He was a good math teacher. Math is a tough subject to teach because most kids could care less. He handled some tough kids. I saw him teach his math classes, and he had some kids in there that were just a pain in the ass. Even these kids loved him,” he said.

“We were both assistants and he came from Cheyenne and was a defensive coordinator. He coached at Rancho, Mojave and Cheyenne. He was known for preaching a hard-nosed style of football. You could not find a guy that loved football better than him. He was just a great guy and always in a good mood. He said this was going to be his last year. I remember talking to him yesterday after school. There really was no indication he was sick. We were just joking around and that was the last time I saw him,” Nygaard said.

Trojans wrestling Coach Craig Rieger said this about Craighead, “He was just always involved with our student athletes. He was an athlete himself and a good friend so it is tough to see him go.”

Fellow coach and good friend Bob Bruce said the teacher’s passing will leave a huge void in his life.

“Steve was a family man and he was a great friend to many. He loved sports, specifically football, baseball, and hockey. I knew him for 11 years. He was a great teacher and coach; he influenced more lives than he knew. I considered him my best friend for a long time. I will miss him greatly. His sense of humor was apparent in his teaching and his students loved him. One of his greatest legacies was his ability to help a high percentage of his math proficiency students pass the state test. He will be missed by many and there will be a huge void in our high school staff,” Bruce said.

“Steve was a great guy, a wonderful coach and teacher, a devoted family man, and a coach in every molecule of his body. I do not know what to say except that I miss him very much,” he said.

A former student of Craighead’s, Ashley Brickles, agreed that Craighead was a great teacher. She said as much in a note to him after learning of his passing.

“The best teachers teach from the heart, not from the book … This is exactly what you did, you have touched the hearts of so many students in my class of ‘09. I know you have done the same for others before and after you came into our lives, not only as a teacher but as a friend. You were someone who always gave great advice. You were the first to call me ‘Brickles’ in my freshman year and for some odd reason people I have worked with, that is what they call me by today. I was and still am blessed that you were my algebra teacher for both my freshman and junior year. You are the only reason I understand and enjoy algebra. Thank you. Mr. Craighead, you will be missed and never forgotten. You were and still are the best. May you Rest in Peace. We will all see you up there soon.”

For more information about arrangements for Craighead, call Pahrump Valley High School for more details at 775-727-7737.