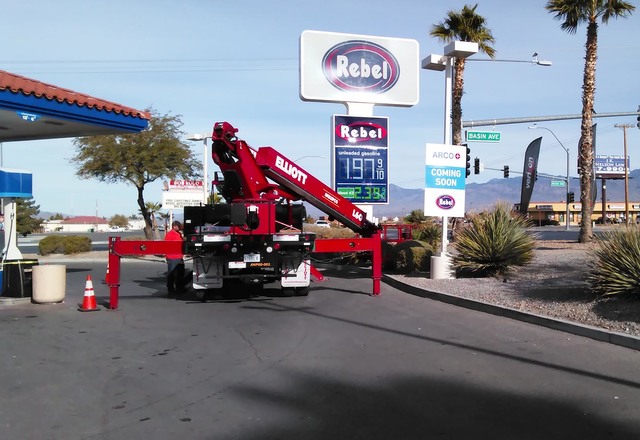 It took crews roughly one day to complete the changeover from Rebel Oil to ARCO at Highway 160 and Basin Avenue location. Officials cite better name recognition for travelers as the ARCO brand is known nationally. The valley’s other Rebel store at Highways 372 and 160 will remain the same. Selwyn Harris/Pahrump Valley Times

A brand new look arrived this month for a longtime Pahrump business.

Manager Terry Nespor said name recognition was the main reason for the changeover, which has been in the works since Jan 27 of this year.

“The change is because we always wanted to go to a top-tier gasoline and of course, that’s what ARCO is,” he said. “Another element is the fact that we now have nationwide exposure. In other words, if somebody is visiting here from New Jersey, they know the ARCO name, but they may not know the Rebel name.”

As one of two original Rebel stores in the community, Nespor said the Rebel station at Highway 160 and 372 will not take on the ARCO brand, but other stores in the state eventually will.

“In Nevada, the change will occur to some of the Rebel stations but not all of them,” he said. “The process has been going on for quite some time with the other stores, but with our particular location, it all happened last week. We had to partially shut down for a couple of hours when we began the changeover because we had to upgrade all of the software.”

As a result, Nespor said his regular customers have taken everything in stride as the physical transformation began taking place this month as workers began installing the ARCO brand at the location.

“Customers are favorable on it because again, the people that are from out of the area, know the ARCO brand and the people who are here in town that commute to Vegas, are also familiar with ARCO. For some of the folks here in Pahrump who don’t go into Vegas, it will be a learning experience for them.”

Additionally, Nespor said his employees are working hard to inform area customers of what will be different with the business along with the new moniker.

“As far as the brand new card readers on the pumps, right now, we are not able to accept credit on fuel sales,” he said. “I can tell you that there is now a $0.35 fee now but people have to keep in mind that the price they see displayed is the cash price,” he said.

As part of the changeover, Nespor said a new high-tech marquee will now greet customers from the highway.

“We’ve installed new digital signs which display the price per gallon and people can see it from much further away,” he said. “It also allows us to change the price of gasoline much faster.”

ARCO was once known as the Atlantic Richfield Company.