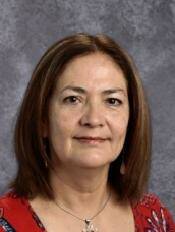 Anyone in academia knows that for a school to function properly, it needs a great principal’s secretary. They keep things afloat, orchestrating pretty much everything behind the scenes.

It’s not an easy job, and certainly isn’t for everyone. It’s a position where continuity matters in a position of such high transiency.

That’s why it will be a major blow for Pahrump Valley High School after they lose 31-year veteran Margarita Veloz Villa to retirement this May.

Margarita (a graduate of the old high school) has been at the new high school since its opening in August 1991. She has seen the community change quite a bit since then.

“When I first started with the school, we grew in attendance by over a 1,000 students, and added a bunch of new staff members, too. The school went through a remodeling process because we grew so much,” said Villa.

Margarita held numerous roles while at PVHS, some of which included coaching volleyball, basketball, and softball.

“Some of my proudest accomplishments were coaching with Bob Hopkins and Rich Lauver and getting four state championships in basketball and softball,” said Villa.

In her three-plus decades at the same school, Margarita proved to be the school’s matriarch of sorts.

But things didn’t always come so easily for Margarita on the job. Covid proved a bigger challenge than expected, for instance.

The principal’s secretary essentially has the keys to the car and their role involves filling in staff shortages, among many other things. At PVHS there is a lot of staff. Nearly 120 in all.

“Just trying to get all the classes covered with staff members missing school because of Covid was, by far, the hardest part of my 31 years in the district,” said Villa.

Things aren’t exactly back to normal, either, as staff shortages still plague much of the nation, including Nye County.

According to Villa, the school could use a little more help in the front office as well. But she is confident with the staff that’s in place.

Margarita’s mantra has been to work hard and be rewarded. It’s what got her through 31 years at the high school (and the previous eight years at Valley Bank) at such a high level.

And now with retirement on the horizon, her post-career plans will be just as simple as her mantra.

“I plan on traveling, enjoying the grandkids, and having more ‘me’ time,” said Villa.

As for advice for her replacement: “good luck,” she said.