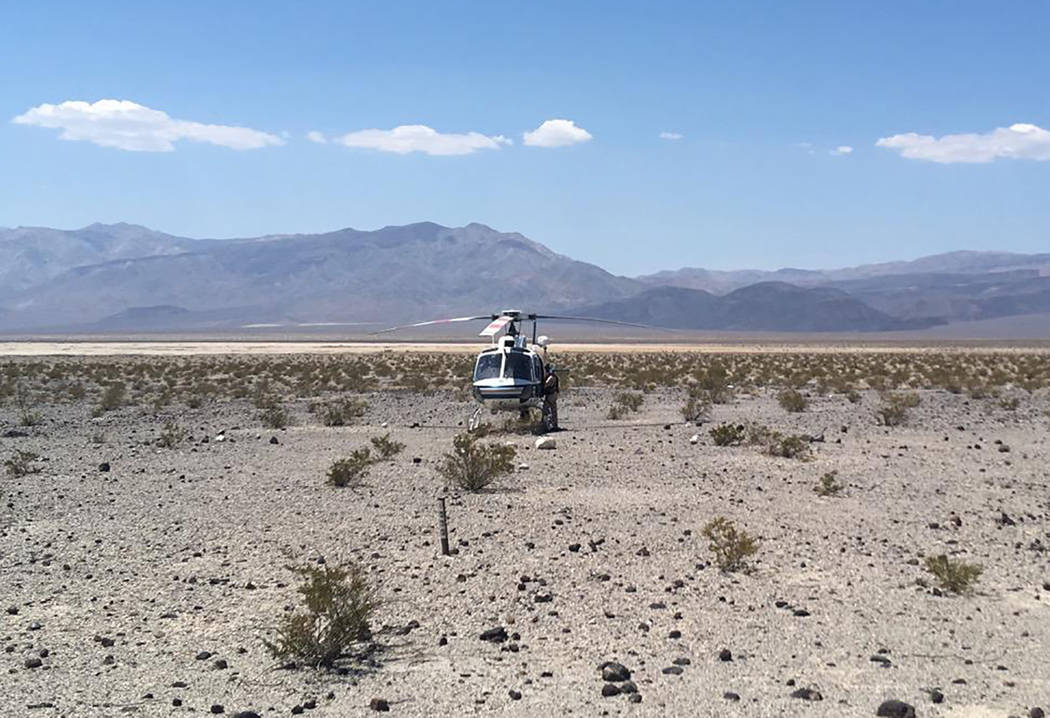 Special to the Pahrump Valley Times An aerial search was needed to locate Huntington Beach, California resident Peter Rhoad, 57, who died after falling during a hike near Panamint Butte in Death Valley National Park. Rhoad's body was located July 17, by Inyo County Sheriff's Office Search and Rescue Crews, with the assistance of a California Highway Patrol helicopter. Authorities said Rhoad's suffered a fracture skull as a result of the fall.

A California man is dead after suffering a fall during a hike near Panamint Butte in Death Valley National Park.

The man, identified as Peter Rhoad, 57, from Huntington Beach, California, was reported overdue returning from the hike on Monday, July 16, by his fiancee, National Park Service Public Information Officer Abby Wines said in a news release.

The following day at 9 a.m., Inyo County Sheriff’s Search and Rescue crews, along with a California Highway Patrol helicopter, began an aerial search and rescue assignment where crews first spotted Rhoad’s backpack and empty water bottles, along with printed information about hiking the area, not far from Rhoad’s vehicle.

His body, Wines said, was eventually located at noon about 2,500 feet from his backpack.

The exact location was about 1 mile east of Rhoad’s vehicle on the slopes of Panamint Butte.

His body, Wines said, was transported by helicopter to Lone Pine, California, roughly 50 miles from the site.

She also noted that the Inyo County Deputy Coroner conducted an autopsy on July 19, where it was determined the cause of death was a skull fracture due to the fall, which was compounded by exposure to the elements.

“The autopsy showed that his injuries and the elements resulted in his unfortunate death,” she said. “It was a combination of the two. It wasn’t particularly steep terrain and we don’t know exactly where he fell because he was not at the same spot. He obviously moved after he fell since his backpack was somewhere else. It wasn’t like he fell off a cliff.”

Additionally, Wines provided advice for those who are interested in hiking the area, located more than 80 miles west of Pahrump.

“We want to stress the importance of planning ahead and being prepared if you plan on hiking in the park,” she said. “There is no cellphone service throughout much of the park. If you’re going to be out venturing alone or in a really remote place, it’s always a good idea to tell a friend or relative what your exact plans are and have a specific agreed-upon time that you plan to be back into cellphone service and able to check in with them.”

Additionally, Wines said many heat-related accidents do not occur during the hottest time of the year.

“It’s usually May or September when it’s hot, but not incredibly hot,” she said. “That’s when people get lulled into thinking that it’s cooler than it actually is. Most people who are not from around here do not realize how hot it is as well as the importance of drinking water. In general, this sort of tragedy happens maybe every other year on average, I would guess.”