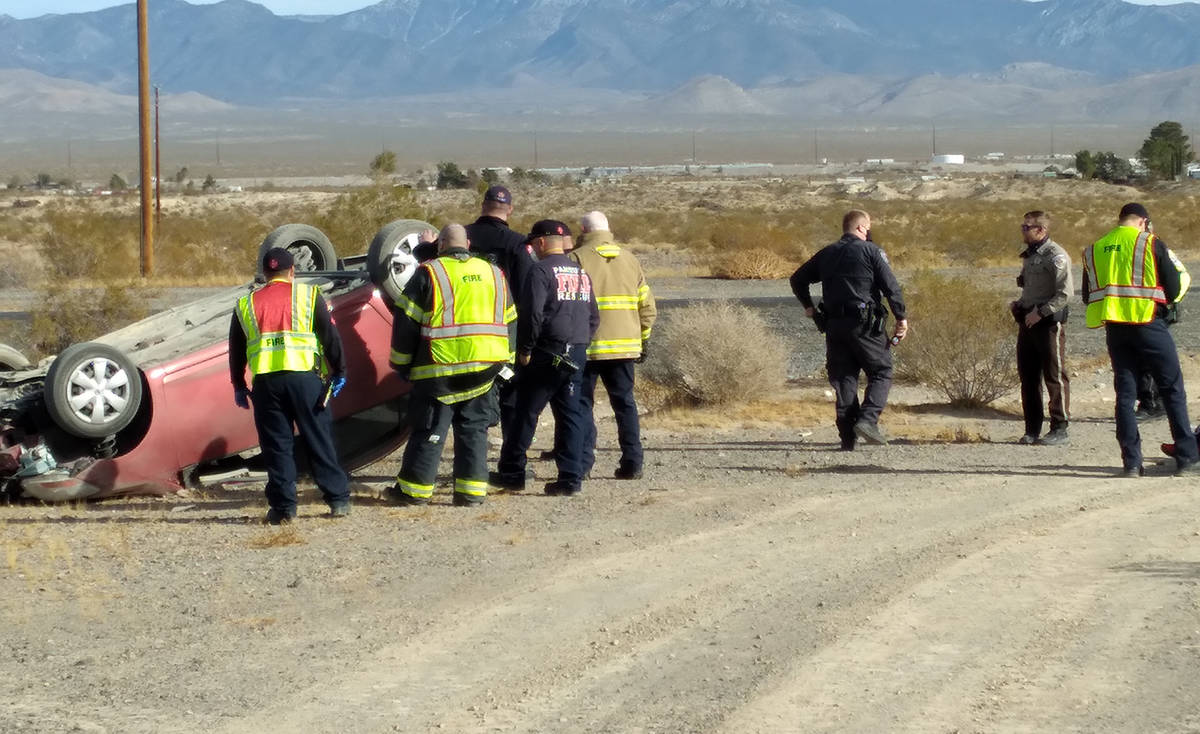 Selwyn Harris/Pahrump Valley Times Highway 160, north of Mesquite Avenue was the scene of a single-vehicle rollover crash just before 1 p.m. on Wednesday, Jan. 13. The driver and sole occupant of the vehicle declined medical transport to the hospital. The cause of the crash is under investigation by NHP.

Pahrump Valley Fire and Rescue Service crews responded to the scene where the driver of a silver SUV reportedly went into oncoming traffic and struck another vehicle.

The male driver of the SUV was said to be unresponsive as medics began performing CPR.

He did not survive the crash.

The occupant of the second vehicle declined medical transport.

The Nevada Highway Patrol is investigating the exact cause of the collision.

Pahrump Valley Fire and Rescue Services Chief Scott Lewis said crews arrived on scene to find the sole occupant had self-extricated from the vehicle, which was resting on its roof.

The driver of the maroon sedan, who appeared to be a juvenile, was alert and conscious upon the arrival of first responders.

“Witnesses described the vehicle had left the roadway and rotated several times before coming to a rest,” Lewis said.

Following an assessment of the driver’s condition by Pahrump EMTs, the driver declined medical transport to Desert View Hospital.

NHP is investigating the exact cause of the crash.

On Saturday, Jan. 9, Pahrump fire crews were dispatched to a mutual aid assignment for a fully-involved structure fire in the Trout Canyon area, at approximately 5:30 p.m.

“The first units arrived to find a fully-involved, multi-story dwelling with immediate structure exposures,” Lewis said. “Crews commenced a defensive exterior attack and quickly controlled the fire from spreading to the other nearby houses. Crews continued to assist Clark County fire crews for approximately four hours. The cause of the fire is under investigation by the Clark County Fire Department. No injuries were reported.”

On Monday, Jan. 4, crews were dispatched for a report of a two-vehicle collision along Highway 372 in the area of Big Five Road, at approximately 5:17 p.m.

Crews arrived on location to find the two-vehicle accident as reported, where the vehicles left the roadway, and careened into a perimeter chain-link fence.

“One vehicle went into an occupied structure and the second vehicle came in close proximity to another structure, however it got caught up in the fence,” Lewis said. “There were at least two injuries, where one person was transported to the local hospital from the scene. The structure was assessed and found to be unsuitable for occupancy. It also appeared to be under renovation at the time of the accident.”

The exact cause of the crash is under investigation by NHP and the Nye County Sheriff’s Office.

On Jan. 2, Pahrump fire crews were dispatched for a report of a vehicle fire in the area of Highway 160 at the Crystal turn-off, at approximately 9 p.m.

“Fire crews arrived to find a fully-involved vehicle off of the roadway,” Lewis said. “There was no one accompanying the vehicle, which was completely consumed. The fire is deemed suspect in nature and an investigation is underway. There were no injuries reported.”