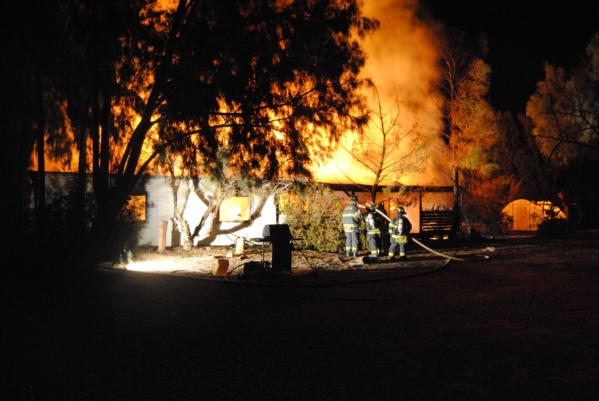 The State Fire Marshal office is investigating a New Year’s Day fire that claimed the life of an elderly Pahrump man.

Emergency crews were summoned to a structure fire along the 1700 block of West Windsong Lane just before 10 p.m., Friday evening.

Pahrump Valley Fire and Rescue Services Chief Scott Lewis said an unidentified elderly man living at the residence called dispatchers to report his home was on fire, but made a fatal error by not following instructions from 911 dispatchers.

“We were notified that the occupant had reported the fire when he was outside the structure,” Lewis said. “He intended to re-enter the structure to save his pets against the dispatcher’s instructions. He discontinued the telephone conversation and could not be recontacted. Upon our arrival, we found very heavy fire conditions.”

Lewis said fire crews then performed a procedure where individuals are deemed in imminent danger in the event of a well-involved structure fire.

“We were preparing for what is known as a ‘blitz attack,’ which means lots of water in a short period of time, assuming that we may have an actual rescue on our hands,” he said. “Due to the heavy fire conditions, the assignment warranted that if there was somebody inside the residence, we would no longer be looking at a rescue, but a recovery. There was fire through the roof and fire throughout the structure. We commenced that blitz attack and upon knocking down the flames we found the roof had collapsed and the floors were compromised.”

Lewis noted crews ‘meticulously’ and ‘cautiously’ searched for the victim under challenging conditions inside the home.

“The conditions that we found made it extremely difficult, but we did eventually locate a person underneath the roof debris,” he said. “We found that obviously the patient did not survive the fire. The patient was recovered and transported to the mortuary.”

According to a neighbor, the home was occupied by Keith McKenney, a man in his early 70s.

Fire crews did locate several animals safe inside an accessory building on the property, but it’s unknown whether they were removed from the burning structure prior to the call to dispatch.

No animals were located inside the burned-out home, following a thorough search.

Additionally, Lewis said the cause of the fire is under investigation through his agency and the state fire marshal’s office.

“The deputy state fire marshal came out the next morning and it’s still early but we believe the fire to be accidental in nature,” he said. “It is undetermined at this point what the ignition source may have been.”

As a result, Lewis said there’s an unfortunate lesson to be learned from the tragedy.

“Our message here is never to re-enter a burning structure,” he said. “The gentleman was clearly in a safe position on the outside of the structure. We located his car keys near his car and it looked like he brought some clothing out on his own and he was totally safe, but at some point, against good judgment and the advice of the dispatchers, he decided to re-enter the structure and obviously came to the point where he could no longer egress.”