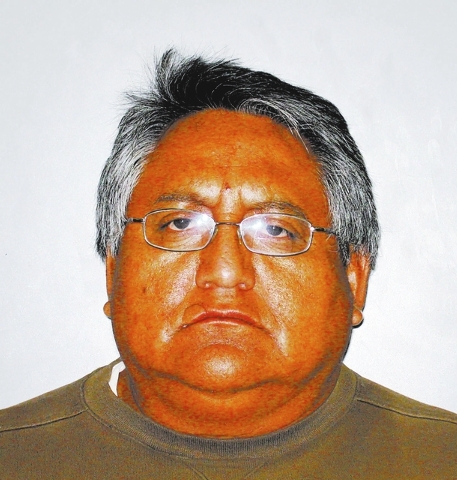 A jury found a man charged in 2011 with sexually assaulting a young girl on multiple occasions not guilty of multiple offenses on Thursday.

Denny Tsosie appeared for a four-day trial in the case beginning Monday on eight category A felony charges, including four counts of sexual assault of a child under the age of 14, three counts of lewdness with a child under the age of 14 and one count of first degree kidnapping with intent to commit sexual assault. All carried a possible life sentence.

Following several hours of deliberations, a 12-person jury ultimately found the man not guilty on all eight counts.

Tsosie was first arrested in the case on May 18, 2011 after the Nye County Sheriff’s Office received a report that a 13-year-old female had been sexually assaulted.

The girl allegedly told police Tsosie had assaulted her twice in the last six days leading up to her report, which the charges said were committed in the man’s home on Kellogg Road. Additionally she is said to have told police about another incident that took place in March 2011, at which time Tsosie was alleged to have driven her out to the desert in his vehicle where he subsequently assaulted her.

In addition to the incidents listed in the eight charges, the girl alleged Tsosie had been assaulting her on a regular basis for approximately eight years from the time she was 5 until the age of 13.

Over the course of the trial, the state presented evidence from the victim as well as detectives who investigated the case and a doctor who examined the girl.

Although none of Tsosie’s DNA was ever found on the victim, the prosecution noted in closing arguments that the medical examiner that looked at the victim noted there was evidence that she had suffered an assault.

“(The doctor) said that this was textbook evidence of sexual abuse. That he rarely sees this. And this is a guy who’s done thousands of these. So we don’t have to take (the victim’s word for it) there is clear-cut, unrefuted, medical evidence,” Vieta-Kabell said. “What we’ve seen and what we’ve heard over the course of this week absolutely proves this defendant is guilty beyond a reasonable doubt. Everyone was here when (the victim) came in and described exactly what happened to her, not only over the course of eight years, but over the middle of March and May 12th and 16th, 2011. She had to sit there and we had to watch as she sniffled her way through describing what happened on May 16, when she was just 13 years old, how she was just standing in the kitchen when this defendant sitting right here came up behind her and reached around and started fondling her breast. She explained to us, as she was sniffling, how after that, he made her go to his bedroom, where he made her lie down on his bed and then sexually penetrated her. And that wasn’t the only time.”

Although the prosecution asserted Tsosie was guilty, the defendant’s attorney, Harry Kuehn, said there was evidence to suggest otherwise.

Kuehn had Tsosie’s wife and two doctors testify that Tsosie suffered from erectile dysfunction, which would have prevented him from sexually abusing the girl. The lawyer pointed out that if jurors believed the victim, she was assaulted more than 1,200 times by the defendant.

“Denny suffers from many physical ailments, which was confirmed by Dr. (Kimberly) Adams…Under oath (Dr. Sheldon Freedman) testified he suffered from impotence of organic origin. If you recall, that’s what he said twice. He read it right off his report,” Kuehn said.

Additionally, the defense attorney added, it should be noted the length of time the young victim said she had been abused changed several times over the course of the investigation.