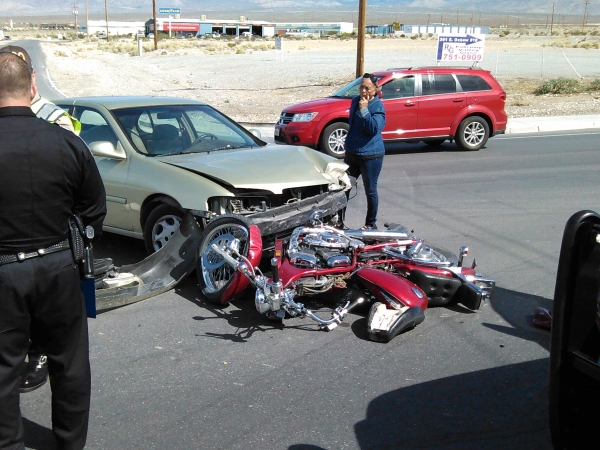 A motorcyclist was airlifted to UMC Trauma with serious injuries after he was struck by a car along Highway 160 and Wilson Road Wednesday afternoon.

Nevada Highway Patrol Trooper Daniel Pineau said the unidentified man was traveling northbound on the highway when the driver of the car was attempting to cross the highway, just after 12 p.m.

“The vehicle was eastbound on Oxbow when the collision occurred,” he said. “We’re not certain of the motorcyclist’s condition right now, but he is in very serious condition. There will be a citation issued as a result of this accident and we’re still conducting the investigation.”

Fire Chief Scott Lewis said crews were dispatched to the scene, which initially was thought to be a single-vehicle collision.

“It was originally dispatched as a motorcycle down, but as we were en route, we were informed that it was actually a two-vehicle accident, involving a motorcycle,” he said. “Upon arrival, we found a rider down on the ground with serious lower extremity injuries. The patient was subsequently taken to Base 21 and flown to trauma.”