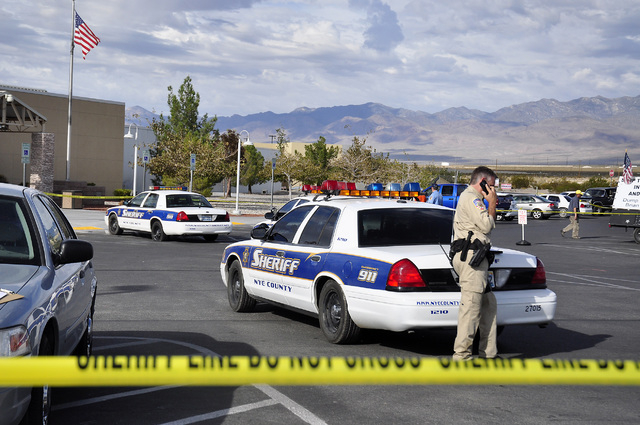 The man who allegedly fought with Nye County Sheriff’s Deputies and led them on a high speed chase in a stolen sheriff’s deputy’s cruiser, didn’t spend much time in jail following the incident this month.

Pahrump resident David Plinske was released on $20,900 bail from the Nye County Detention Center roughly a day and a half after the Oct. 18 incident. The bail was set by Judge Kent Jasperson.

“I do not have any criticism with the amount of the bail,” Kunzi said in an email. “$20,900 is not a small amount for bail, but we had hoped for a higher amount.”

Jasperson said this week that though he has flexibility to set the amount of bail on a suspect, he normally abides by the amount set by the Nye County Detention Center.

“All of the charges are listed on the jail’s booking sheet as well as the bail amount when he was arrested,” Jasperson said. “I always review the booking sheet to see what the charges are and the declaration of arrest, to make sure there was probable cause for his arrest. The bail was already set from the jail and I was in agreement with it and left it where it was.”

Plinske’s troubles began around 1 p.m., on Saturday, Oct. 18 when authorities said he was caught on radar traveling 92 mph on Highway 160, which is a 35 mph posted zone.

After eventually pulling over, Plinske allegedly became combative and charged at the deputies before commandeering the marked sheriff’s office vehicle and reportedly fled to the courthouse where police said he fought with deputies before his arrest.

Jasperson said the true purpose of setting a bail is not punitive but to make sure the individual shows up for court.

“The purpose of bail is not for punishment in any way,” he said. “The purpose of bail is to ensure that someone is going to show up in court. We don’t want to set an extravagant bail amount on somebody. We just want to make sure they will appear in court, because in the eyes of the court everybody is innocent until proven guilty.”

Jasperson added, “In this case I left it where it was. I don’t think he’s a flight risk.”

Jasperson said a review of Plinske’s criminal history was another reason he opted not to override the bail amount.

“I didn’t see a lengthy criminal history in his case,” Jasperson said. “I didn’t see a lot of failure to appears, so I didn’t see a reason to adjust the bail. At this point the district attorney’s office has not filed charges on this case as of yet and the arrest was about a week ago.”

Jasperson also noted that he’s had one previous incidental contact with Plinske before the initial court appearance this month.

“I think the first time I met him, I was on the highway putting up a campaign sign and he stopped and talked for a few minutes,” Jasperson said. “It was a civil conversation. Other than that, I have no idea who he is.”

“Bail is not to be used for punishment and everybody gets confused about that.” DeMeo said. “You can’t use it to punish. We made the arrest and it’s up to the judicial system to do their part of the job. You can’t take these things personally and if you do, you’re going to be very frustrated.”

As an example, the sheriff recalled an instance where two individuals had different bail amounts that seemed to defy logic on the surface.

“I made a marijuana arrest and that person stayed in jail for a couple of weeks,” DeMeo said. “One of our detectives made an arrest on someone charged with 15 burglaries. The guy with the burglary charges was released on his own recognizance, while the person I had for the marijuana charge was still in jail. Welcome to the criminal justice system of the United States.”

Jasperson, meanwhile, said it’s often the circumstances behind the charges that also determines the bail.

“All of that is taken into consideration,” Jasperson said. “What’s listed on the booking sheet, the district attorney may not file all of the charges and I’ve had that happen in the past where I left people in jail for week or ten days on felony charges and the district attorney’s office files a misdemeanor charge or doesn’t file anything at all.”

The judge also commended local deputies on their professionalism and restraint during the entire incident.

“You could probably bet that if he were in Las Vegas, as soon as he got in the deputy’s car, they probably would have shot him and rightfully so because he was fleeing in a police car where there are more weapons,” Jasperson said. “The deputies showed a great deal of restraint and did their job exceptionally well. I don’t really see how it could have been handled better.”

Prior to the conclusion of the high speed chase, witnesses said a deputy shot out the rear driver’s side tire of the marked police unit Plinske commandeered.

The shooting incident was not mentioned in the official arrest report which outlines the details of an incident.

Both DeMeo and Assistant Sheriff Rick Marshall have yet to comment on why the discharging of a deputy’s firearm was not detailed within the report.

His next court appearance is scheduled for Dec. 23.