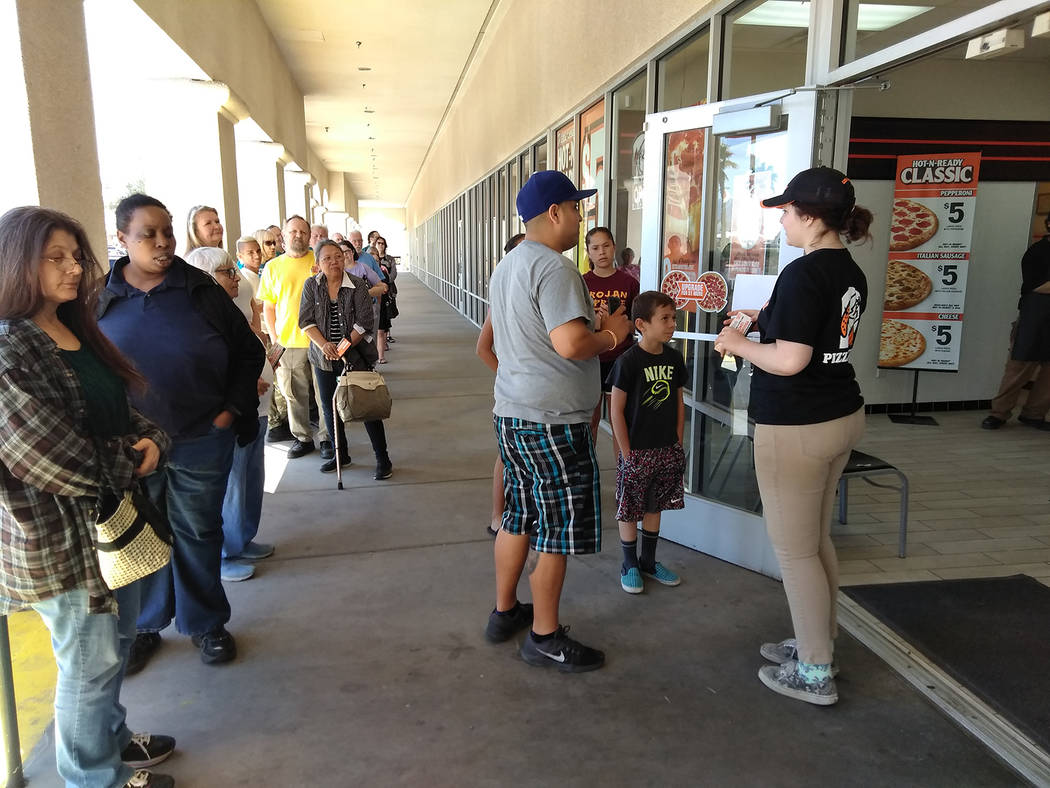 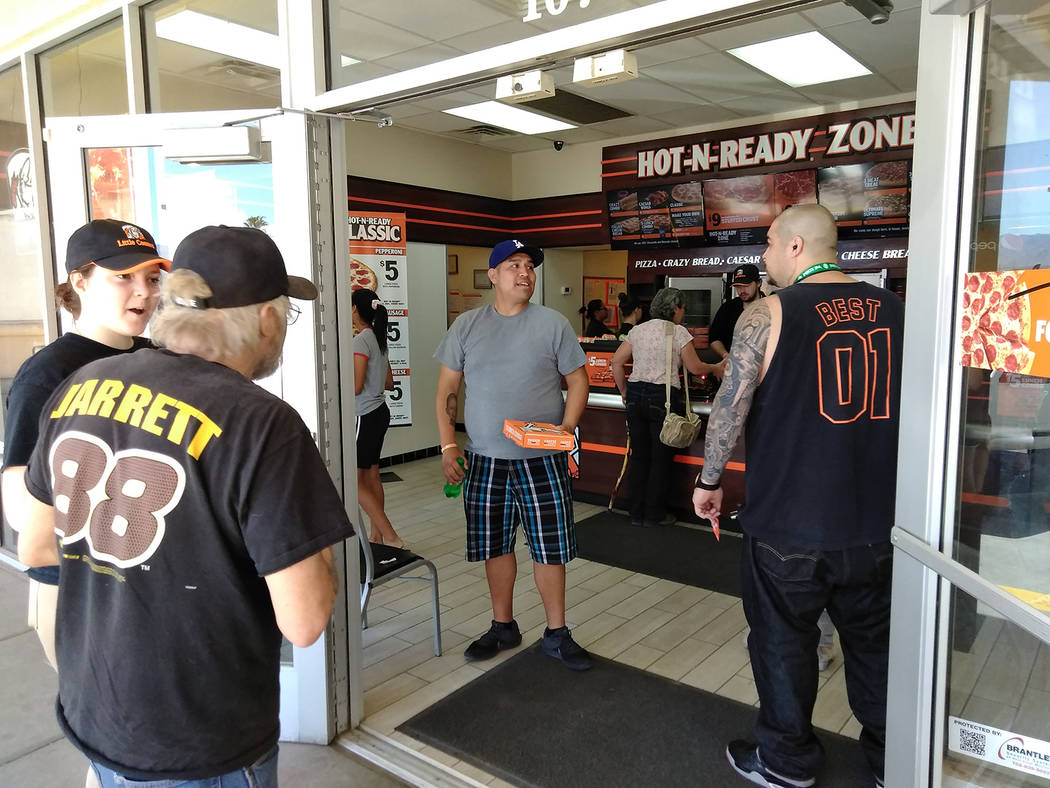 Selwyn Harris/Pahrump Valley times Local resident Brian Silva, center, was one of dozens who enjoyed a free lunch courtesy of Little Caesar's on Monday. Silva actually predicted the winner of the tournament, as he proclaimed the Villanova Wildcats would take the championship over the Michigan Wolverines on Monday evening. The wildcats did just that by defeating Michigan 79-to-62 in the title game. 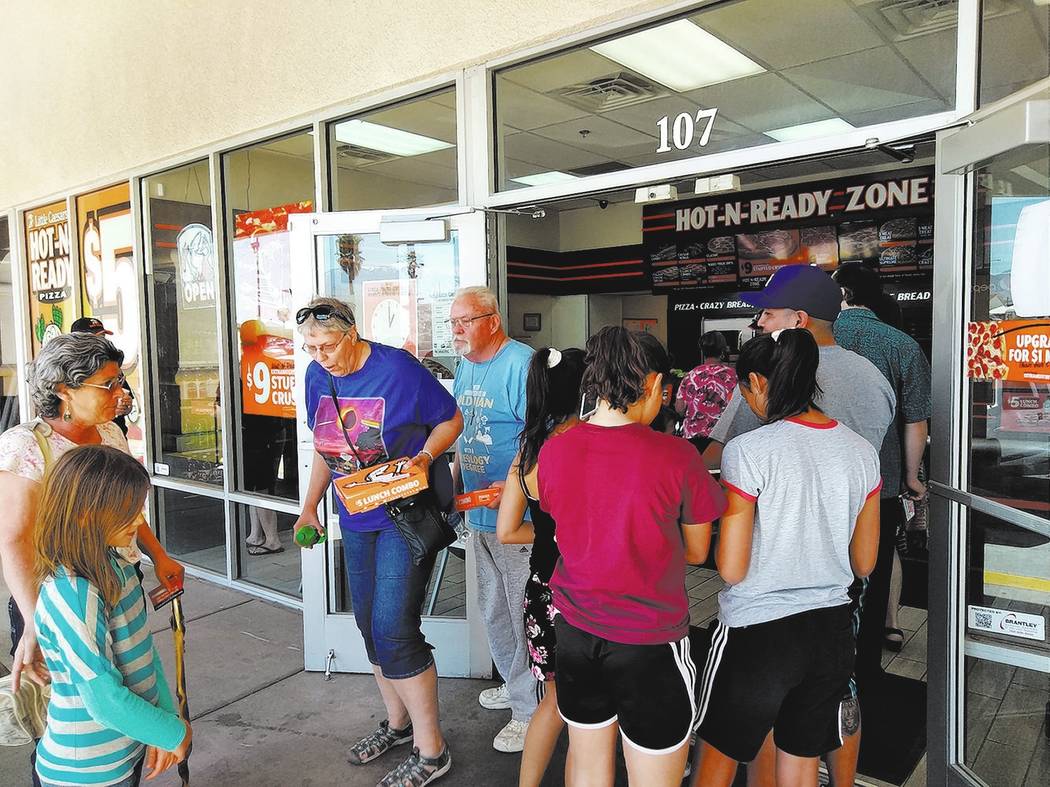 Selwyn Harris/Pahrump Valley Times Management and employees at Pahrump's Little Caesar's Pizza were fully prepared to handle the additional influx of customers seeking the company's offer of free lunch on Monday after losing a bet on the NCAA tournament this year.

Who said there’s no such thing as a free lunch?

Certainly not officials from the Little Caesars Pizza corporation, as the company did just that on Monday by offering a free lunch to all from 11:30 a.m. to 1 p.m, nationwide.

The event came about from a recent NCAA tournament game, where the company promised a free lunch combo to anyone if a 16th-ranked team beat a No. 1 ranked team.

That feat, which had never happened in tournament history, finally occurred on March 16, last month when 16th-ranked University of Maryland, Baltimore County Ramblers (UMBC) pulled off a major upset by beating the University of Virginia Cavaliers, 74-54.

Management and employees at the Pahrump Little Caesars location were fully prepared on Monday, April 2, when a line began to form at the store’s entrance.

Brian Silva is a three-year resident of Pahrump.

Interestingly, Silva, who follows the tournament each year, correctly predicted which team would take home the national title on Monday night.

“I’m here for the free pizza of course,” Silva said exiting the business. “I heard about it yesterday when I was in Vegas and someone told me about it. I think it’s pretty cool. I have been following the NCAA tournament and I’m thinking Villanova is going to take it all. I never thought Chicago, ranked 16th, would beat Virginia, who was that No. 1 ranked team.”

Lawrence said he is a regular customer at Little Caesars.

“We didn’t plan on coming here but a friend of ours told us about the free lunch,” he said. “It was very quick and I can’t believe it, because I come here about three days a week, at the very least. Some lady told me something about Little Caesars losing a bet.”

There were a few stipulations attached to the deal, including just one order per family.

As a side note, Villanova University defeated the University of Michigan during Monday’s championship game, by a score of 79-62. The game was played in San Antonio.