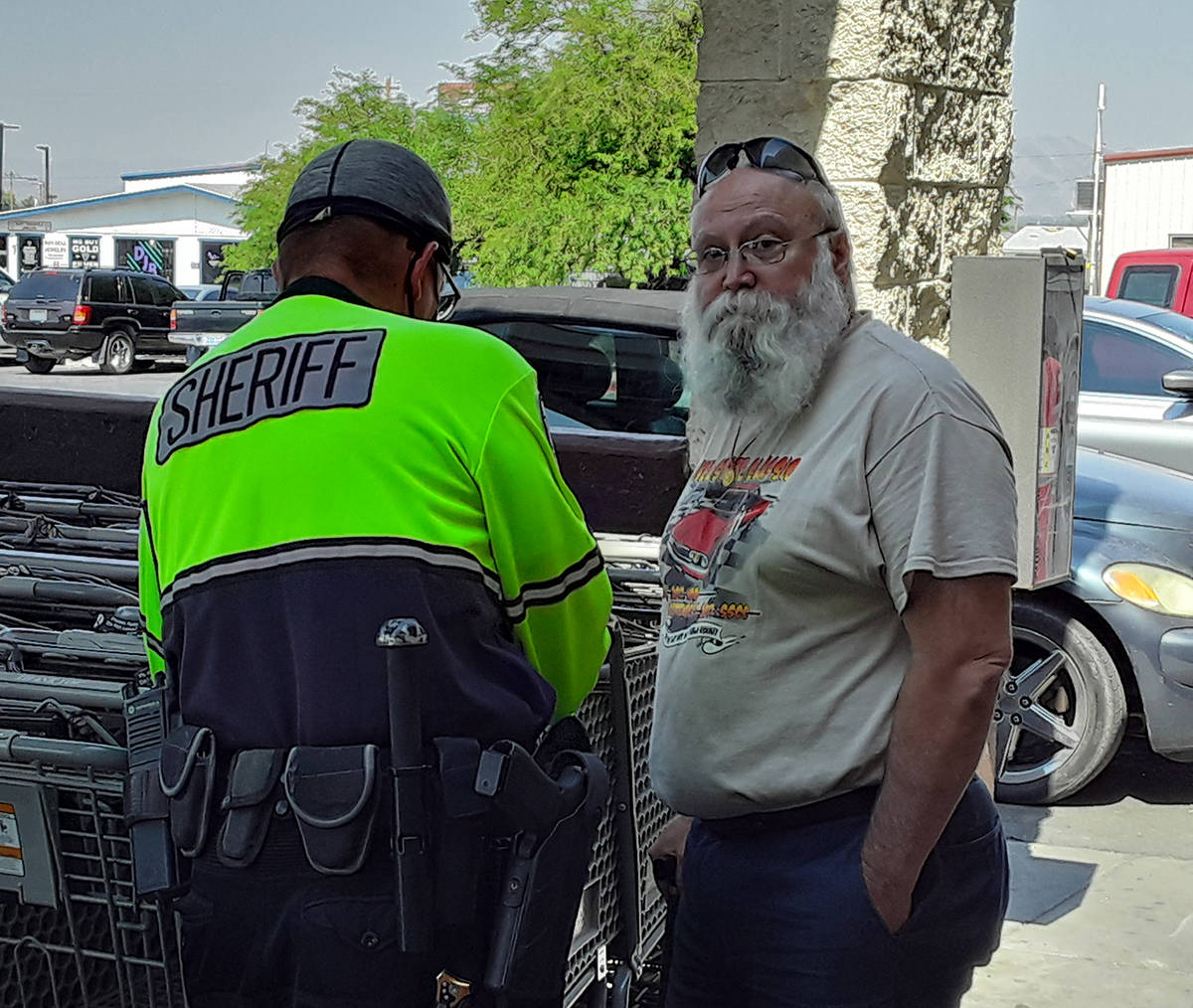 Selwyn Harris/Pahrump Valley Times Nye County Sheriff's Office Deputy Joe McGill successfully de-escalated an incident at Smith's after a man refused to wear a mask upon entering the business, which is against store policy. The man was formally trespassed from the property at the request of management. 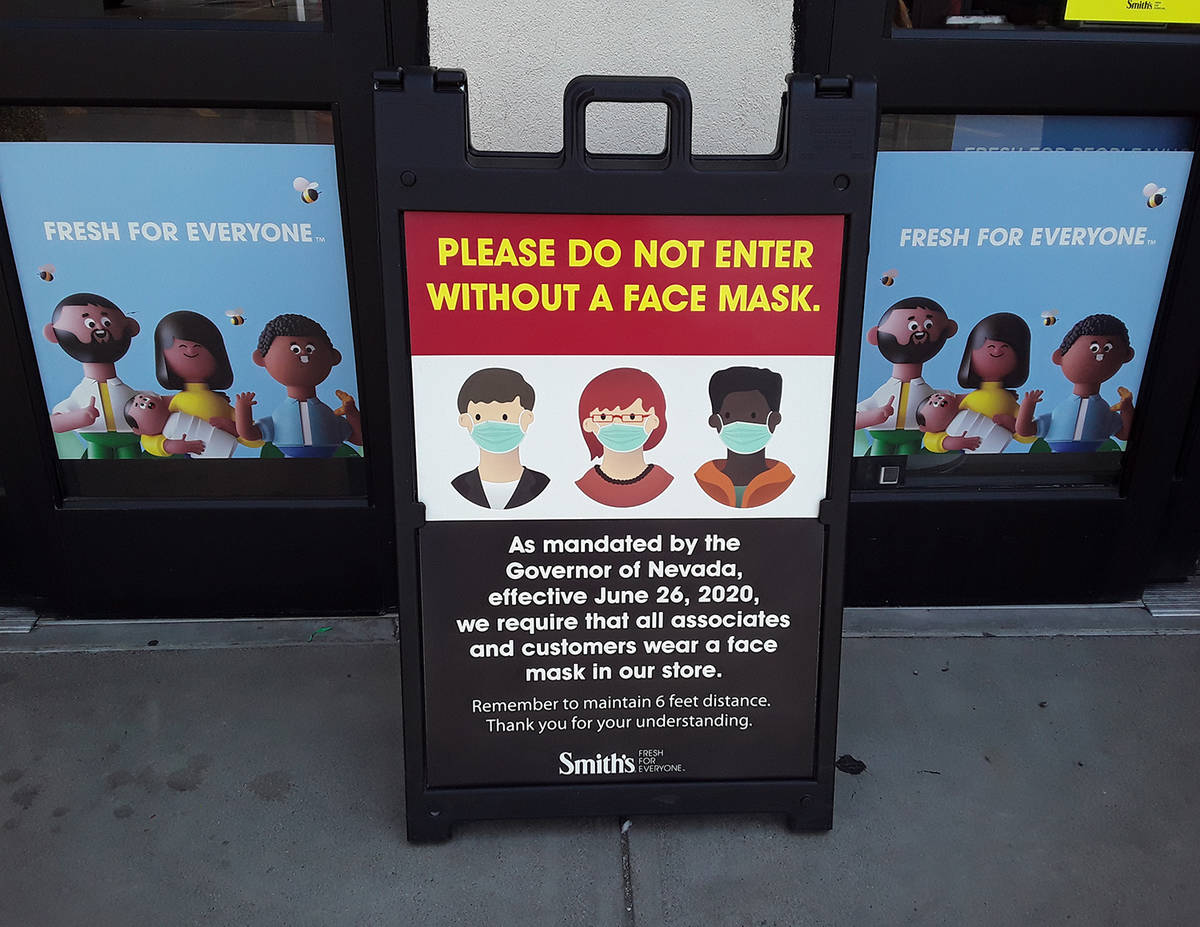 Selwyn Harris/Pahrump Valley Times Numerous signs regarding the requirement of masks are displayed at the entrance of Smith's. Mask wearing disagreements across the country have actually led to violence and even deaths of individuals regarding face coverings in the wake of the COVID-19 pandemic.

A Pahrump man refusing to wear a facial covering upon entering Smith’s Food and Drug Store was promptly “trespassed” from the retailer by a Nye County Sheriff’s Office deputy in early August, according to the sheriff’s office.

The individual, identified as Leo Marchetti, entered the store to make several purchases on Aug. 4, where at least two employees at the entrance requested him to wear a mask, prior to his shopping excursion.

The ensuing encounter quickly evolved into a debate regarding Marchetti’s claimed “medical condition,” as a reason for not wearing a mask inside the store.

When asked by the Pahrump Valley Times what type of medical condition prevents him from wearing a mask, Marchetti did not answer the question.

Marchetti was referring to the Health Insurance Portability and Accountability Act, commonly known as “HIPAA.”

However, according to UNLV’s William S. Boyd School of Law Professor David Orentlicher, simply inquiring about a person’s health condition relating to their refusal to wear a mask, does not violate the HIPAA privacy law.

Orentlicher, who noted that HIPAA is widely misunderstood, is nationally recognized for his expertise in health and constitutional law.

He has also testified before congress and has served on numerous national, state, and local commissions, according to his bio.

“HIPAA is about protecting the privacy of your information that is held by your doctor, a hospital, your health insurer and their so-called business associates,” Orentlicher said. “HIPAA is about making sure that when they collect this information about you, they keep it secure. It’s not against the law for a business to ask what kind of health condition precludes a particular person from wearing a mask. Of course, they don’t have to answer, but it would not violate HIPAA by just asking. In terms of the law, we have the Americans with Disabilities Act (ADA), where if people have a disability that prevents them from wearing a mask, that’s a pretty limited category of people, but there are some. The ADA also ensures that the public is protected.”

Professor Orentlicher also noted that if an individual has a medical condition that affects their ability to wear a mask, it doesn’t mean they automatically get to enter a business without a mask.

“What it means, is that you try to figure out if there are ways to accommodate their disability,” he said. “For example, if they can’t wear a mask, can they arrange for delivery? The person needs to get groceries, but the manager wants to protect their employees and other customers.”

In regards to the Anti-Mask PAC, Orentlicher provided somewhat of a pragmatic response.

“We have pretty good evidence of the value of wearing masks,” he said. “You can imagine some restrictions that intrude on fundamental rights, like speech, or religion, but wearing a mask doesn’t implicate those kinds of fundamental rights. It makes it even more justifiable for the state to say we need you to wear a mask.

Ample signage exists at the entrance of Smith’s stating it is store policy that shoppers wear facial coverings for the safety of all.

There are, however, a few exemptions regarding facial masks.

As stated by the Centers for Disease Control (CDC), masks should not be worn by children under the age of two, or anyone who has trouble breathing, is unconscious, incapacitated, or otherwise unable to remove the mask without assistance.

Marchetti also spoke about the claims regarding the drug hydroxychloroquine as an effective remedy to cure those who have contracted the COVID-19 virus, though medical experts disagree, including Dr. Anthony Fauci, a physician and immunologist who has served as the director of the National Institute of Allergy and Infectious Diseases since 1984, according to his biography.

Fauci, who is a medical doctor, received his medical degree upon graduating from Cornell University Medical College in 1966, as stated in his biography.

Afterwards, he then completed an internship and residency at the New York Hospital-Cornell Medical Center.

Marchetti is certainly not alone when it comes to opposing wearing masks inside businesses within the community.

Last month, the organization hosted an “anti-mask” rally along highways 160 and 372, in the heart of town, sans social distancing and masking.

Commissioner Blundo, with no face mask, also attended the rally, greeting and shaking hands with the upward of 60 individuals in attendance.

When asked about the purpose of the anti-mask rally, Melissa Blundo said it was about an individual’s right to choose.

She also said that Gov. Steve Sisolak’s March 12 declaration of emergency to facilitate Nevada’s response to the pandemic, contrasted with her own personal beliefs in regard to wearing masks for the sake of public safety, which according to the CDC, helps to slow the spread of COVID-19.

“What this really is to me, is two things,” she said at the time. “Number one, the governor circumvented due process, and I understand it’s under an emergency directive. However, it is my choice to protect my health and the health of my family how I see fit, and it’s not for the government to tell me. It has to do with my personal belief and our freedom in America.”

Orentlicher, on the other hand, said he believes that Sisolak took the appropriate action, in terms of public safety.

Nevada Revised Statute (NRS) Chapter 414 states that in times of an emergency, the governor may exercise all powers necessary to promote and secure the safety of the civilian population.

Additionally, the statute outlines powers and duties delegated to the governor during the existence of a state of emergency.

“It’s important that we protect people’s liberties in our country,” Orentlicher said. “It is also important that we limit liberties when they put other people’s health at risk, and the public health powers are one of the most important powers we give our governments. It is important that when there are public health mandates adopted, they should be supported by good evidence. I think what we’ve seen is that our governor has generally been careful to consult medical experts. The Supreme Court and other courts have been pretty clear that as long as you’re acting reasonably, then that’s okay.”

In regards to the Nevada Anti-Mask PAC, Orentlicher provided somewhat of a pragmatic response.

“We have pretty good evidence of the value of wearing masks,” he said. “You can imagine some restrictions that intrude on fundamental rights, like speech, or religion, but wearing a mask doesn’t implicate those kinds of fundamental rights. It makes it even more justifiable for the state to say we need you to wear a mask.”

Marchetti, meanwhile, said he will likely do his shopping at another retailer in Pahrump.

“Walmart and Home Depot don’t restrain anyone or refuse service to anyone who is not wearing a mask, and that was done nationwide,” he said. “That was already on the internet. It was all over the internet. I would go into Walmart since they are not going to refuse me.”

Walmart’s corporate website states the retailer, as of July 20, requires all shoppers to wear a face covering.

These same retailers, and others, are not enforcing these rules, however.

According to a July 26 report on CNN, Home Depot and Walmart, along with other major retailers, will still serve customers who refuse to wear face masks. According to the report, the retailers want to avoid “confrontations between angry customers and employees.”

As of Monday, more than 5.3 million cases of COVID-19 had been reported by the CDC, resulting in the deaths of more than 169,000 Americans.