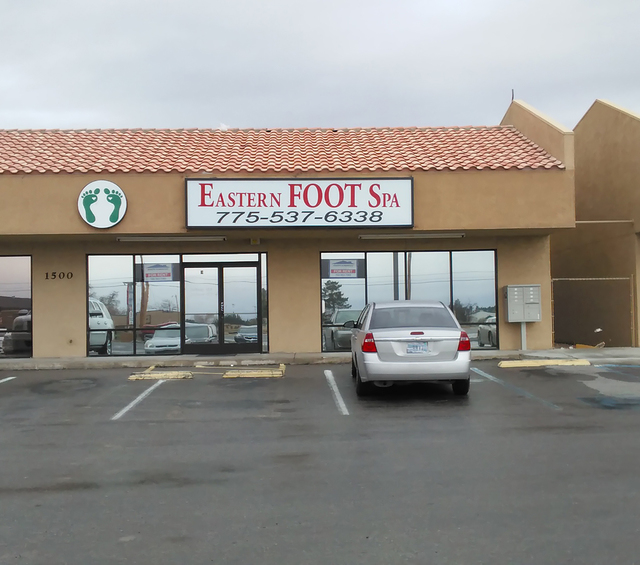 An eyewitness said the owner and employees of the Eastern Massage Spa at 1500 E. Highway 372 were spotted moving equipment and supplies out of the business late in the evening roughly two weeks ago, leaving customers holding gift certificates. Selwyn Harris/Pahrump Valley Times

The landlord of a Pahrump strip mall is exasperated after one of his tenants went out of business closed and left without warning.

The Eastern Massage Spa, known as Eastern Foot Spa, at 1500 E. Highway 372 opened its doors last summer with a three-year lease. As of two weeks ago, the owner of the spa is nowhere to be found.

Landlord Joe Dominguez said the spa’s regular customers have been manipulated in a manner they did not expect.

“I was on vacation for the holidays and I actually received a phone call from one of the other tenants telling me that basically people are coming over and asking them what happened to the massage parlor,” he said. “I tried calling him but he didn’t answer, but I finally got through to one of the girls who manages the place, but I got nowhere with that.”

One employee at another business in the mall, who chose to remain anonymous, said something unusual going on at the spa a few weeks ago.

“It was just getting dark out when I was driving by and I saw a U-Haul truck backed up to the front door and the people were packing all of their stuff into the truck,” they recalled. “I thought it was kind of weird because the week prior to that, they were not open, but they had their sign lit up during their regular business hours.”

The witness also said customers of the spa were going neighboring businesses to inquire about the spa’s closure.

“People were coming up to their door to go inside but nobody was there,” they said. “One of my co-workers talked to somebody who had a gift certificate for Christmas and she was told that she could go to a location in Los Angeles for their massage. They did end up getting their money back fortunately, but all these other people were left out in the cold.”

Dominguez, meanwhile, said the owner of the spa broke a lease agreement by moving out in the thick of night.

Aside from the rent, Dominguez said he put up thousands of dollars to renovate the interior of the business prior to its opening.

“I put up a portion of the $30,000 to get the business ready to open,” he said. “He broke a three-year lease with me and now I have to undo it for the next tenant unless we find another company that wants to do massages there.”

Additionally, Dominguez said every time he visited the spa; it appeared to be doing brisk business.

“I was told that the place was always busy,” he said. “The other tenants said people were always coming and going and everyone had nothing but good things to say about them.”

To add insult to his financial injury, Dominguez also said the business owner attempted to remove the exterior signage from the business after moving out.

“There was also an agreement where when they left, they were going to put the place back to its original condition, which obviously is not going to happen,” he said. “They even tried to contact a sign company and have the monument sign taken off the building which wasn’t theirs to take off to begin with.”

Dominguez did mention a glimmer of hope for customers who received Christmas gift certificates for the spa.

“I know that a lot of people got stuck with gift certificates because I’m getting calls every single day by some of these people,” he said. “I really feel for the husbands who bought their wives gift certificates for Christmas, and now the place is no longer there. From what his associate tells me, if those people contact them, they will refund everyone their money back from those gift certificates.”

As a result of his ordeal, Dominguez lamented that the chances of getting his money back are slim to none.

He did note that the owner always paid rent on time, every time. But pursuing a legal case be expensive at futile.

“To be honest, you just end up chasing your tail because, with something like this, the landlord never wins,” he said. “It’s a civil matter, and they don’t live in Pahrump. By the time I hire attorneys to go after him in California where he lives, he’s probably never going to come to a Pahrump courtroom to plead his case. I could be awarded a judgment, but I can’t collect it because he’s not here and they are not going to issue a warrant for his arrest.”

“The last time I talked to him, he assured me that if they contacted him, and have a valid gift certificate, he would refund the money,” Dominguez said. “I told him aside from burning me with the rent, that he really ruined a lot of people’s Christmas presents. I told him that he basically committed a criminal act by his actions knowing that he was going to close his doors. That’s fraud and you can’t do that. People go to jail for that.”

Dominguez also said anyone who knows the whereabouts of the business owner should contact him.

“What he did was wrong and there’s no excuse for that,” he said. “This man needs to stand up for what he did and pay these people back. As for me, I’m not sure what will become of that space. I’m just going to wait for the next entrepreneur to take that space over.”