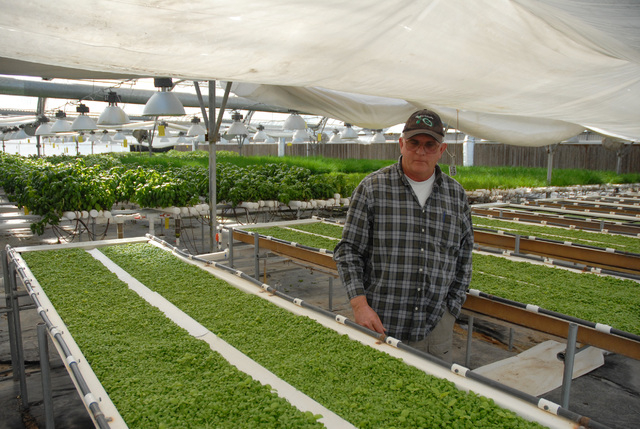 While the water board will examine water impacts, county commissioners will be considering a safety and transportation plan.

County commissioners, in discussing the issuing of special use permits July 16, were concerned over water use by marijuana cultivation facilities.

Green Life Productions, which includes builder Mike Floyd, plans to cultivate marijuana in an existing 8,700 square feet of building space behind the Goodwill store at 1201 S. Loop Road that was formerly part of the Floyd’s Ace Hardware complex.

Floyd said his building is surrounded by a six-foot fence and will have security at night. He told the county commission his property is serviced by Utilities Inc. of Central Nevada and they have 10 acre feet of water rights, plenty for for the business.

Floyd said Green Life will probably have 10 to 15 employees, and plan an organic soil growing operation. Partner Steve Cantwell said they will grow the highest grade medical marjuana strains. Floyd is a member of the Nye County School Board.

Nevada Natural Medicines wants to grow and produce marijuana in an existing greenhouse at 9680 S. Oakridge Ave., where partner Champ Roach has been growing basil for the Las Vegas market. The applicants were already granted a rezoning to a business overlay zone by the county commission July 15, and a waiver from a 10,000-square-foot limit on indoor agriculture in the village residential zone.

Chris Shelton, a partner in Nevada Natural Medicines, said they were approved for a dispensary in Clark County. He said their Colorado operation team has been involved in medical marijuana there since 2000 and were instrumental in passage of the Colorado recreational marijuana law. Shelton anticipates they would employ 45 full-time employees and have security guards on duty 24 hours per day.

Roach said the greenhouse currently uses about eight acre feet of water per year, they have 15 acre feet available.

Nye Natural Medicinal Solutions, which applied for a cultivation and production facility license under NuVeda, plan their facility in a general commercial zoning district at 2801 E. Thousandaire Blvd., near Lakeside Casino. Dr. Pejman Bady, who tended to patients at Health Care Partners in Pahrump, is a consulting medical physician for NuVeda.

The Nevada Board of Medical Examiners ruled physicians could not be partners in medical marijuana establishments, which is still illegal under federal law.

County Commissioner Frank Carbone reminded NuVeda in July they would be starting from scratch on their piece of property. James Davis of NuVeda said it will cost $2.9 million to build the first 30,000 square feet of the property, the second phase will be based on demand. But he said they have $11 million on hand for the project.

Nye Natural Medicinal Solutions will also be on the Tuesday commission meeting. Shane Terry, Solutions’ chief of operations, said the company will create over 75 jobs.

“We hope to inspire leadership and social responsibility,” Terry told commissioners in July. “Our mission is to think globally and act locally for our community.”

Terry said the cannabis industry is plagued by inefficiency and environmentally damaging techniques. He said they will use a hybrid glass roof that will leverage Nevada’s desert environment using 50-to-75 percent less energy.

Ryan Windall, also with Solutions, said the company wants to collaborate with county officials in emergency and security preparedness. They plan to transport the marijuana and cash in armored car vehicles.

“We want any sheriffs or deputies to know exactly how we’re moving that product,” Windall said. “We’re developing a policy that is customized to Nye.”

The county’s lone dispensary selected by the state was The Grove Wellness Center, which has plans to use a vacant strip shopping mall down the street from the Ian Deutch Justice Center, home to the Nye County sheriff’s department and the Pahrump jail.