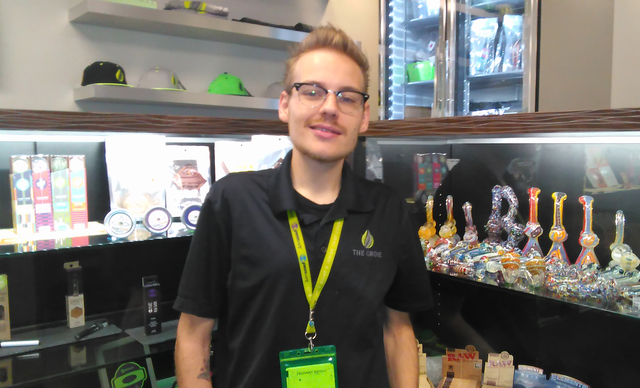 The Grove dispensary Manager Zachary Wright said he’s certain the medical marijuana industry will not be adversely affected by the recent passage of recreational use in Nevada. The facility, which opened its doors last spring, services roughly 70 clients each day. Selwyn Harris/Pahrump Valley Times

Following the January passage of the recreational use of marijuana, there’s at least one big question lingering in the air.

How will the law impact the medical marijuana industry?

Zach Wright, manager of The Grove medical marijuana dispensary in Pahrump, said he does not believe that the lawful, recreational use of marijuana will have a negative impact on his business.

“I still believe that medical patients here at The Grove are extremely important,” he said. “We want to keep them happy and keep products in the store that are recommended for them for their specific ailments.”

Wright said both medical and recreational pot users have at least one Nevada lawmaker to thank. He gave high praise to State Sen. Tick Segerblom, a Democrat from Las Vegas.

“You can consider him the father of the marijuana bill,” he said. “He and other Nevada legislators are doing their best to learn what, if any, mistakes were made in other states where recreational marijuana is legal. They are looking closely at Colorado and how they went on what’s termed the ‘fast track’ program. Colorado went pretty early after the vote, compared to Oregon and Washington, who waited about a year.”

At present, The Grove, the only licensed dispensary in Nye County, services roughly 70 patients each day and the number of medical marijuana cardholders continues to rise.

“The cards are now $100 with a $75 renewal fee,” he said. “Of course, you would need a doctor to sign off on it every year. The prices have come down quite a bit. We actually thought we would see a decrease with the passage of the recreational marijuana bill.”

Regarding users of recreational marijuana, Wright noted that dispensaries statewide could spring up in a matter of months.

“The lawmakers said we could have recreational facilities as early as this July,” he said. “They’re also trying to do something where established medical marijuana dispensaries might be able to sell recreational marijuana.”

When presented with the question about why purchase a medical marijuana card if recreational pot is now legal, Wright pointed to the price of the products.

“A lot of people who are on medical marijuana are also on a fixed income,” he said. “There will be an increased excise tax on recreational marijuana, which will be passed on to the user. When the state taxes it, it’s going to be a 15 percent excise tax. There could also be state taxes and county taxes were each county could come up with their own tax structure as well.”

Wright also noted that there are several serious issues that need addressing regarding both medical and recreational marijuana, as the Drug Enforcement Administration has long classified marijuana as a Schedule I drug, placing it essentially in the same category as heroin and cocaine.

“Recently, the Drug Enforcement Administration is trying to go over the Food and Drug Administration’s head where CBD’s, which is a non-psychoactive cannabinoid, are going to be a Schedule I classification,” he said. “That tells me that we still haven’t progressed far enough with federal legislators to have them make a decision like that.”

Along the same lines, Wright said the American banking industry has yet to embrace the marijuana industry.

The result, Wright said, makes for a potentially dangerous situation for the industry that sells what the federal government labels a Schedule 1 drug with no medical benefit, similar to heroin, LSD and ecstasy.

“Because the banking industry is a (federally) insured industry, we cannot bank because (federal government) consider that money laundering,” he said. “We can’t even use a payroll company that accepts cash because it goes against Nevada state laws. Right now we are just a cash-only business like the other states with a marijuana industry.”

Because of that situation, Wright said all Grove employees are paid in cash.

“We have an ATM here for everyone’s convenience because it’s a cash-only business and all of the employees are paid in cash,” he said. “You get a pay stub, but it is voided as well as the check. We cash it, and they get the actual cash. The funny thing is that we all still have to pay federal taxes, because Uncle Sam always wants his share.”

Wright also issued a warning to medical marijuana users as it relates to employment.

He noted that The Grove does not drug test its employees.

“We understand that there is a difference between substance use and abuse,” he said. “Even a person with a medical marijuana card can lose their job if they test positive for marijuana. That’s the employer’s right, as they can still prohibit the use of marijuana. I can understand that because there are cases where people are operating heavy machinery or any kind of other hazardous job. Marijuana has intoxicating effects, especially if it’s psychoactive.”

Since its spring of 2016 grand opening, Wright said day-to-day operations at The Grove are going quite nicely.

“It’s all good and we have one of the largest selections in the entire state of Nevada,” he said. “Currently we carry nine different strains from Green Life Productions, which is a local cultivator out here. We also carry our house strains and The Grove grows with no pesticides or herbicides. We are all about clean medications here. We are thinking about scheduling a town-hall type meeting in the near future.”

Both medical and recreational pot users are forbidden to use the product in public.

Wright said the only acceptable domain is a private residence.

He also noted that purchasing marijuana outside of a licensed dispensary is also illegal.

“The law states that you can only acquire marijuana from a licensed facility but currently, there are no licensed facilities yet,” he said. “You also can’t cultivate it if you live within 25 miles of a dispensary.”

For additional information regarding obtaining a medical marijuana card call The Grove 775 556-0100.

They are also online at TheGroveNV.com.