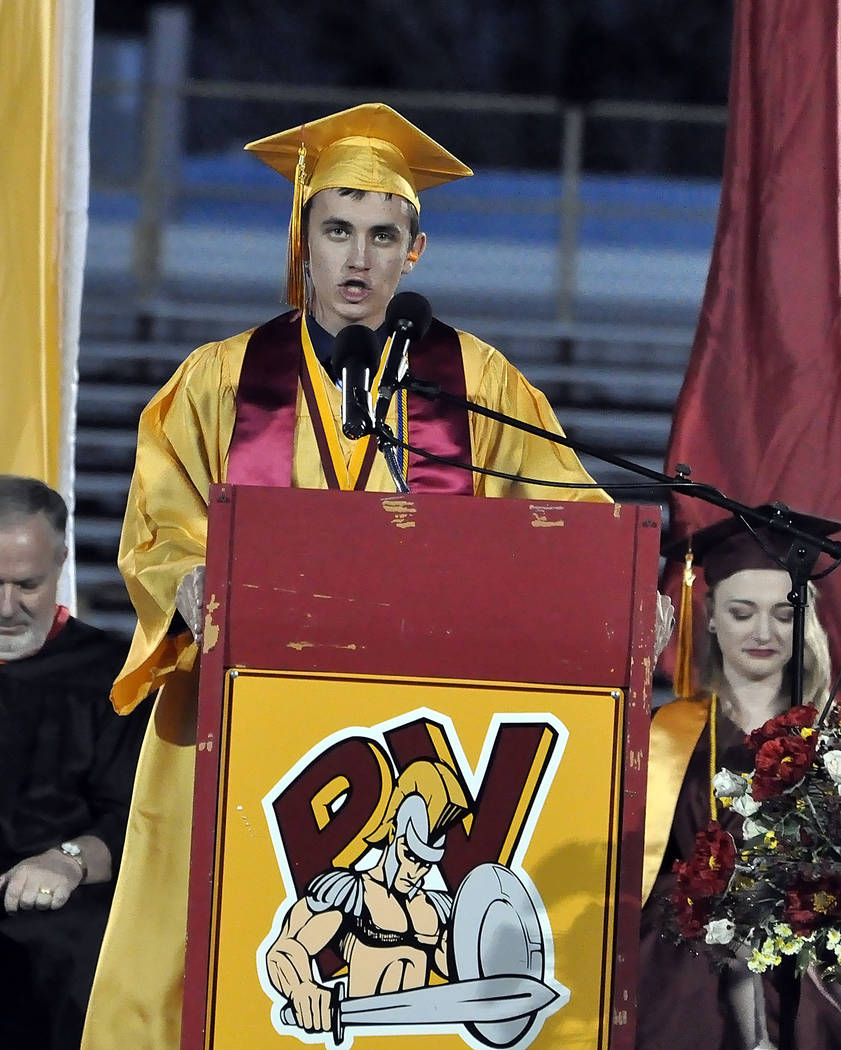 Horace Langford Jr./Pahrump Valley Times Joey Sladek was this year’s Pahrump Valley High School valedictorian with a GPA of 4.78. He will continue on to the Air Force Academy in the fall.

The race for valedictorian at Pahrump Valley High School was so close that the high school wouldn’t announce the winner until all the grades were in.

Joey Sladek finished the year as the top student at the high school with a final GPA of 4.788, barely edging out Bethany Calvert, who finished with a 4.731.

“It came down to the number of honors classes taken,” Sladek said.

Honors classes and are more weighted than normal classes and that’s how students finish with a grade point average higher than 4.0.

Sladek said he had wanted to be the valedictorian since elementary school.

Sladek is a planner and dreamer and knew what he wanted to do when he went into high school.

“I wanted to be valedictorian since I was in fifth-grade,” Sladek said. “And I knew I wanted to go into the Air Force Academy when I was a freshman.”

He will be going to the Air Force Academy this fall.

Joe Clayton, his football coach, had no doubts he would be valedictorian.

“He told me he was going to be valedictorian,” Clayton said. “I believed him.”

His parents were proud of his accomplishments. “We are outrageously proud of him,” the elder Joe Sladek. “He’s quite a driven young man. He knows exactly what he wants to do with his future.”

In his speech on graduation day, the younger Sladek thanked his teachers and spoke about what he learned from them.

One of the fondest memories Sladek will have about high school is being a kicker for the football team.

“It was fun being the kicker,” he said. “It was definitely a unique experience.”

Kicking a ball, next to studying, is something Sladek knew a lot about. The family sport was soccer. Sladek grew up with two older sisters who also studied a lot but when they were not doing that they were playing soccer. After middle school, he made the decision to play football instead of soccer.

Things were different with Sladek kicking the ball. He could kick the ball through the uprights.

“I got the wind knocked out of me during one game when I tried to tackle the runner,” Sladek said. “That’s something I should have learned how to do better.”