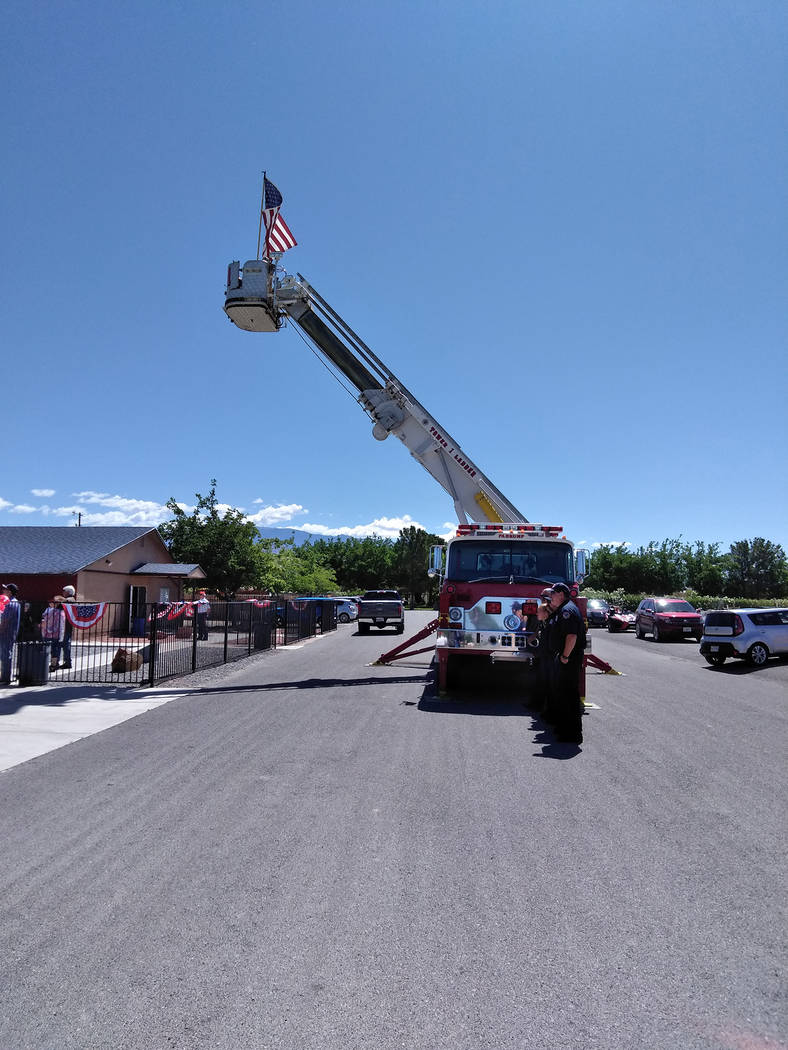 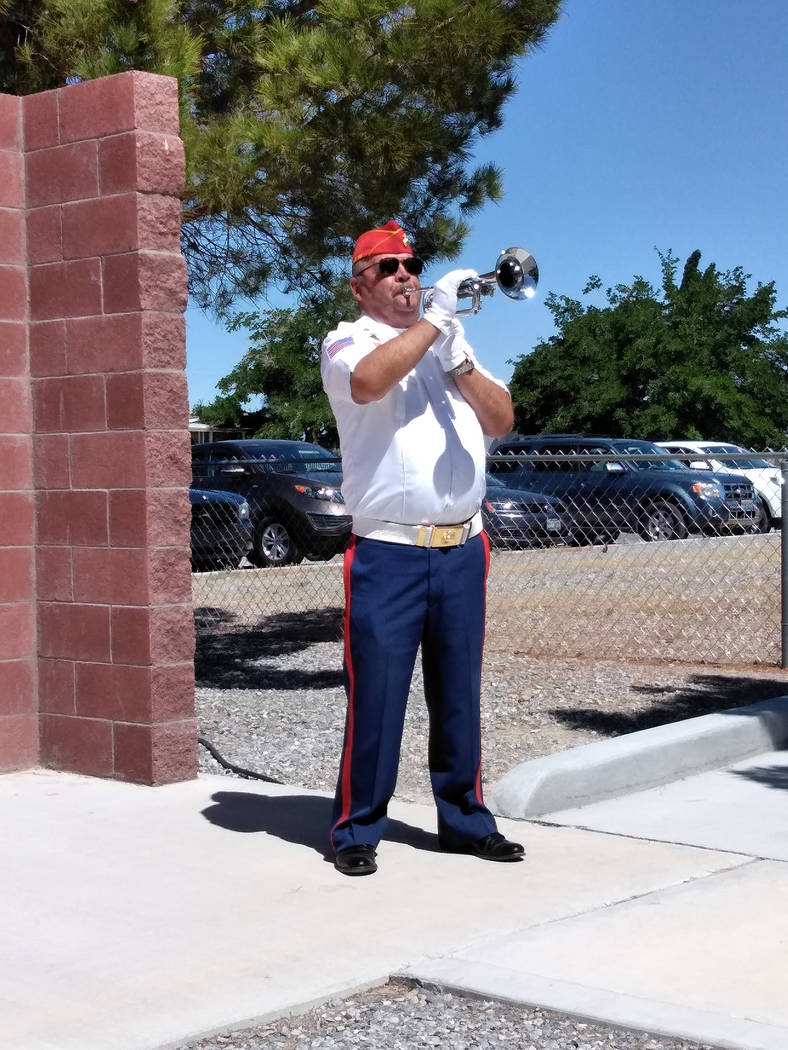 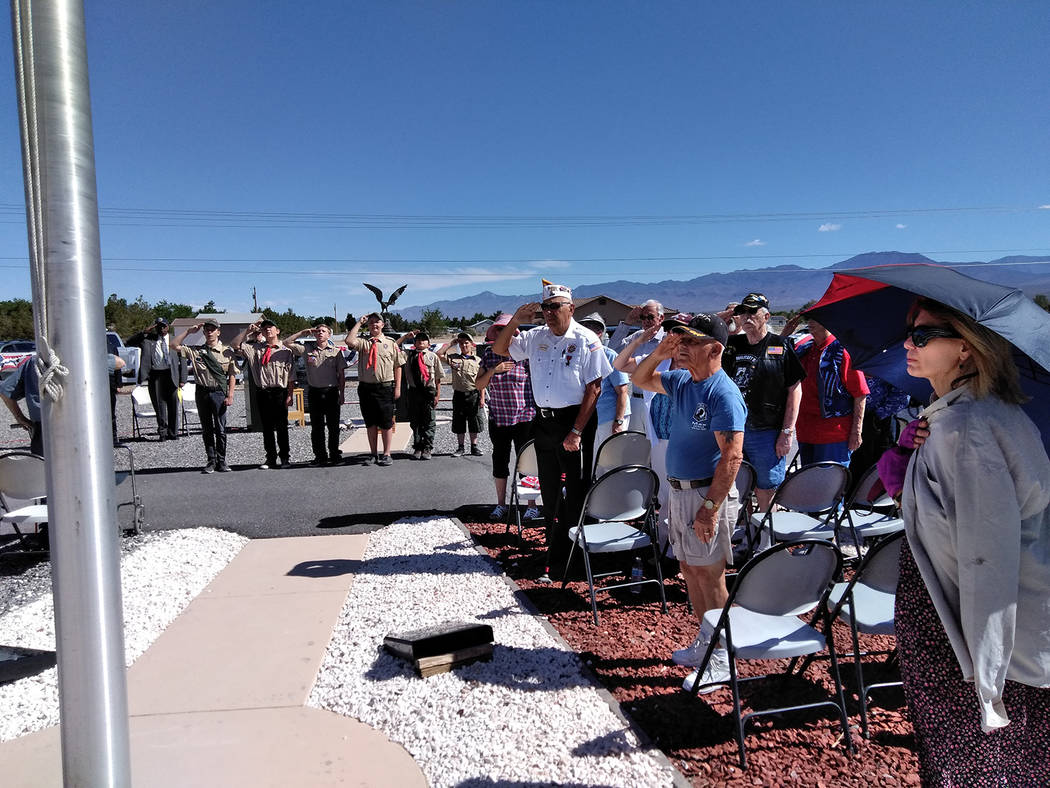 Selwyn Harris/Pahrump Valley Times More than two dozen members of the community turned out for the Memorial Day ceremony at G.G. Sweet Memorial Park on Monday. Many of which, were retired local veterans. 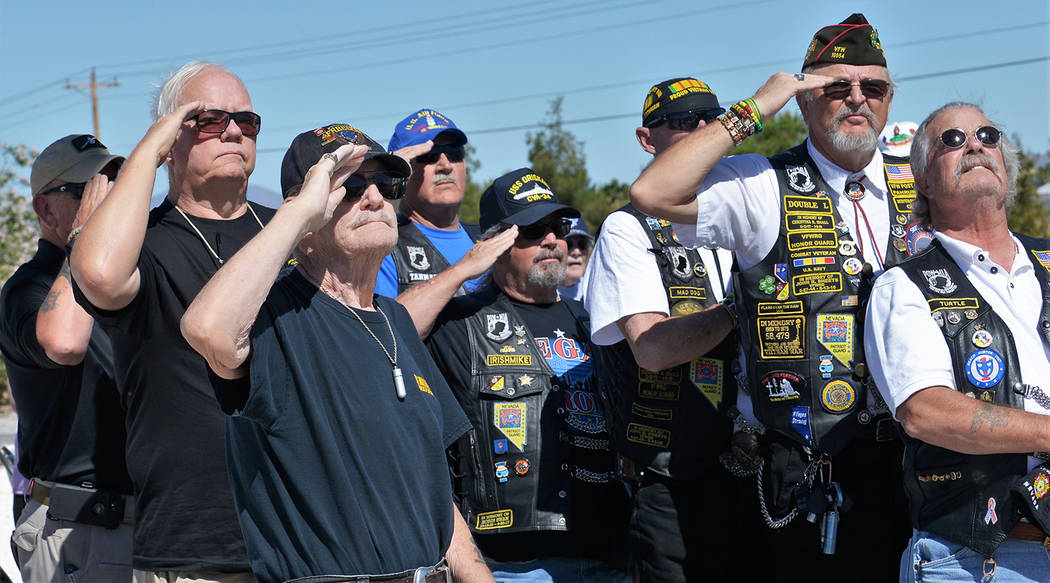 Selwyn Harris/Pahrump Valley Times Local veterans salute the flag during the G.G. Sweet Memorial Day service on Monday. The park, which is open to the public, is located at 1483 Gamebird Road. 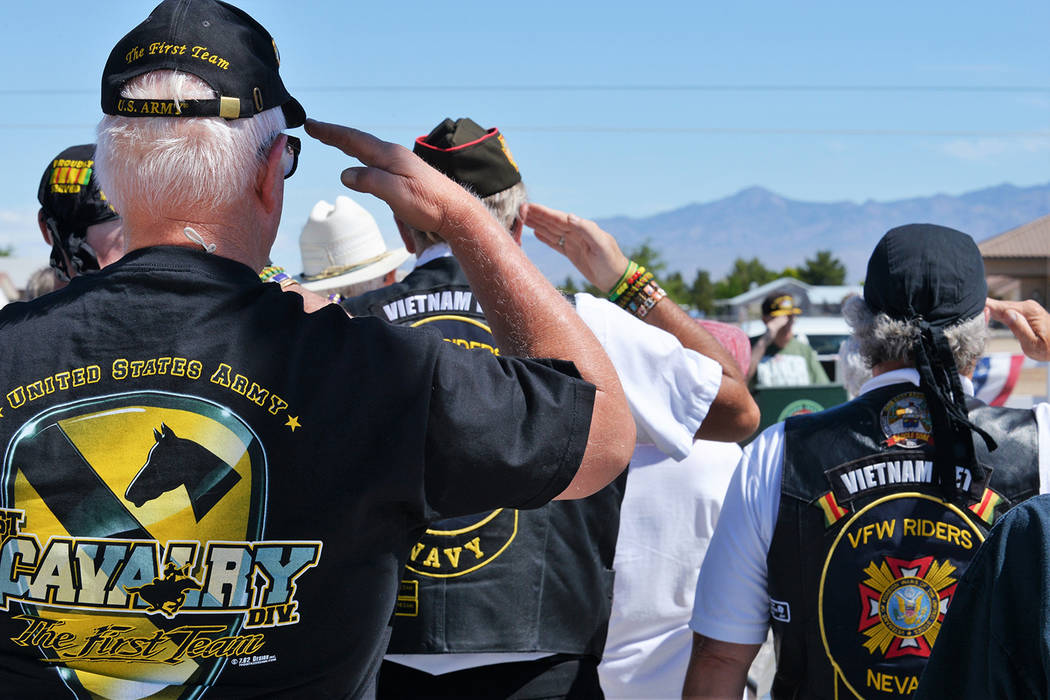 Selwyn Harris/Pahrump Valley Times Representatives from every armed services branch were in attendance at the G.G. Sweet Memorial Park on Monday, which marked the 18th annual observance of Memorial Day at the site. 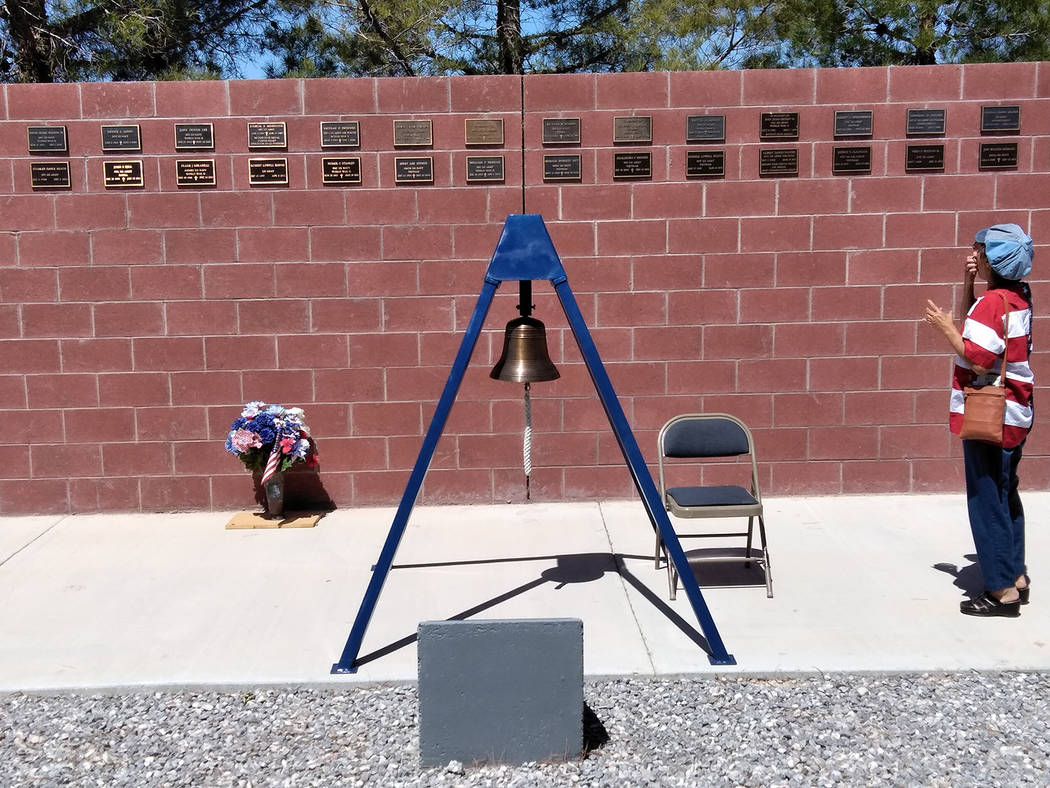 Selwyn Harris/Pahrump Valley Times Remembering those who sacrificed their lives during wartime remains the main significance of the bell toll, which rang incessantly throughout Monday's Memorial Day ceremony at the Pahrump Veterans Memorial.

Sunny skies and mild temperatures greeted those in attendance at local Memorial Day observances over the holiday weekend.

A 9:30 a.m. ceremony on Monday was hosted on the grounds of G.G Sweet Memorial Park at 1483 Gamebird Road.

It was the 18th such Memorial Day observance at the venue.

More than two dozen residents, mainly veterans and their families, were in attendance.

Retired Marine Corps Maj. Roger Chaput presided over the ceremony, where a eulogy and committal rite was conducted for Pahrump resident George P. Jacobs, who passed away earlier this year.

Sweet, who passed away in Pahrump back in 2010, sustained serious injuries while serving as a Marine Corps gunboat captain aboard the battleship USS Nevada during the attack on Pearl Harbor in December 1941.

He also sustained multiple shrapnel wounds after he was blown into the water during the fierce fighting.

Following the observance, many attendees made the short drive to the Pahrump Veterans Memorial at Chief Tecopa Cemetery on East Street for a 10 a.m. Memorial Day ceremony.

The event was hosted by the Pahrump Marine Corps League Detachment 1199.

Commandant Jose Tellas said it was first time the veteran group has organized an official Memorial Day event, complete with a special bell ringing segment throughout the ceremony.

“We did it the military way because everyone saluted each other, and we marched instead of walked,” Tellas noted. “Everything was performed in military style and I was glad that we had a very good turnout. During our service we had a special bell that rang throughout the ceremony. The significance of the bell is to memorialize our deceased veterans. The bell rang throughout the ceremony, including the dog tag placement as well as the speeches.”

Tellas also spoke about his wish to one day see all local armed service groups come together in an effort to consolidate the sacred holiday.

“I am one of the veterans who would like to start a foundation where all of the veteran groups can get together and hold a formal, official, Memorial Day service,” he said. “I think that’s one of the reasons that’s keeping some of our veterans group apart here in town. I would like to have all us together to hold a very fine Memorial Day service. I went fishing, but I did not catch anything yet.”

Additionally, Tellas said he and other area veterans would like to see Memorial Day return to its original date, May 30.

“I learned that Memorial Day was changed from May 30th to the last Monday in May, in order to make it a three-day holiday,” he said. “Memorial Day is not about barbecues and pool parties, or celebrating the upcoming summer season. It is truly about remembering those who have paid the ultimate sacrifice during wartime. The community of Pahrump has always been good in that sense.”

Tellas also noted that the Pahrump Marine Corps League Detachment 1199 will proudly host a memorial service for any local veteran who has passed away.

All anyone has to do is contact me,” he said. “We provide the color guard, the rifle squad, as well as a special flag folding ceremony. As a matter of fact, I was approached at Monday’s ceremony by a family member who wanted to have a memorial service for their deceased veteran. If anyone wants to have a ceremony they can contact myself at 775-513-4659. If I don’t answer the phone, please leave a message with a return number so I can call back.”