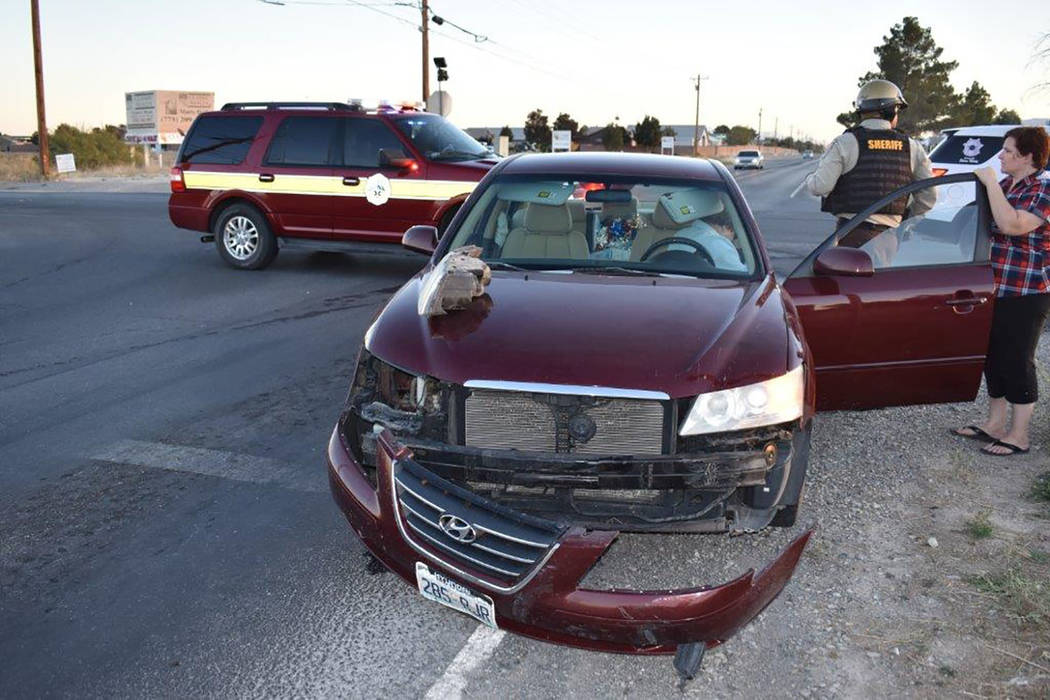 Special to the Pahrump Valley Times Local emergency crews responded to a two-vehicle crash along Homestead Road at Manse on Monday afternoon. The occupants of both vehicles sustained minor injuries in the collision. 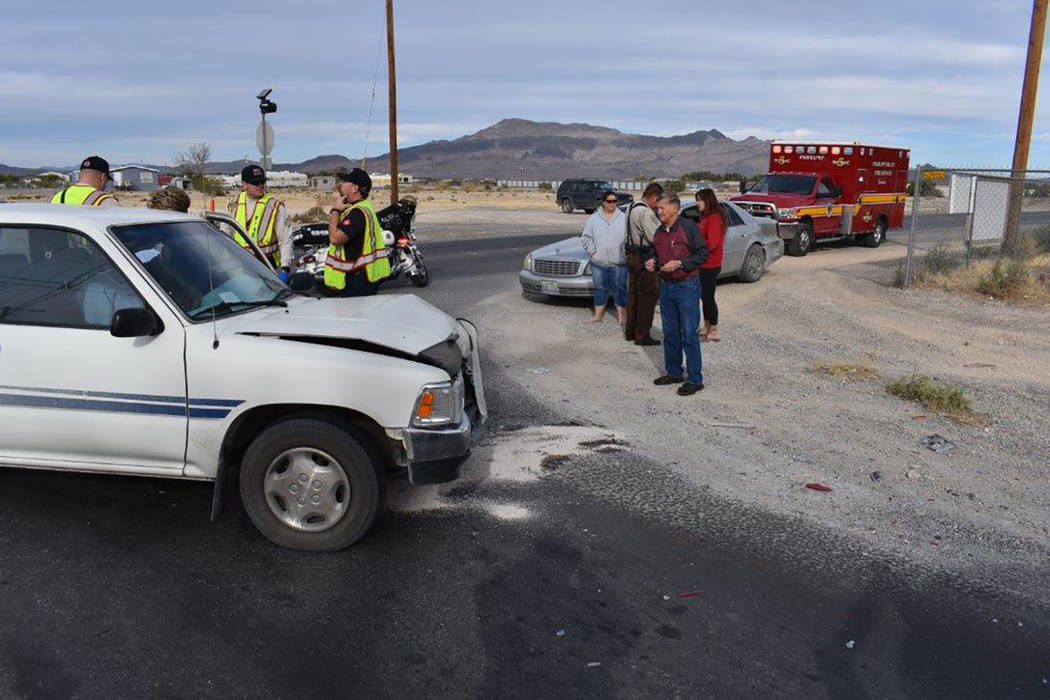 Special to the Pahrump Valley Times Local fire crews were dispatched to the area of of North Blagg Road and East Mesquite for a motor vehicle accident with injuries on Monday. At least one driver sustained injuries, which prohibited him from exiting his vehicle. Crews were able to free the patient, who was then transported to Desert View Hospital. 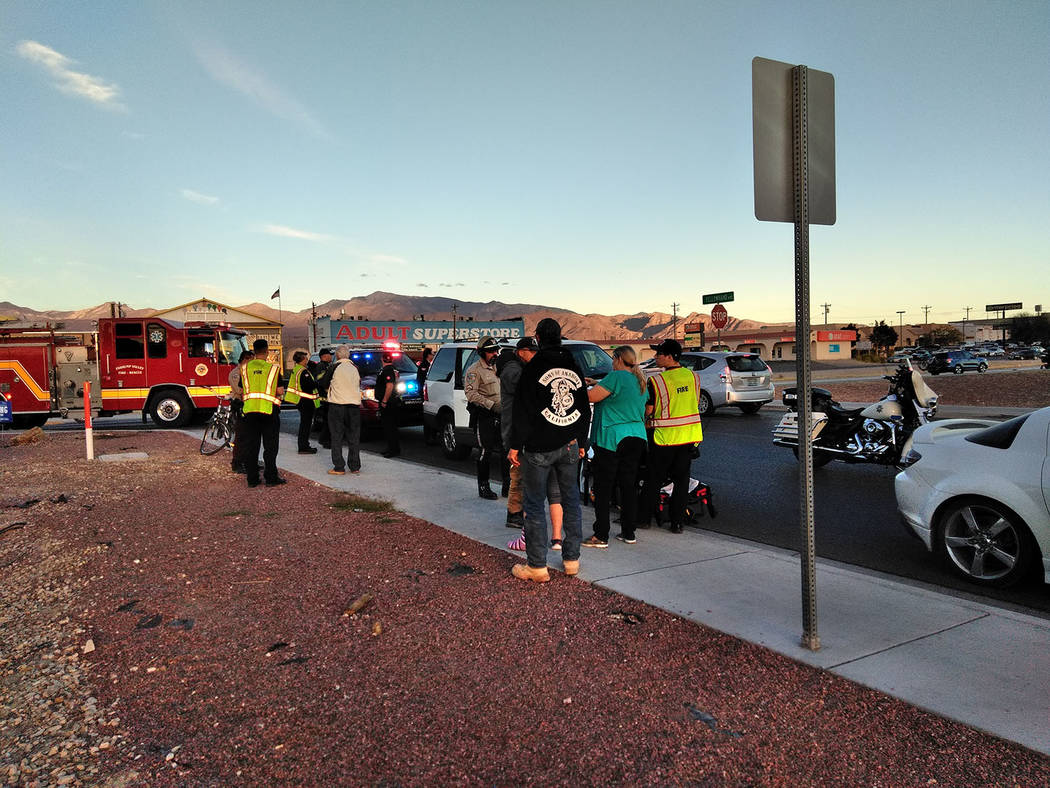 Pahrump area fire crews remained busy throughout last week as they responded to numerous service calls throughout the valley, including a two-vehicle collision on Friday, Nov. 3.

Pahrump Valley Fire and Rescue Fire Chief Scott Lewis said the collision was in the area of 380 South Highway 160 just before noon.

“Upon arrival, crews found a two-vehicle accident as reported with both vehicles positioned on the roadway,” Lewis said. “Crews found no entrapment, however, one of the drivers sustained a serious head injury as a result of the collision. That patient was subsequently transported to Mercy Air Base 21 and flown to UMC Trauma.”

Later that day, Lewis said crews responded to a report of a fire of unknown origin, on the south end of the valley.

That fire, Lewis noted, was in very close proximity to an unattached two-car garage on the property.

“Upon arrival, crews found a woodpile fire,” Lewis said. “Apparently, the activities conducted earlier in the day included a cutting instrument, which deposited a stray slag, in a large wood pile being prepared for a wood-burning stove this winter. It was approximately a cord and a half of stacked wood.”

Lewis also said the residents of the property attempted to extinguish the fire on their own, by way of a garden hose, but the fire was too deep-seated within the woodpile.

“Crews arrived on location, where they protected the nearby exposures, including the main structure and multiple antique automobiles,” he said. “Overall, it was a good operation, but it reminds us to be aware because they were preparing to retire for the evening.

“If they had done so, they probably would have lost a good one-third of their property, including a lot of collectibles. If you’re going to perform those kinds of activities, you want to make sure that the fire is out completely. Even though the temperatures are getting cooler as of late, we want to remind people to be extremely careful with their outdoor activities.”

Friday, Nov. 3, appeared to be a busy one, as fire crews responded to yet another fire on the 1800 block of East Elderberry Street, for a report of a trash receptacle fire.

“Upon arrival, crews found what appeared to have been a rubbish fire in a plastic 55-gallon trash can,” he said. “That situation should serve as a reminder for residents to use appropriate receptacles when burning. There was no contact with the owner of the property and that fire was extinguished without incident. There was no extension to the structure.”

On Sunday, Nov. 5 crews were dispatched to a reported early morning rollover crash at North Linda Street in the area of West Mesquite Avenue, at approximately 12:24 a.m.

“Upon arrival, crews found a van had overturned, in close proximity to a structure,” Lewis said. “There were no occupants located at the scene, fearing a possible ejection of the occupants. Following a search of the area and having found no one in the immediate area, the search was discontinued. It is my understanding that the person was located at a Las Vegas-based hospital.”

One person transported to hospital

On Monday, Nov. 6, crews were summoned to the area of North Blagg Road and East Mesquite Avenue for an injury motor vehicle accident.

“Upon arrival, crews found a two-vehicle accident as reported,” Lewis said. “The initial investigation revealed that one driver sustained a medical issue that prohibited him from egressing from his vehicle. We refer to that as a medical entrapment. Crews assisted that patient from the vehicle where they were transported to the local hospital.”

Lewis also spoke about a weekend event taking place along southbound Highway 160 on Saturday morning Nov. 4, where a world-record attempt for the fastest road car took place after 6:30 a.m.

Lewis said he and his crews were on standby along South Highway 160 at the Tecopa turnoff, on the Clark County side of the highway.

“The crews consisted of Heavy Rescue One, along with Medic One, who were assigned to the world-record attempt, which was successfully completed at 277.9 miles per hour. On another run, the speed was clocked at over 284 miles per hour. Following that event, our assignment was completed without incident. It was great to be part of such an event, as it was well managed by officials at the Spring Mountain Motorsports Ranch.”