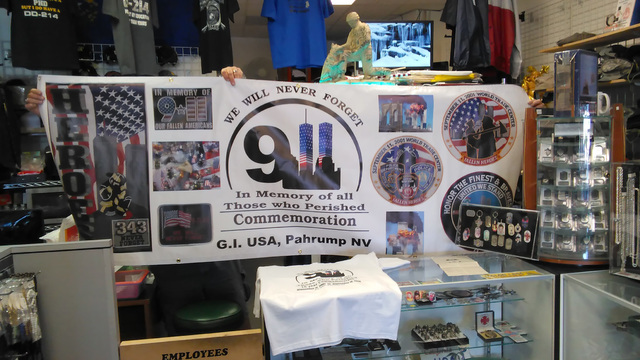 The owners of GI USA business display a custom-made banner in observance of Sunday’s 9/11 ceremony in the Albertson’s Plaza, 200 S Highway 160, on Sunday at 7 p.m. Past patriotic-themed events hosted by the owners have drawn more than 1,000 attendees. Selwyn Harris/Pahrump Valley Times

The owners of a patriotic-themed business are hoping for a large turnout for Sunday’s 15th 9/11 observance.

George and Cindi Vroenen of Pahrump’s GI USA want to break the Guinness Book of World Records for the largest number of individuals holding glow sticks during a single event, beginning at 7 p.m.

Guinness officials informed them about the application approval for the record.

Cindi Vroenen, a native New Yorker, noted Pahrump resident Linda DeMeo was the first to come up with the idea of using the glow sticks several years ago.

Record-breaking efforts aside, Vroenen said the event would honor the more than 400 police officers and firefighters who were among the nearly 3,000 souls that died on that morning.

Sept. 11, 2001, was the worst terrorist attack in American history.

“We have veterans who feel that it’s very important to recognize not only the responders to 9/11, because 9/11 affected all of our lives in one way or another,” Vroenen said. “We are still at war in the Middle East because of 9/11.”

Vroenen said when word reached the community of the event, numerous individuals, organizations and businesses expressed interest in participating.

A drone will provide for aerial photography for the duration.

“The community has really jumped aboard and proving that they are always there to support these kinds of activities,” she said. “Every organization in town is on board with donations or will be out here to help break the Guinness Book of World Records.”

Additionally, Vroenen noted that there are certain guidelines to follow if the record is to become official.

“They have to actually hold the glow sticks because we are going to be chalking a line to replicate the towers out of the glow sticks,” she said. “In the center of it, we want to spell out the words ‘Never Forget.’ Even if we don’t break the record, just the fact that so many people are going to be part of this, I think it’s worth a try, and we should have a real good shot at breaking the record because it’s really not a big number to accomplish.”

Vroenen also noted that those who take part in the ceremony would qualify for various raffles and prizes during the observance.

“As long as they participate in the glow stick record-breaker, they are eligible for all the food and raffles,” she said. “Everything will be free, and we are giving away 250 different items valued from $10 all the way up to $100. When everything is over, we will eat and hand out the prizes and raffles.”

Vroenen also wanted to thank all who offered their support for the endeavor, as numerous individuals and businesses have come forward to assist, including the Law Offices of Glen Lerner, who purchased more than 5,000 glow sticks.

Pahrump Valley High’s JROTC leader Lt. Col. Patrick J. Nary is overseeing all of the planning for the event Vroenen noted.

“Bob and Vicky Clark also donated a beautiful patriotic quilt,” she said. “I also have another customer who hand-made a quilt with patriotic designs. I want to thank all of the people who have come forward to offer their help in providing the food and everything else.”

Vroenen made mention of the fact that many young people to this day still do not fully understand the events of 9/11.

“This is the 15-year anniversary, so there’s a whole generation who are not aware of this fully,” she said. “It’s hard to believe that it’s been 15 years since that tragic day. We will also give away toys to all of the kids who come out. We have fire and rescue toys, rubber band bracelets for little girls, and soldier toys for the little boys.”

The Vroenens routinely host annual events at their 150 S. Highway 160 location at the Albertsons Plaza.

Past patriotic-themed events have drawn more than 1,000 people.

“We got the okay this year to turn off the lights in the parking lot for one minute where a moment of silence will be observed,” she said. “We will have an opening ceremony and then the benediction. We all remember where we were when we first heard about it which is why this observance is so important.”