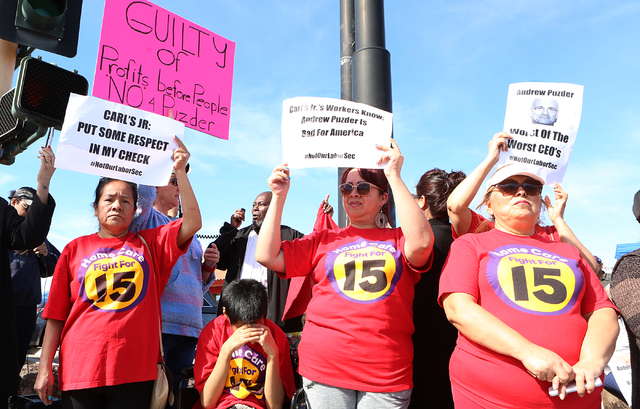 CARSON CITY — A proposed amendment to the Nevada Constitution that would raise the minimum wage saw support from education and opposition from business during a Senate committee hearing.

Ruben Murillo, president of the Nevada State Education Association, testified in support of the bill and said that parents who do not earn a living wage affect their children’s ability to do well in school. A lack of nutritious food and an inability to participate in their children’s education because they work more than one job are factors, he said.

Randi Thompson, Nevada state director with the National Federation of Independent Business, testified in opposition to the resolution.

“Small business is the engine that is driving Nevada’s economic recovery, creating 60 percent of net new job growth,” she said Wednesday. “Smaller companies make up 98 percent of Nevada’s employer base, and compose more than 43 percent of Nevada’s total jobs base of nearly 1.34 million. I fear this bill will impact the very businesses who are creating those jobs.”

Nevada’s current minimum wage is $7.25 an hour for employees who are offered health benefits from their employers, or $8.25 an hour without health insurance.

The resolution was heard by the Senate Commerce and Labor Committee, which took no immediate action. Another measure that would raise the minimum wage through state statute is also still alive in the Legislature.

Senate Bill 106 would raise Nevada’s minimum wage more quickly, by 75 cents per hour each year until it reaches $12 an hour without insurance and $11 if insurance is provided.