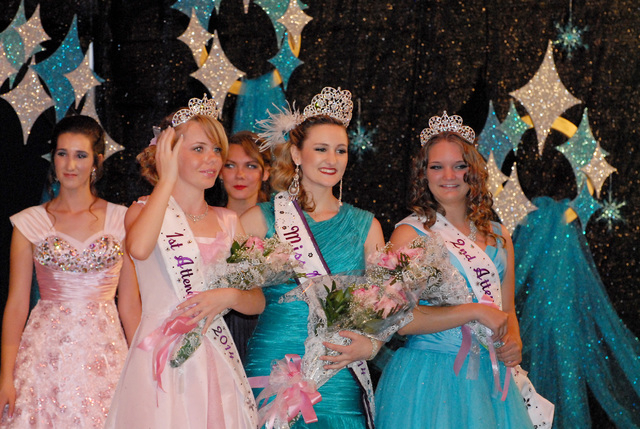 This year’s Miss Pahrump Pageant isn’t until June 13, but in order to participate, all contestants must attend the orientation meeting on Monday at 5:30 p.m. at the Best Western RV Park Clubhouse.

The contestants must be between 13 to 18 years old and have their application filled out along with the $80 entrance fee.

The chairman of the Miss Pahrump Pageant, Debra Bowman, is excited about this year’s event and talked about the history of the pageant. She explained how Miss Pahrump was more than just a beauty pageant.

“I really cringe when I hear the words ‘beauty pageant’ for this really has nothing to do with beauty,” she said. “There is one portion of the contest that judges how photogenic a contestant is and the rest is poise and talent.”

Bowman also emphasized that the pageant didn’t have a swimsuit portion to it.

She said the first pageant that was strictly a pageant was held in 1976. She said before that the Miss Pahrump contest was all about who sold the most rodeo tickets at the Harvest Festival.

Bowman said one element that makes Miss Pahrump more than just a beauty pageant is the scholarship aspect, which awards the winner $500.

“This pageant has been a scholarship program since 2004,” she said.

The chairman said the girls compete in four categories: sportswear, evening wear, talent and there is a stage question.

Bowman believes the pageant helps the girls with their confidence. She said her own youngest daughter, Ashlee, had trouble speaking in public and was really shy. She did Miss Pahrump for three years and now has no problem singing in front of people.

In addition to helping young women with poise and confidence, Bowman said the pageant strives to teach the contestants usable skills.

“We do workshops in poise and how to do interviews,” Bowman said. “We coach them and give them life skills.”

Bowman also said the pageant was more than just winning.

“I hope for the young women that this is not all about winning,” she said. “I believe the young ladies should be working hard to excel and not to just win.”

In the talent aspect of the pageant, Bowman explained that over the years she has seen some creative demonstrations.

One year a girl did archery and played a video of a Disney animated movie about a young female Viking character that was an archer. In the video, she played the Disney film alongside her shooting arrows.

This year pageant organizers expect anywhere from nine to 20 participants. The pageant board also thanked Saddle West for donating the space for the pageant.