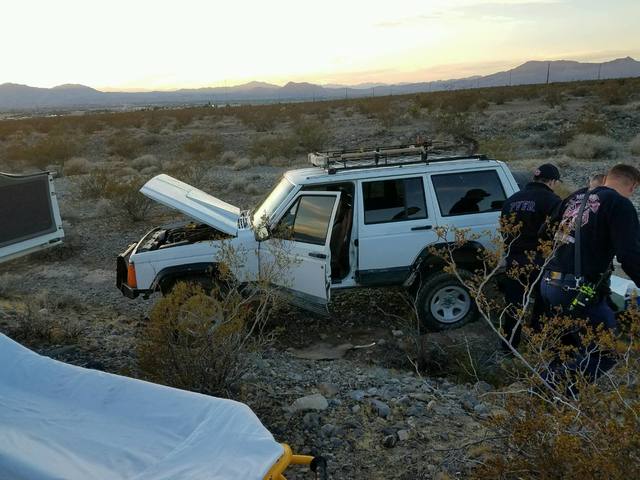 Special to the Pahrump Valley Times A Pahrump EMT team rushes to aid Jeffrey Holmes. The 62-year-old was reported missing when he went off-roading and his jeep got stuck in a ravine. Brett Chumley, owner of Mom’s Diner, found Holmes yesterday while riding his off-road vehicle east of the Channel 46 studio. 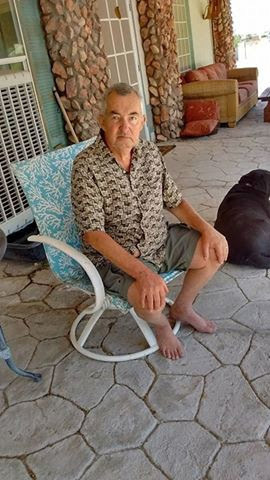 A senior citizen who was reported missing Wednesday was found in the desert after spending the night alone in his vehicle.

The Nye County Sheriff’s Office said that Jeffrey Holmes, 62, was reported missing by his family, who were concerned because he also has medical issues which require him to take medication on a daily basis and could affect his mental capacity. According to his family, Holmes would be unable to walk any distance from his vehicle and call relatives if he was off his medication.

As luck would have it, Brett Chumley, the owner of Mom’s Diner, stumbled upon Holmes while off-roading east of Channel 46 on BLM land, just before the sheriff’s office sent out its statement on the missing man.

“I just saw this white jeep out of the corner of my eye as I was driving on the road and it was stuck in a ravine,” Chumley said. “The door was open and I knew I had to stop to see if the driver was OK.”

Chumley stopped his car and found the man, who turned out to be Holmes, in the vehicle.

“He was out four-wheeling like me and got lost,” he said. “He had run out of gas because he ran his car all night to keep warm. I had no idea he was missing.”

Chumley also said that Holmes was confused about where he was and he had no phone with him.

“He had no clue where he was,” Chumley said. “He kept saying he was 1000 feet away from the winery and well, he was a couple of miles. I called it in and waited for the ambulance and police to arrive.”

The sheriff’s office said once his identity was confirmed, it was found that he was in good health.

“Mr. Holmes is in good spirits, was seen by the medics and was returned home,” the sheriff’s office said. “We are all thankful for a positive outcome.”

Holmes had been reported missing on social media by family members earlier in the day.

The sheriff’s office initiated a search, which was conducted by the Southern Nye County Search and Rescue unit in an attempt to locate Holmes. Also, the state Search and Rescue coordinator was notified, with additional resources requested in an effort to expand the search area.

The Civil Air Patrol was requested to fly a grid pattern from Holmes’ residence out 100 miles in an effort locate the missing man.