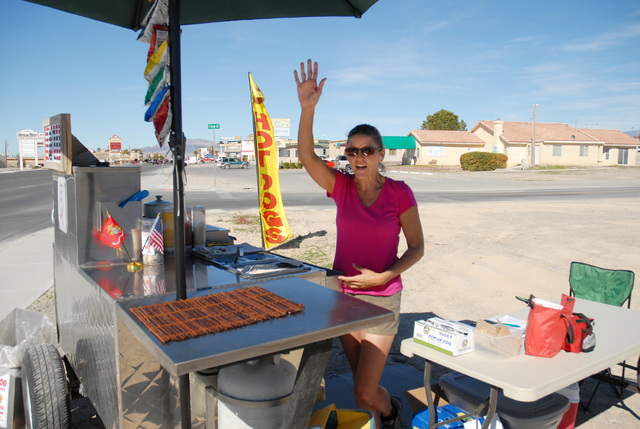 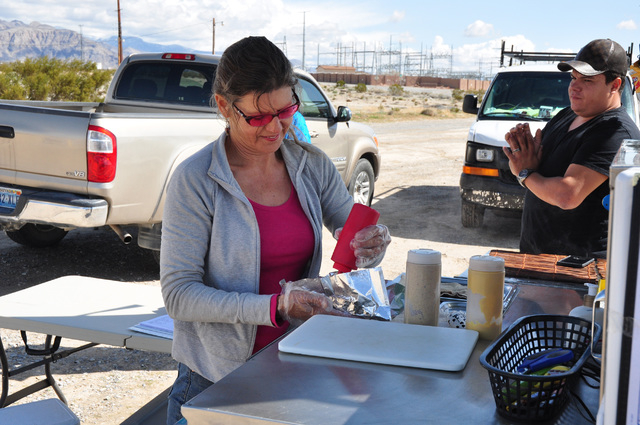 Wright was a caregiver for 10 years and when her client passed away she found herself without a job and getting a new one at 46 years old proved more difficult than she thought.

“I thought of getting a job with the state,” Wright said. “I put in a few applications and didn’t get anywhere. I didn’t even get called for an interview.”

So she decided to do some research on being self-employed and her brother mentioned selling hot dogs. At first, she thought he was nuts.

“I mean I am 46 and he wants me to sell hot dogs,” Wright said. “I just wasn’t feeling it. I then did some research and I changed my mind and felt that I could make this a viable business.”

In her research, she discovered that people were very nostalgic towards hot dog carts.

She then found out operating in Nye County was not complicated, just a lot of paperwork but nothing she could not handle.

“Of course this takes work,” Wright said. “Anything worth doing is work. If you have a half a mind and you are going to start a business it will take effort on your part. It won’t just come and land on your lap.”

The hot dog stand was easy enough to get, she found that online in Las Vegas and bought it used. Next came the bureaucratic maze she had to navigate.

She had to get insurance to operate at festivals and for her business in general. She said this ran $300 for an annual policy. Wright then had to get inspected by the health inspector.

The state of Nevada has two inspectors in Nye County. She said they inspected the cart’s wells and refrigerator to make sure that all the temperatures on the cart were within compliance. She said that was about $175.

Wright then had to go to the town to purchase a business license. She had to get one from the town and one from the state. The town cost $175 and the state was about $250.

Once she had licenses she had to go to the planning commission to get approval from them. She said this was unusual but they are apparently keeping track of all the food vendors in town.

From the planning department Wright then completed her application for an LLC and this cost $400. When it was all said and done she had spent $1,295 in just paperwork.

From start to finish she said it took several months for her to get going. She said she started the process in November and didn’t start selling until January.

“I think it would take you a couple of months before you can actually start your business,” she said. “This is my first business, and I kind of expected the paperwork to take a while.”

The town of Pahrump says though you can get their paperwork processed and it takes two weeks just for the town paperwork so Wright was a typical business.

Her dogs go from as low as $3.50. A meal with chips and a drink goes for $5 and you can get two dogs for as low as $6. Of course that can’t compete with the .75 cent hot dog from the gas station, but people go to her for her all beef dogs and the great service.

“I am there for the people who want higher quality and personal service,” Wright said. “When you try to compare gas station hot dogs to mine it’s like comparing apples to oranges, besides who do you want to support, me, a single mom or the big corporations.”

Wright said things are getting around by word of mouth that she is out there. People come all the way from Vegas to eat from her cart.

“I came here because I heard she was the best,” Marvin Perez from Vegas said. “We are working at the 76 gas station and they told me this place was good and they are. These are great.”

Perez bought one and quickly chowed it down and then bought another one because he loved the first one.

Bill Vaness loves hot dog stands and regularly bought from them when he lived in Chicago.

“I like Polish hot dogs,” Vaness said. “I can’t get them anywhere else as good as this place. I just saw her out here.

For some reason it is different when you buy it from the cart, I think you get better service.

Wright says she has only been in business for a month but thinks she will be able to make a living off of the hot dog cart. She says she averages just under her goal of 30 hot dogs per day.

“For the most part I think this is going to work,” Wright said. “I think people like me and I am nice. I just like to make people happy. Obviously it shows. Of course there is always lingering doubt.”