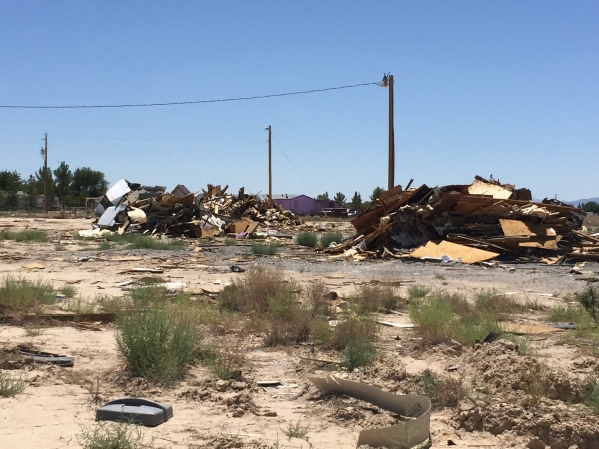 Nye County will have to identify a funding source for the cleanup of a site that had been declared a nuisance, officials said.

An estimated $20,000 was needed to clean up a 10-acre property located at 3401 E. Savoy Blvd. The site contains multiple hazardous structures, junk vehicles, trash, broken objects and debris, according to the information provided by commissioners.

“This property had been declared a nuisance by the county commission,” Commissioner Dan Schinhofen said. “We had begun to clean it up with the metal being taken off. Now, there are piles of trash. I’ve gotten numerous calls from neighbors who tell me every time the wind blows, the stuff goes in their yards. So what I’m asking is the board finish what they started with this project.”

Nye County Commissioners approved the plan at the Jan. 21, 2014 meeting to proceed with abatement procedures, however the county lacked the funding for the cleanup.

“It was declared a nuisance, (but) we didn’t have the funding to clean it up,” Nye County Manager Pam Webster said. “We did go in and try to get as much scrap metal off of the project as we could to try to fund the abatement. We only received about $2,500 worth of scrap metal income so it doesn’t go very far against what we need to do here.”

Webster said she only has rough estimates of what the cleanup would cost. To get quotes, Webster said first she has to identify the funding source.

“All I’m asking you to do is reserve money from the contingency fund authorizing me to go out and get quotes on this cleanup,” she said.

“There’s tipping fees that will come back and this property will be liened to recover the money,” Schinhofen added.

While the $20,000 was reserved on the project, Webster said she will not spend the money until she presents the final figure to the commission.

“It’s to say that I have the authorization to get quotes and I have money backing me up, but I will not spend it until I come back to the board with the final number and at that time, you can make a final decision because I am looking also at another funding source, but I have to confirm through review of some ordinances and things,” she said.

“I want to proceed in parallel with that research because this needs to be done as soon as we can.”