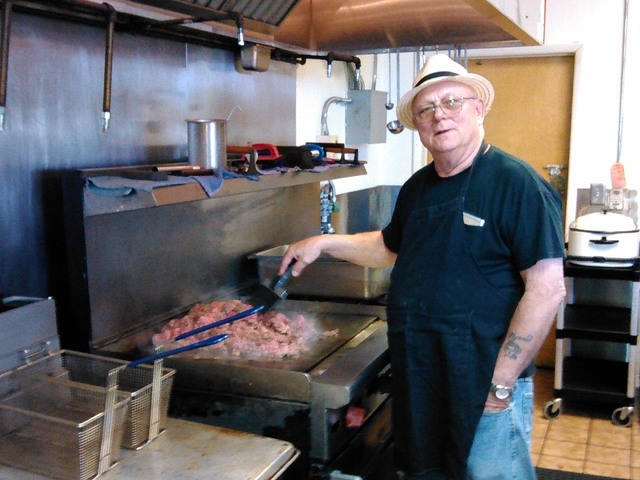 Marla Quercia has her dog to thank for saving herself and her husband’s lives on the morning of April 6, just after 4 a.m.

The dog kept barking to alert the couple their Osky Street home was on fire.

Though fire crews were quickly dispatched to the residence, it was a total loss, as the Quericas lost everything in the flames.

The only items salvaged were the clothes they hastily put on as they escaped the inferno.

As a result, the Pahrump Moose Lodge # 808 is holding a benefit fundraiser tomorrow.

On the menu is mostaccioli (pasta with sauce), salad and garlic bread.

A raffle and bake sale are also planned.

As lodge member William Hansett was preparing the ground beef, he explained why the lodge stepped up to hold the event.

He noted that Quercia is also a fellow moose.

“We just want to help them get back on their feet and we decided this would be helpful to her,” he said. “They’re just trying to recover from the loss and re-establish their life. They have a lot of friends at the moose.”

The Querica’s have come to rely on the generosity of their friends not long after the fire.

The couple developed severe health problems and were hospitalized for a period.

“Two weeks after the fire, my husband had a heart attack and I’ve been in the hospital three times because my pancreas stopped working and now I’m a type-one diabetic. We didn’t realize it would that stressful,” she said.

As a charter member of the Moose lodge, Quercia said she’s very blessed to have such caring and compassionate people around.

The self-proclaimed “old timer” has lived in the community on and off since 1970.

“Everyone has stepped forward to help in one way or another,” she said. “Three hours after the fire, we had seven people come to us and offer their homes to us. It made me want to cry. I love being in Pahrump and the community.”

Quercia said she and her husband were at a loss about their immediate future as all of the personal belongings including cash, credit cards, and photographs were destroyed by the fire.

“I had no identification,” she said. “All I had was the muumuu I was wearing. It was a complete and total loss of our vehicle and everything else. As catastrophic as it is, I can’t tell you how many blessings have come into our lives since the fire. This is such a very caring community.”

There’s no set cost for the dinner, as donations will be greatly appreciated.