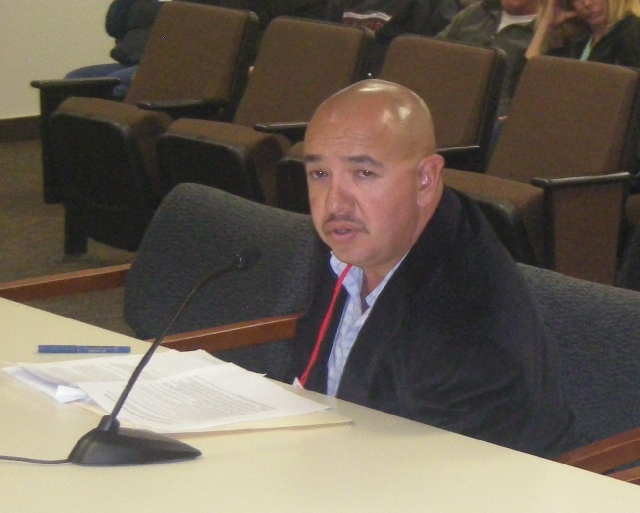 Morales organized a Good Friday community meeting at the Pahrump Nugget Hotel and Casino prior to a hearing before the Pahrump Regional Planning Commission April 10 that attracted more than 50 people. Jim Smyth, with the law firm of Kaempfer, Crowell, Renshaw, Grounauer and Fiorentino, along with Hugh Walker from SCS Consulting, fielded questions.

That community outreach didn’t produce dividends, however, as the RPC voted 3-2 to deny Morales a conditional use permit. RPC member Greg Hafen II made the motion to deny, because of the proximity to half-acre lots zoned village residential and concerns by Desert Utilities about a nearby well.

Morales was confident this week he could persuade a majority of county commissioners to overturn the RPC decision on his appeal.

Morales said the project would create 25 to 30 jobs. The site is already approved for a gravel pit, which he plans to open with a crushing plant.

Before the RPC meeting, residents were flooded with robo calls and fliers claiming Morales would import truckloads of toxic waste, that drew a capacity crowd to the commission chambers. Morales said those claims were totally false.

“Now I feel confident that most of these folks found out the truth that we’re not going to hurt a soul by bringing concrete, wood and dry wall out there,” he said.

During RPC testimony, Morales said there’s already a deep pit at his property that he would use for the landfill. It would be a class III landfill designed to hold construction debris which could include concrete, asphalt, wood, metals, glass, brick, insulation, rebar, electrical wiring and plumbing fixtures.

Morales’ originally proposal was for a class I landfill, that would have to be lined but could accept other types of waste.

Morales’ project, The Nye County Landfill, would require permitting from the Nevada Division of Environmental Protection, a hydrologic investigation wlil be part of the approval process.

Morales is sweetening the pie by offering to donate 5 percent of his net profits to the community — half of that to the town for parks and recreation facilities, the other half to the Nye County School District.

The advertisements show pictures of what would be accepted at the landfill — concrete, lumber, glass and metal — along with what will not be accepted: toxic waste, biohazard waste, dead animals and household trash.

The Nye County Depository would be separate from the Pahrump landfill on East Mesquite Avenue, where Pahrump Valley Disposal dumps household trash.

The advertisement shows a photo of water bubbling on a surface and states, “the materials brought to the Nye County Depository will never contaminate the Pahrump Valley water table.”