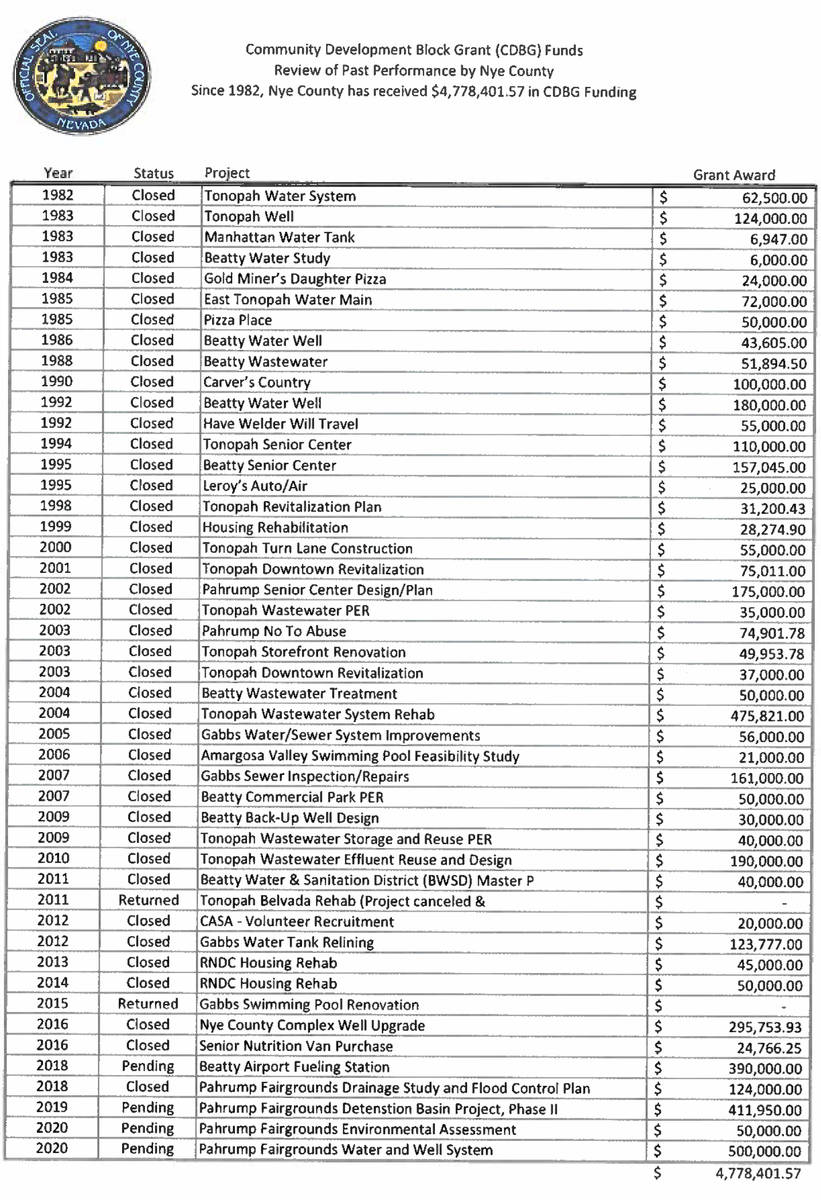 Special to the Pahrump Valley Times Contained in the backup information for the Nye County Commission's July 21 meeting, this list details the projects that Nye County has been able to help fund using the Community Development Block Grant program.

As part of the process necessary for participation in the Community Development Block Grant program, the Nye County Commission received its second round of potential project presentations this month, outlining various ideas for utilizing the funding that will be available for the 2021 grant cycle.

The first round of proposals went before the commission on Aug. 18 and included pitches for the Pahrump Fairgrounds, parking lot repairs in Tonopah and demolition of the Nye Regional Medical Center in Tonopah. During the commission’s Sept. 1 meeting, several more ideas were put forward, including road repairs for the Hadley Subdivision in Round Mountain and the construction of a facility for the Pahrump Disability Outreach Program, as well as expansion of a gun range and establishment of a soup-kitchen-style operation in Pahrump.

Round Mountain Town Manager Pearl Olmedo was the first to present a project, with a request for funding to assist with road repairs in the Hadley Subdivision. “It is a hefty amount, broken down into seven phases,” Olmedo stated, noting that all seven phases were estimated at approximately $3.7 million in total. For now, the town was focused on phase one, which would come at a cost of $710,000 and would cover repairs for Hadley Circle.

“We are desperately needing some assistance with Hadley Circle, which is our main road within our subdivision,” Olmedo told commissioners. “Not only with the deterioration, there’s a compaction issue that could potentially, if not already is, impacting, or could potentially erode or break, our main water and sewer lines. So we would like to address the infrastructure before our public utility system could potentially be damaged in the future.”

She added that the town was prepared to offer in-kind contributions of construction vehicles, along with approximately $500,000 in funding that has accumulated over the years and could be dedicated to engineering costs.

Nye County Commissioner Lorinda Wichman, who as the area’s commission representative for nearly 12 years, is very familiar with the area, pointed out that as the situation stood that day, the town of Round Mountain was responsible for the maintenance of its own roads. This was because the town collects gas tax funding itself, in the amount of about $60,000 per year, rather than turning that money over to the county as all the other communities in Nye County do in order to help fund the county’s road department.

“I absolutely agree, they are going to lose their water and sewer if somebody doesn’t do something,” Wichman stated. “My question is, does your board yet have the appetite to turn that gas tax back over to the county… I have been before your board three times, asking for a resolution to be signed, for that 1994 resolution (allocating the gas tax to the town instead of county) to be reversed. I would love to see your board stand up with the political fortitude it takes to get that done… It would be extremely helpful to have that resolution in the backup that you provide when it comes back again for the CDBG. A signed resolution.”

Olmedo said she would pass that information along to the Round Mountain Town Board.

Next to present a project was Khalif Gordon with Second Amendment Guns, a new gun store and gun range being developed in Pahrump.

Gordon said private funding and funding through Meadows Bank has already been secured for the first phase, which is set to include a retail shop as well as a six-lane indoor shooting range on Basin Avenue. He said he felt the block grant program would be a good fit for a second phase of development, which would incorporate more shooting lanes as well as a training simulator that could be used by the Nye County Sheriff’s Office in addition to the public. He was asking the commission to sponsor his application in the amount of $850,000.

“What we feel is that we’re going to need more lanes for training for the community. That would also open up the chances to of course employ more people from Nye County, and also to educate,” Gordon explained. “One of our biggest purposes in coming to Pahrump is the educational aspect.”

“With the funding of that building, PDOP would be eligible for additional funding from several other grants and resources to provide the service we’re proposing. However, in order to get a lot of that funding, you need to actually have the center up and running,” Boruchowitz explained.

As it stands today, PDOP focuses on providing support to disabled children and adults in Nye County and it would like to be able to expand its operations to include vocational rehabilitation and employment training for individuals with disabilities.

“PDOP is currently renting a small office location without sufficient space or resources to provide these services,” Boruchowitz said. “The purpose of this project is to construct a permanent location for the Pahrump Disability Outreach Rehabilitation and Education Center to provide services to the community. The center will be the hub for information and resources for those with disabilities throughout the county.” He noted that currently, PDOP has 125 families, each with one or more members with disabilities.

As Boruchowitz’s presentation came to a conclusion, Nye County Commissioner Donna Cox recommended he look into county properties that have been on the tax rolls for a while, to see if there is anything suitable for the purpose, which would cut out a large amount of the cost. Boruchowitz said he would definitely get together with county manager Tim Sutton to discuss that possibility.

Last to speak on the agenda item was Melissa Fay with Miracles of Madness, a nonprofit organization just getting its start here in the valley. Though she did not have a formal presentation prepared, Fay said she had a very solid vision of what she would like to do and that is to open a diner-style soup kitchen with a donation-only concept.

“I think that it’s needed in our community, across the board,” Fay emphasized. “Not just for our homeless, or veterans, but for everybody who sometimes cannot afford a meal otherwise. Our homeless population is more than just the people sleeping up in the hills. We have plenty of people living on other people’s couches, plenty of people out of work right now.”

Each of the proposals that were presented to the commission during the Aug. 18 and Sept. 1 meetings will undergo eligibility screening by the Community Development Block Grant program and those that are determined to be qualified for the program will be brought back to the commission for prioritization. The county is permitted to submit two applications for itself and sponsor an additional two applications on behalf of any outside entity. The commission is scheduled to vote on which projects it will submit applications for at its Tuesday, Nov. 3 meeting.