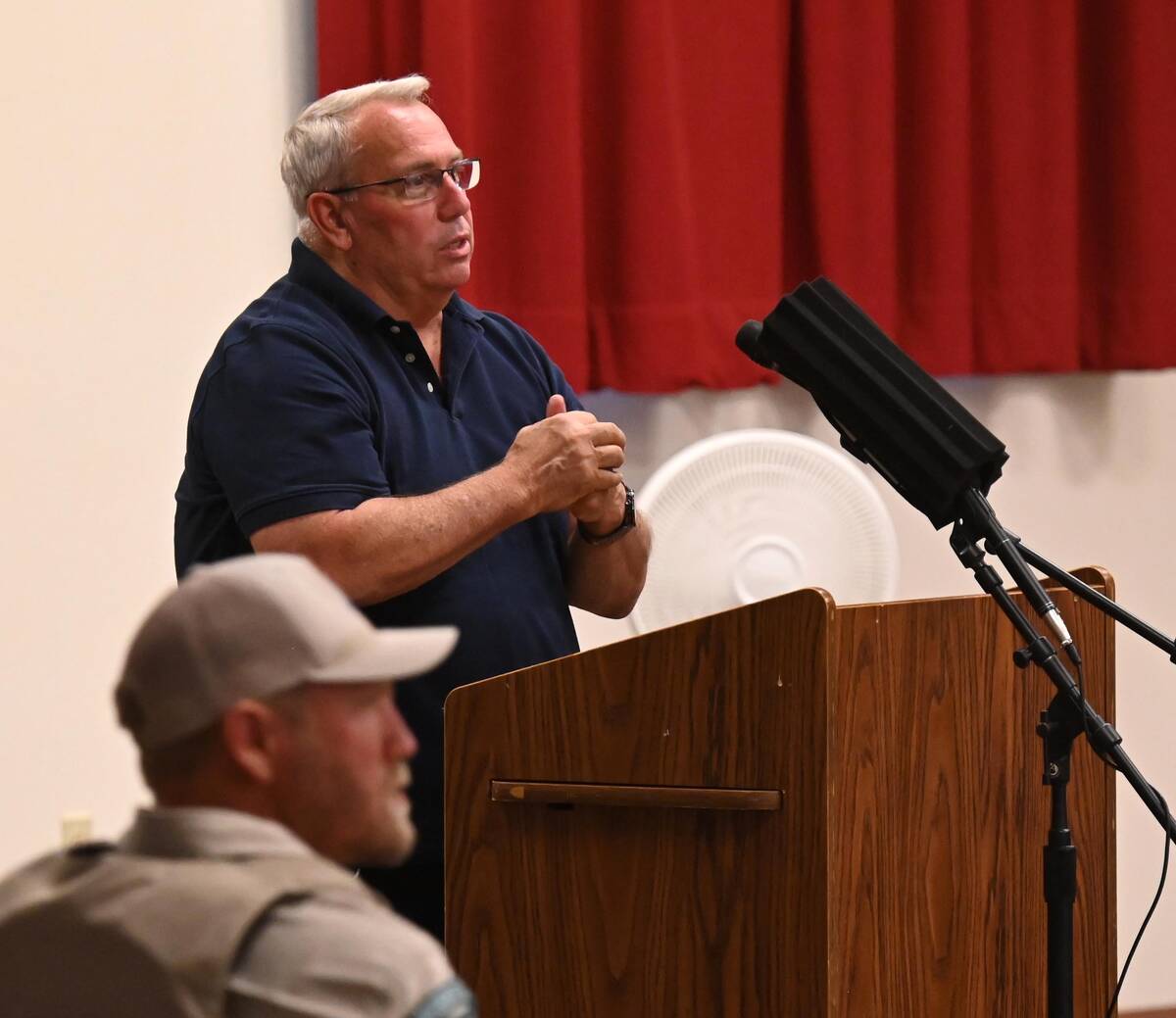 Richard Stephens/Special to the Pahrump Valley Times Anglo Gold Ashanti representative Wayne Chancellor gave the board an update on the company's operations in the Beatty area. 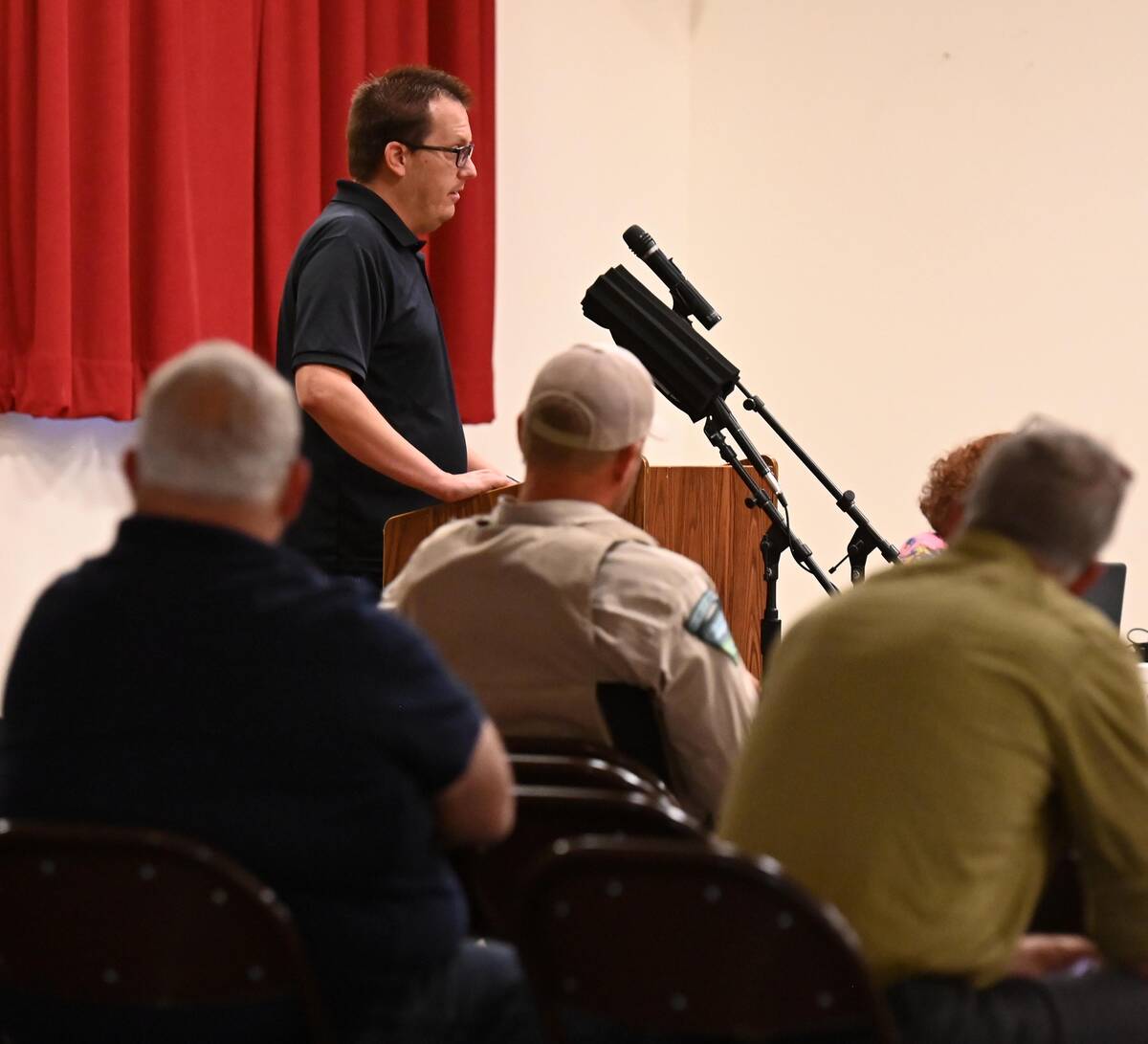 A Monday, June 27 presentation to honor Beatty EMS volunteers was canceled and will be rescheduled for a later date. The recognition was to have taken place during the Beatty Town Advisory Board’s regular meeting.

Board Chair Erika Gerling explained that she made the decision to cancel the event because of a current surge in COVID-19 infections. She did not want to create an event that would bring a large number of people together in the same space.

Attendees and participants at the board’s meetings have almost entirely gone maskless in recent months, but some once again donned their masks for this latest meeting.

BLM Pahrump Valley Field Office Manager Nicholas Pay gave a presentation to the board on renewable energy project applications his office has been dealing with.

Pay said that they were “sitting on” 30 applications for projects, 15 of which were in Amargosa Valley. He said that, unlike some other federal agencies which have to justify a “yes,” his agency has to justify a “no.”

Some of the concerns the BLM is considering in evaluating the applications include impact on wildlife, such as the desert tortoise, protecting the “windscape” of Big Dune, and water use.

Pay said that water use by solar energy installations would mostly be in construction, and that modern solar panels do not require regular washing.

The agency has also reached out to Nye County and the National Park Service to hear their concerns.

Some participants were surprised when Pay said there had been an application for a Point of Rock project to survey wind energy potential. He clarified that, although it was being called Point of Rock, the location was actually closer to Highway 95.

Pay said he would make the effort to make more frequent visits to report to the town board on these matters.

Anglo Gold Ashanti representative Wayne Chancellor gave the board an update on the company’s operations in the Beatty area.

The AGA project closest to becoming an operating mine is the North Bullfrog. It is in what is called the feasibility stage, with the decision of whether to proceed with construction expected next year.

Chancellor said that the company plans to begin construction of its office facility at Montgomery and Third streets within a month or two and, in the meantime will make use of a mobile home next to the Beatty VFW post.

He also talked about AGA’s current and future involvement in the community. The company has helped with the Bighorn Outback Explorers Poker Run and will be taking part in the Fourth of July celebrations and Beatty Days. They are working on a recycling program, and have established a $2,500 scholarship at Beatty High School.

AGA plans for a Beatty working group to keep tabs on community needs and concerns, and will work through a foundation to provide community contributions, donations, and scholarships.

After the presentations the board approved the sending of two letters.

The first letter was to Mark Stallions, CEO of Valley Electric Association, recognizing the work of three Beatty VEA workers who helped with some of the town’s street lighting.

The other letter was to go to local business owners asking for “their assistance in recruiting and supporting volunteers” for the Beatty Volunteer Fire Department and Beatty Volunteer Ambulance Service.

Gerling explained that they send such a letter periodically asking for help in recruiting and also asking that volunteers be allowed to leave work to answer emergency calls. The town stands ready to help with training costs.

Editor’s note: This story corrects an earlier version that mistated the amount of a scholarship.