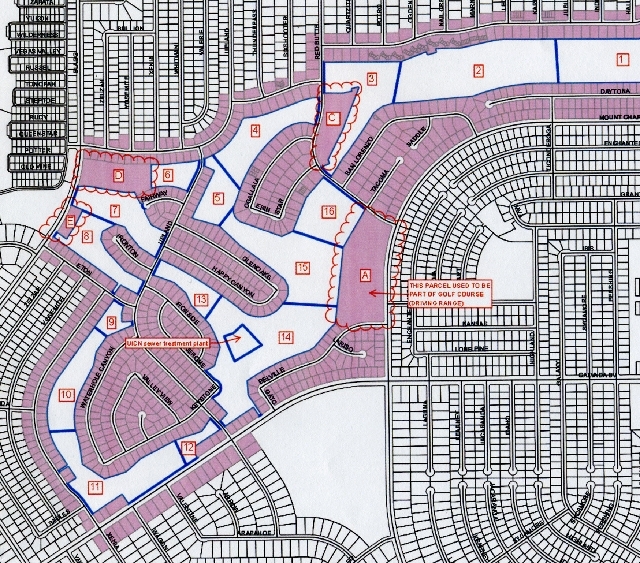 The motion sets out a potential modification to a June 5 settlement plan created out of former Willow Creek owner Caldera P&G’s bankruptcy case. The confirmed Chapter 11 plan called for Nye County to pay $100,000 and take possession of easements on six parcels on the former golf course to be used as park land and flood control.

Utilities Inc. of Central Nevada would grant those easements and take possession of nine more parcels of the property — the water utility at one point had six liens against the golf course, claiming Caldera owed it more than $1.7 million.

A third creditor, money lender Michael Zucaro, would receive the 9.1 acre parcel containing the former course clubhouse free and clear of any encumbrances. Zucaro has a $537,500 claim against Caldera.

The July 26 motion to modify the plan states in no uncertain terms that the bankruptcy trustee was ready to move forward without Nye County’s participation.

“Nearly two months after confirmation, Nye County has not provided the funds to the bankruptcy estate, and recent events have led the Trustee to believe that Nye County is unwilling or unable to take the necessary actions to provide for timely consummation of the plan, if at all,” the motion states.

The modified plan calls for UICN to pay the county’s $100,000 contribution to the estate and keep its easements.

Sources close to negotiations between the county and UICN said early this week that disagreements over the county’s responsibilities in the bankruptcy plan — for example, the county would be required to maintain any ponds that are located in the parcels where the easements are as well as grounds keeping, repairing water lines and other duties — created an impasse. Meanwhile, the bankruptcy trustee, Joseph Atkins, is funding costs of the bankruptcy estate out of his own pocket to the tune of almost $5,000 a month.

According to a June 5 filing outlining the bankruptcy plan, the Trustee sought implementation of the agreement within 11 days of its confirmation.

“The Trustee understands that Nye County and Utilities (UICN) have not been able to agree on easement language. Neither has Nye County had a county commission hearing to authorize payment of the $100,000. As a result, the Trustee has deemed the plan to not be substantially consummated and has filed a motion with the court to modify the plan in order to break through the gridlock,” the attorney said Wednesday.

County Manager Pam Webster confirmed that negotiation had been ongoing but hinted this week that the impasse had been broken.

“The county is considering its options,” she said Wednesday.

The following day, an item on the Aug. 6 board of county commissioners agenda suggested that commissioners will indeed vote on whether to accept the agreement and pay the $100,000 or forego participation in the plan.

The item is listed under the district attorney’s portion of the agenda and reads, “For Possible Action, discussion and deliberation to approve proposed agreement to participate in bankruptcy plan for Caldera P&G related to Willow Creek Golf Course parcels.”

Webster referred further questions to Brian Kunzi, the district attorney and ostensibly the county’s chief negotiator on the plan’s language. He did not, however, answer phone calls or emails seeking comment by press time Thursday.

Atkinson did tell the Pahrump Valley Times that if commissioners approve the payment on Aug. 6, he will rescind his motion to modify the plan.

A hearing on the matter is scheduled for Aug. 7 at 2 p.m. in federal bankruptcy court.

“Nye County has until the hearing time to substantially perform on the obligations imposed on it in the current plan,” Atkinson said.

Meanwhile, Tom Oakley, chief of staff for UICN’s CEO, confirmed to the PVT that his company was ready to go forward regardless how county commissioners vote on Tuesday.

“Certainly we all understand that it’s difficult for governments to move on agreements like this. It’s just tough. There are a lot of approvals and everything else. When Atkinson came to us and said that we needed to move on it. We were willing to step up and do what we thought was necessary to protect the agreement. It’s a good agreement,” he said.

The plan will still need to be approved by the state’s Public Utilities Commission and Nevada Division of Environmental Protection.

Asked what plans UICN has for the old golf course, Oakley said any ideas are too premature to discuss now.

Sources, however, have told the newspaper there could be significant development on the property, which is surrounded by mostly upscale single-family housing.

“It will be nice to get the Willow Creek stuff wrapped up. As I told you earlier we want to get the deal done for the benefit of the citizens of Pahrump. We obviously need the property to accept our treated effluent and to eliminate the pond hazard out there that was created by Jim Scott (Caldera’s principle) before the bankruptcy. If the County can get through the government wrangling associated with this type of deal, great. If not, we’ll continue to move forward with the Trustee on our own. Either way, it’s good for the community,” Oakley wrote in a follow-up email to the newspaper.

When told how nice it would be if something positive were finally done with the dilapidated course, once a gem in the community, he agreed.