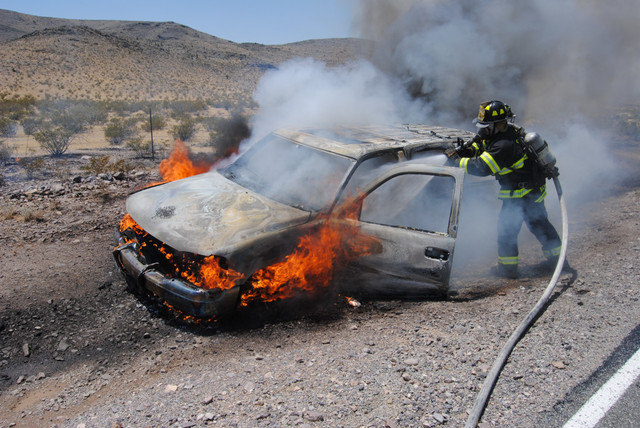 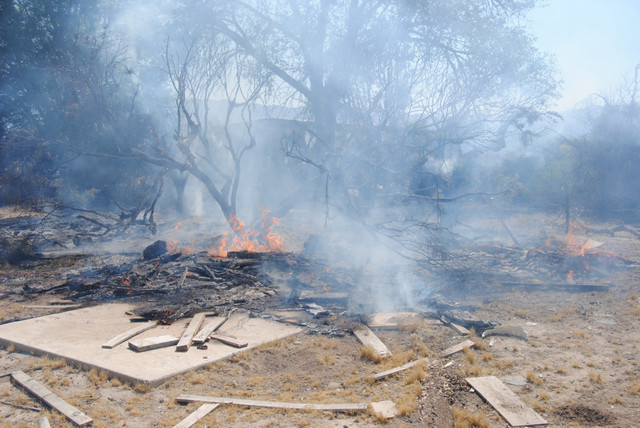 A motorcyclist was transported to Desert View Hospital on Friday following a collision with a NHP cruiser.

The collision occurred along South Highway 160 near Gravel Pit Road just after 5 p.m.

Pahrump Valley Fire and Rescue Services Chief Scott Lewis said the motorcyclist was evaluated on scene, where his injuries were deemed serious enough for transport.

“We attempted to fly the patient via Mercy Air, however it was not available to us at the time and the patient was transported by ground to the local hospital.”

On Saturday, fire crews were dispatched for a structure fire behind the Pahrump Nugget Casino just after 3 p.m.

The area is known for numerous homeless camps in the area.

“Upon arrival, fire crews found a fully-involved motorhome that had been converted to a fixed-use structure,” Lewis said. “The occupant safely egressed out of the structure. There were exposures to vehicles and other trailers in the area. Crews held the fire to the structure of origin and the fire is under investigation as it is deemed suspicious in nature.”

Also on Saturday, Pahrump fire crews were summoned to a structure fire in Amargosa Valley on a mutual aid assignment just after 5 p.m.

“We dispatched a medic unit and an engine as well as a water tender to the scene,” Lewis said. “Upon arrival, they found a fully-involved single-wide trailer with exposures to the neighboring property. Fire crews commenced an exterior defensive attack and extinguished the fire without further extensions. There were no injuries reported.”

Lewis said upon arrival, crews found the driver trapped inside the vehicle.

“Crews completed a driver’s-side door removal and extricated the patient,” he said. “The patient was transferred to Mercy Air 21 for transport to UMC Trauma in Las Vegas.”

On Thursday, fire crews were summoned to the 2000 block of Scales Way after dispatchers received an unusual call for service just after 8 a.m.

“We were dispatched for a report of a person trapped in the mud,” Lewis said. “Upon arrival, fire crews found a person that was stuck in the mud as a result of a water pipe break on the property. The person was successfully rescued without incident.”

Later that day, emergency crews were dispatched to the 4000 block of Blosser Ranch Road, regarding a psychiatric emergency where an individual intentionally set themself on fire.

The patient was transported to Desert View Hospital without further incident.

Hours later, emergency crews were summoned to a passenger vehicle fire along Highway 160, near mile marker 26 just after 1 p.m.

“Upon arrival we found a fully-involved full-size SUV,” Lewis said. “The occupants had safely egressed, however the fire had extended to the nearby ground cover due to the winds and dry conditions. It extended to approximately a half acre of brush. The fire was quickly contained and there were no injuries reported.”

A dust devil gave new life to a ground-cover fire in the area of Kellogg Road and Oakridge roughly two hours later.

“On that same day we were dispatched for an unknown type of fire in that area,” Lewis said. “Upon arrival, crews found a moderate-sized brush and rubbish fire at the rear of the vacant structure. As crews were extinguishing that fire, a dust devil came through the area which started a secondary brush fire just to the southwest of the property. That fire was quickly addressed and contained. BLM crews heard our radio traffic and also came out to that call.”

Lewis noted that crews completely extinguished the fires within a half hour. No injuries were reported.