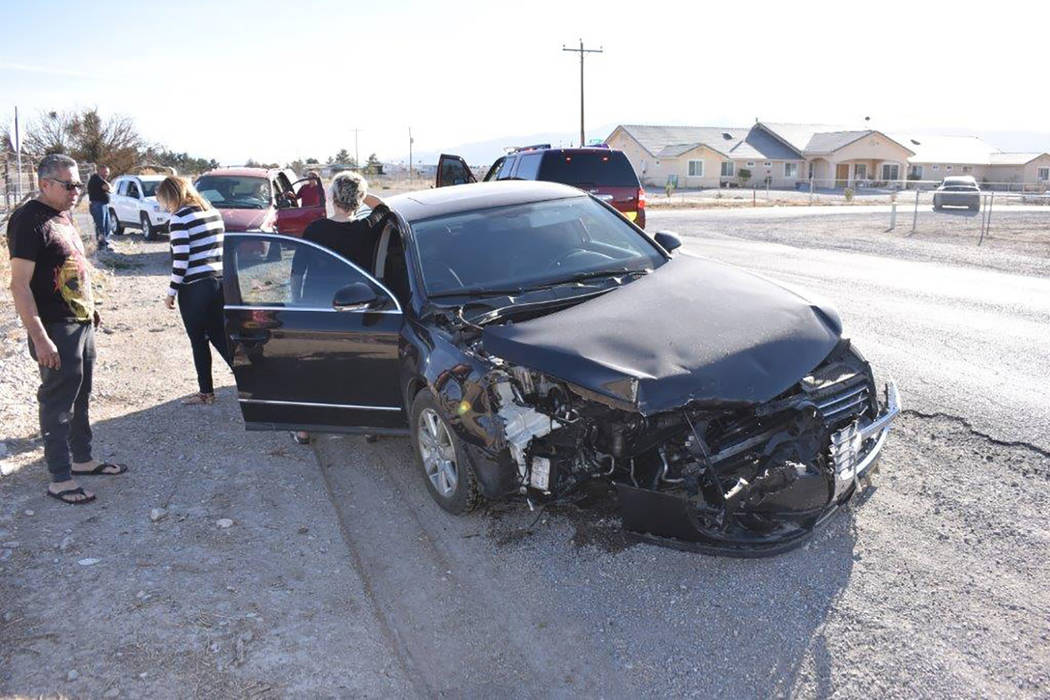 Special to the Pahrump Valley Times Pahrump fire crews responded to a motor vehicle collision along Money Street on Sunday, Feb. 4, just before 5 p.m. One person, who was medically entrapped inside their vehicle was transported to Desert View Hospital, with non-life-threatening injuries. 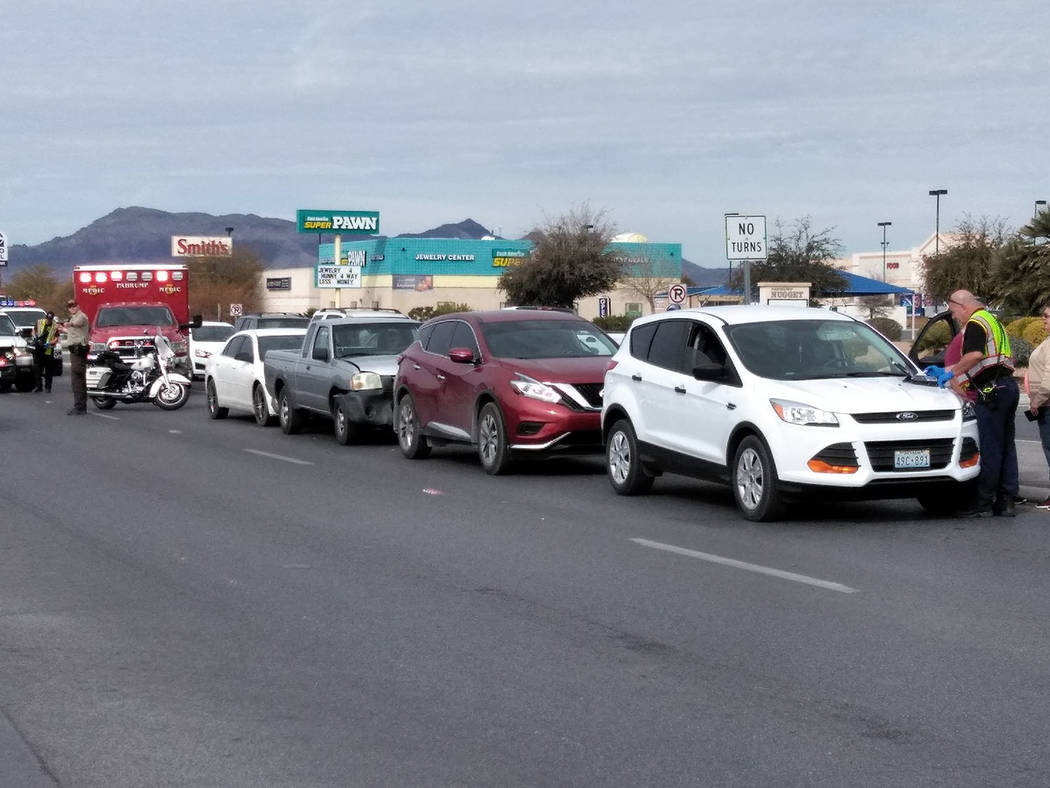 Special to the Pahrump Valley Times A four-vehicle crash along Highway 160, near Highway 372 snarled traffic for more than an hour on Thursday, Feb. 1. Pahrump fire crews tended to the injured, but none were transported following the 11:30 a.m. crash. Local sheriff's deputies and a Nevada Highway Patrol Trooper also responded to the scene to assist with traffic control. 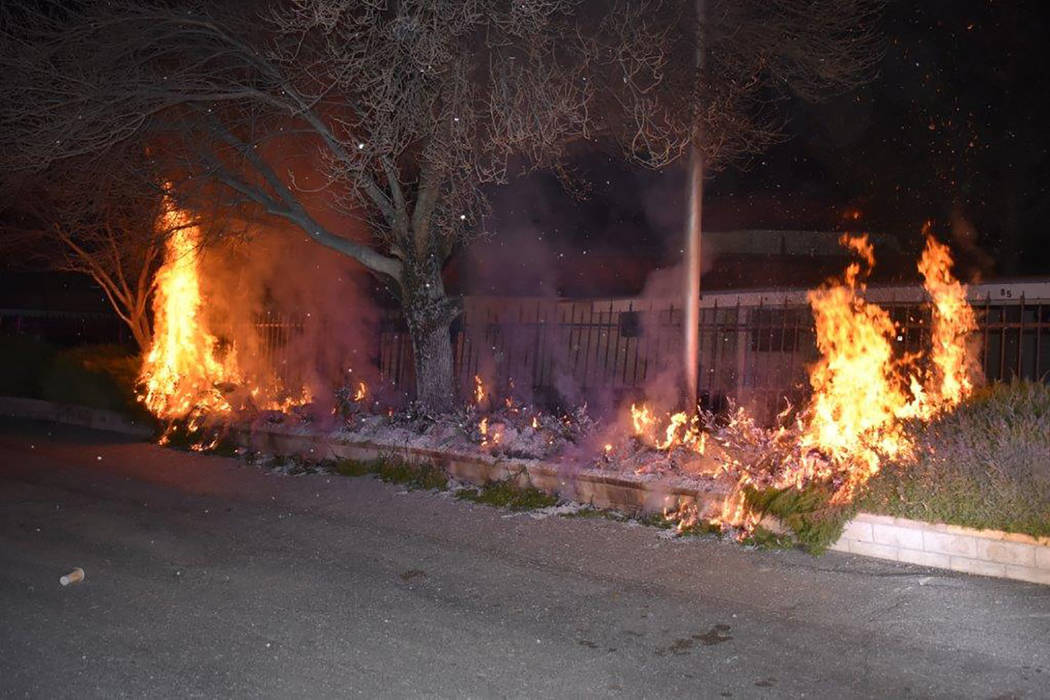 Special to the Pahrump Valley Times Pahrump fire crews responded to a brush fire running along the roadway in the area of Bourbon Street and Nail Creek Court at 9 p.m. on Sunday evening. Fire Chief Scott Lewis said the flames were fueled by mixed-brush and mature trees. The fire was quickly under control within minutes of their arrival. There were no injuries reported, and the cause of the fire is under investigation.

No serious injuries were reported following a four-vehicle crash along Highway 160 near Highway 372.

The crash occurred on Thursday, Feb. 1 just before 11:30 a.m in the southbound lanes near the entrance of McDonald’s restaurant.

Pahrump fire crews, along with Nye County Sheriff’s Office deputies, responded to the scene along with a Nevada Highway Patrol trooper.

Traffic flow along the southbound lanes was at a veritable standstill as crews worked to assess the occupants of the vehicles.

No transport was necessary as all apparent injuries were minor.

“Upon arrival, crews found an accessory outbuilding at the rear of the property that was well involved,” Lewis said. “The fire was surrounded by closely exposed materials. Crews commenced a defensive attack and controlled the fire with no further extension.”

The exact cause of the fire remains under investigation, Lewis said. No injuries were reported.

“Upon arrival, crews found the two-vehicle accident, as reported with one occupant medically entrapped,” Lewis said.

“The response was then upgraded to a rescue assignment, where crews used makeshift aids to force entry on the door of the vehicle, allowing access to the patient. That patient was extricated and then transported to the local hospital.”

Roughly a few hours later, just before 8 p.m., crews were dispatched for a motor vehicle collision involving a pedestrian along the 2600 block of North Alvin Street.

“Upon arrival, crews found the accident as reported where a vehicle had run over a woman’s foot,” Lewis said.

“That patient was medically assessed and transported to the local hospital,” he said.

Fire crews were also dispatched for a report of a brush fire in the area of Bourbon Street and Nail Creek Court at approximately 9 p.m. on Sunday.

Upon arrival, crews located an advanced brush fire running alongside the roadway.

“There were no immediate structure exposures and that fire was quickly controlled with no further extension. There were no injuries reported, and the cause of that fire is under investigation.”