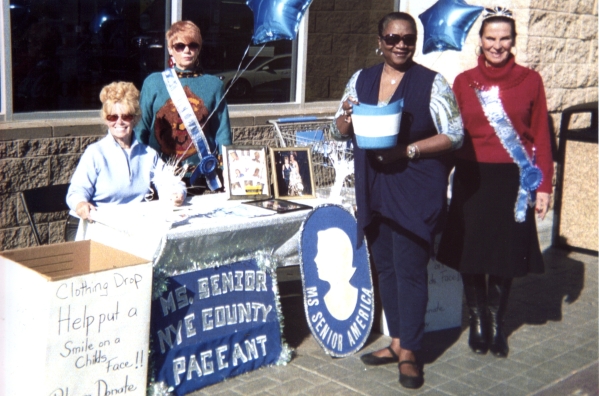 As such, Kelly-Vignato took steps to help alleviate the situation.

“The more I saw this problem, I realized I had to do something,” she said. “I decided to get some extra help, but I started doing this even before I won the Ms. Senior Nye County Pageant. I love working with children and I saw the fact that Manse Elementary School needed some help, so I started collecting the clothes myself.”

Along with her Queen’s Court, Kelly-Vignato set up shop in front of Walmart late last year where she asked patrons to contribute to her effort.

It appears to have worked.

“We asked that they purchase an item of clothing, a school supply, or a small cash donation so we could help these kids,” she said. “Walmart was just fantastic and this time we got new clothing because the customers would actually purchase the clothes. Some gave a small cash donation, which gave us the $250 check.”

When classes resumed after Christmas break, Kelly-Vignato said she presented the check to Manse along with the clothing and school supplies. The money could be used any way Manse officials saw fit.

“The school was thrilled,” she said. “With so much bullying going on, I just didn’t want another kid to commit suicide because they don’t have decent clothes to wear. This wasn’t my platform, it was just something I decided to do on my own, and I left the school with a happy heart.”

With roughly two months until the 2016 pageant, Kelly-Vignato reflected on her reign during this past year.

“My reign has been phenomenal,” she said. “With joining the pageant, I got into the Nye County Starlets dance group, where we do a lot of charitable, non-profit pursuits. It has really been rewarding and I’ve had a good reign. My pageant director, Scotty Winegar, is just great. If any woman has reached the age of elegance 60 years or more and would like to join our pageant family please contact Scotty Winegar at (775)-727-0309. The next Ms. Senior Nye County Pageant is April 16.”