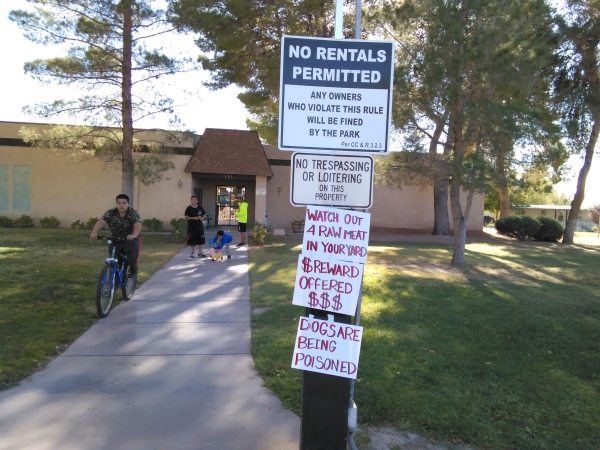 Residents of Comstock Park want answers after five dogs were allegedly poisoned within a week this month.

Her second dog, Apache, was also poisoned but has since recovered.

All told, Miers said she knows of at least five dogs in her neighborhood that have died just within the past two weeks, while others were poisoned and got sick.

“It was early in the afternoon that Max started vomiting,” she said. “As the day progressed, he started seizing and vomiting straight liquid. It wasn’t food. He couldn’t go outside again because he couldn’t move. If you barely touched him he would just fall over.”

Not knowing what the problem was, Miers and Woolbert took the dog to a local veterinary hospital for treatment.

Miers said she was forced to take her dog to multiple vets for treatment, while noting she did not appreciate the way she was personally treated by the first two clinics.

“We took Max to the first two vets, and they wouldn’t even see him if you didn’t have a $100 bill in your hand,” she said. “We had the money, but it was at home. The third that we went to was a fantastic vet on Homestead Road and he confirmed Max was poisoned. When we mentioned Max was throwing up something that looked like egg whites, the vet said that was something that doesn’t happen unless they are poisoned or they’ve ingested something that’s not good for their stomachs. He said it could have been antifreeze or rat poison that killed Max.”

With the poisoning confirmed by the vet, Miers and Woolbert reported the incident to the Nye County Sheriff’s Office, after gathering evidence from the fenced-off front yard.

Woolbert said she found sliced hot dogs and bacon in the dog’s vomit.

She noted the hot dogs appeared to have been hollowed out.

“I found some tiny brown pellets in the food itself that I picked up off the ground and gave to the sheriff’s deputy,” Woolbert said. “It was in the vomit and I also found bacon that was stained with some kind of white substance. I’m not entirely sure about what it was that was on the bacon. She was here a long time and took a full report. I asked if they knew who was poisoning the dogs and they told me they had a pretty good idea, so they are aware of this.”

A press release from the sheriff’s office on Monday noted the agency has received four different complaints of poisoned dogs in the Comstock Park area and detectives have been assigned to the ongoing investigation.

With the investigation underway, Miers is now trying to think of a motive for the poisonings.

She said to her knowledge, the dogs never bothered anyone.

“My dogs don’t leave the yard and they are the quietest and nicest dogs ever,” she said. “He doesn’t bother anybody, he doesn’t leave the fenced area. Max never barked after 10 o’clock at night and neither did Apache. I’ve had Max for about 2 years and he was almost 3 years old when he died. He was a family dog and he was my companion.”

Additionally, Miers, without mentioning anyone by name, said she and others in her neighborhood do have a suspect in mind.

“There is a young kid who lives in the park and I am sure he is the one who did it, because he was seen tossing stuff over my fence by two people whose dogs were also poisoned,” she said. “They told me they talked to somebody who saw a young blonde kid walking down the street throwing stuff into people’s yards. I want this kid stopped and I want him in jail. I want him to have to see what my dogs went through because my granddaughter and I watched all of it.”

Though the ordeal has left Miers and Woolbert without their longtime companion, both praised the efforts of the staff at Homestead Animal Hospital.

“His office crew knew I didn’t have a lot of money but they did everything they could possibly do for Max and they offered to pay for Max’s vet bill but I’m not going to let them do that,” Miers said.

The sheriff’s office believes the poisonings are all related and urges anyone with information to contact detectives at 775-751-7000 or confidentially via email at ncso_detectives@co.nye.nv.us.